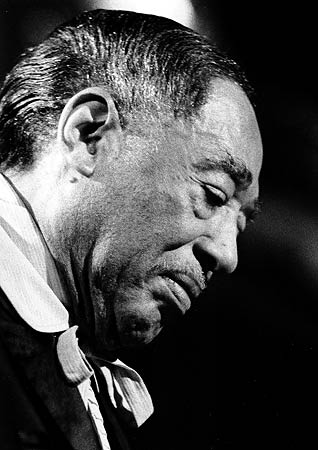 One of the originators of big-band jazz, Duke Ellington led his band for more than half a century, composed thousands of scores, and created one of the most distinctive ensemble sounds in all of Western music. Duke Ellington called his music "American Music" rather than jazz. Although he was a gifted piano player, Duke Ellington's orchestra was his principal instrument.

Duke Ellington influenced millions of people both around the world and at home. He gave American music its own sound for the first time. In his fifty year career, he played over 20,000 performances in Europe, Latin America, the Middle East as well as Asia. Duke Ellington is best remembered for the over 3000 songs that he composed during his lifetime., including "It Don't Mean a Thing if It Ain't Got That Swing", "Sophisticated Lady", "Mood Indigo", “Solitude", "In a Mellotone", and "Satin Doll".

Edward Kennedy Ellington was born on April 29, 1899 to James Edward Ellington and Daisy Kennedy Ellington. They lived with his maternal grandparents in the West End neighborhood of Washington, D.C. His father, James Edward Ellington was born in Lincolnton, North Carolina and Daisy Kennedy, was born in Washington, D.C., the daughter of a former American slave. James Ellington made blueprints for the United States Navy. He also worked as a butler for Dr. Middleton F. Cuthbert, a prominent white physician, and occasionally worked as a White House caterer. Daisy and J.E. were both pianists. She primarily played parlor songs and he operatic airs.

At the age of seven Ellington began taking piano lessons from Marietta Clinkscales. Daisy surrounded her son with dignified women to reinforce his manners and teach him to live elegantly. Ellington’s childhood friends noticed that "his casual, offhand manner, his easy grace, and his dapper dress gave him the bearing of a young nobleman", and began calling him Duke. Ellington credited his "chum" Edgar McEntree for the nickname. "I think he felt that in order for me to be eligible for his constant companionship, I should have a title. So he called me Duke."

Though Ellington took piano lessons, he was more interested in baseball. "President Teddy Roosevelt  would come by on his horse sometimes, and stop and watch us play," he recalled. Ellington went to Armstrong Technical High School in Washington, D.C. He got his first job selling peanuts at Washington Senators baseball games.

In the summer of 1914, while working as a soda jerk at the Poodle Dog Cafe, he wrote his first composition, "Soda Fountain Rag" (also known as the "Poodle Dog Rag"). Ellington created "Soda Fountain Rag" by ear, because he had not yet learned to read and write music. In his autobiography, Music is my Mistress (1973), Ellington said he missed more lessons than he attended, feeling at the time that playing the piano was not his talent. Ellington started sneaking into Frank Holiday's Poolroom at the age of fourteen. Hearing the poolroom pianists play ignited Ellington's love for the instrument and he began to take his piano studies seriously.

Ellington first played in New York City in 1923. Later that year he moved there and, in Broadway nightclubs, led a sextet that grew in time into a 10-piece ensemble. During the formative Cotton Club years, Duke Ellington experimented with and developed the style that would quickly bring him worldwide success and recognition. Ellington would be among the first to focus on musical form and composition in jazz using ternary forms and "call-and-response" techniques.  Radio broadcasts from the Cotton Club made Ellington famous across America and also gave him the financial security to assemble a top notch band that he could write music specifically for.

The Duke Ellington Orchestra left the Cotton Club in 1931, although he would return on an occasional basis throughout the rest of the Thirties, and toured the U.S. and Europe. Unlike many of their contemporaries, the Ellington Orchestra was able to make the change from the Hot Jazz of the 1920s to the Swing music of the 1930s. The song "It Don't Mean a Thing (If It Ain't Got That Swing" even came to define the era.

Although Duke Ellington's popularity began to wane after World War II, his appearance at the Newport Jazz Festival on July 7, 1956 returned him to wider prominence and exposed him to new audiences. The feature "Diminuendo and Crescendo in Blue", with saxophonist Paul Gonsalves's six-minute saxophone solo, had been in the band's book since 1937, but on this occasion nearly created a riot. Such Sweet Thunder in 1957, based on Shakespeare's plays and characters, and The Queen's Suite, dedicated to Queen Elizabeth II, were products of the renewed impetus which the Newport appearance helped to create.

In the early 1960s, Ellington embraced recording with artists who had been fierce rivals of the past, or who had been young artists from the Bebop beginnings whom he didn't associate with. The Ellington and Count Basie orchestras recorded together. During a period when he was between recording contracts he made a records with Louis Armstrong (Roulette), Coleman Hawkins, John Coltrane (both for Impulse) and participated in a session with Charles Mingus and Max Roach which produced the Money Jungle  album.

Among Ellington's many honors and awards were honorary doctorates from Howard and Yale Universities. Duke Ellington was awarded the Grammy Lifetime Achievement Award in 1966. He was later awarded several other prizes, the Presidential Medal of Freedom in 1969, and the Legion of Honor by France in 1973, the highest civilian honors in each country.