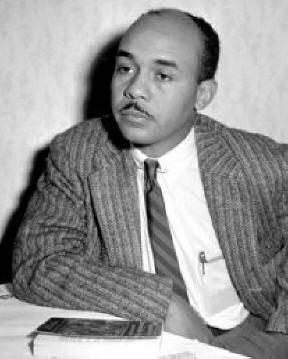 Ralph Ellison is an African-American writer, teacher, whose novel "Invisible Man" (1952) gained a wide critical success. Ellison has been compared to such writers as Melville and Hawthorne. He has used racial issues to express universal dilemmas of identity and self-discovery but avoided taking a straightforward political stand. "Literature is colorblind," he once said. Many artists of the Black Arts movement rejected Ellison for his insistence that America be a land of cultural exchange and synergy. Talented in many fields, Ellison also was an accomplished jazz trumpeter and a free-lance photographer.

Ralph Waldo Ellison was born on March 1, 1914, in Oklahoma City, Oklahoma.  From his birth, Ellison’s parents knew he was bound for prosperity.  His father even named him for the great writer Ralph Waldo Emerson in an effort to ensure such success.  As Ellison himself says in reference to his parents, “no matter what their lives had been, their children's lives would be lives of possibility.”  Mrs. Ellison, a maid, would bring home books, magazines, and record albums that had been discarded in the homes she cleaned.  Ralph and his brother, Herbert, were supplied with chemistry sets, toy typewriters, and a roll top desk so that they would have the tools to succeed.

In 1933, Ellison entered the Tuskegee Institute on a scholarship to study music. Tuskegee's music department was perhaps the most renowned department at the school, headed by the conductor William L. Dawson. Ellison also had the good fortune to come under the close tutelage of the piano instructor Hazel Harrison. While he studied music primarily in his classes, he spent increasing amounts of time in the library, reading up on modernist classics. He specifically cited reading The Waste Land as a major awakening moment for him.

After his third year, Ellison moved to New York City to study the visual arts. He studied sculpture and photography. He made acquaintance with the artist Romare Bearden. Perhaps Ellison's most important contact would be with the author Richard Wright, with whom he would have a long and complicated relationship. After Ellison wrote a book review for Wright, Wright encouraged Ellison to pursue a career in writing, specifically fiction. The first published story written by Ellison was a short story entitled "Hymie's Bull," a story inspired by Ellison traveling as a hobo on a train with his uncle to get to Tuskegee. From 1937 to 1944 Ellison had over twenty book reviews as well as short stories and articles published in magazines such as New Challenge and New Masses.

In 1943 Ralph Ellison joined the United States Merchant Marines returning to New York after the war. Awarded a Rosenwald fellowship he was able to concentrate on his writing and, seven years after starting it, his masterpiece Invisible Man (1952) was published. Immediately recognized as a classic in its own time, and described as a "touchstone of the 1950s", it won the American National Book Award and established Ellison as one of the major figures of twentieth-century fiction.

In Invisible Man, Ralph Ellison tells a story of a nameless Afro-American man, who is losing his sense of identity in a world of prejudice and hostility. He has an underground cellar to solve his relationship with the rest of the society. In the dark there is no colors and to fill the space with light he burns 1,369 bulbs. Before becoming free from all illusions, the narrator makes a feverish, Dantesque journey through his experiences in a segregated community in South to the North.

Ellison’s Invisible Man was educated, articulate, and self-aware. Ellison’s view was that the African-American culture and sensibility was far from the downtrodden, unsophisticated picture presented by writers, sociologists and politicians, both black and white. He posited instead that blacks had created their own traditions, rituals, and a history that formed a cohesive and complex culture that was the source of a full sense of identity. When the protagonist in Invisible Man comes upon a yam seller (named Petie Wheatstraw, after the black folklore figure) on the streets of Harlem and remembers his childhood in a flood of emotion, his proclamation “I yam what I yam!” is Ellison’s expression of embracing one’s culture as the way to freedom.

In 1964, Ellison published Shadow and Act, a collection of essays, and began to teach at Rutgers University and Yale University, while continuing to work on his novel. The following year, a survey of 200 prominent literary figures was released that proclaimed Invisible Man the most important novel since World War II.

In 1967, Ellison experienced a major house fire at his home in Plainfield, Massachusetts, in which he claimed more than 300 pages of his second novel manuscript were lost. The scope of Ellison’s mind and vision may have contributed to the growing unwieldiness of his much-awaited second novel, which he toiled over for forty years. He planned it as three books, a saga that would encompass the entire American experience. The book was still unfinished when Ellison died in New York in 1994 at the age of eighty.