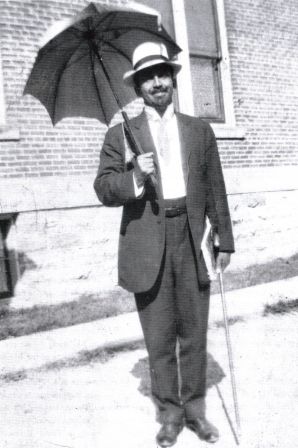 An outstanding critic, editor, scholar, author, and civil rights leader, W. E. B. Du Bois is certainly among the most influential blacks of the twentieth century.

Du Bois was born in the small New England village of Great Barrington, Massachusetts, three years after the end of the Civil War. Unlike most black Americans, his family had not just emerged from slavery. His great-grandfather had fought in the American Revolution, and the Burghardts had been an accepted part of the community for generations. He was was raised largely by his mother, who imparted to her child the sense of a special destiny. She encouraged his studies and his adherence to the Victorian virtues and pieties characteristic of rural New England in the 19th century. Du Bois in turn gravely accepted a sense of duty toward his mother that transcended all other loyalties. She passed away shortly before he left for college

Du Bois did well in school and worked part time at the local newspaper. Although he had dreamt of attending Harvard, he first attended Fisk University in Nashville. This was Du Bois' first glimpse of the southern life of African Americans, and the injustice left a strong mark on Du Bois. Later W. E. B. Du Bois received a scholarship to Harvard, but he took the hard lessons of of the South with him. Graduating from Harvard cum laude, Dub Bois gave a moving political speech on Jefferson Davis, President of the Confederacy during the Civil War, which made news in the national press. It would be the first of many scholarly honors he would receive and also the turning of heads. Studying in Europe was a dream of DuBois' and after earning his M.A. in History at Harvard he went on to study at the University of Berlin with some of the great German minds in philosophy and sociology and economics. DuBois returned to the states to become the first man of African descent to receive a Ph.D from Harvard University.

In 1897, Du Bois directed the Atlanta Conferences which convened annually to generate concise scientific research on the living conditions of African Americans. From those conferences he collected, collated, and analyzed socioeconomic data about every conceivable facet of being a black person in America. Ambitious at the time and still is he published about sixteen volumes on his findings.

In 1903, W.E.B. Du Bois  published his first of remembered works The Philadelphia Negro and later the Souls of Black Folks. The latter being his most prophetic and remembered. The Souls of Black Folks included an attack on Booker T. Washington for not doing more in the campaign for African American civil rights. Du Bois own solution to this problem was to join forces with William Monroe Trotter to form the Niagara Movement in 1905. The group drew up a plan for aggressive action and demanded: manhood suffrage, equal economic and educational opportunities, an end to segregation and full civil rights.

The Niagara Movement had little impact on influencing those in power and in February, 1909, Du Bois joined with other campaigners for African American civil rights to form the National Association for the Advancement of Colored People (NAACP).

W.E.B. Du Bois' essays on race and society and economics were published in such journals as The Independent, Nation, The Southern Workman, Harper's Weekly, World's Work, The Outlook, The Missionary Review, the Literary Digest, the annals of the American Academy of Political and Social Science and the Dial. Du Bois plunged himself into anthropological, sociological, historical, economic, and philosophical studies of blacks in America hoping to elude a "cure" for the race problem in America.

The NAACP started its own magazine, Crisis, in November, 1910. The magazine was edited by Du Bois and contributors to the first issue included Oswald Garrison Villard and Charles Edward Russell. The magazine soon built up a large readership amongst black people and white sympathizers. By 1919 Crisis was selling 100,000 copies a month. In Crisis Du Bois campaigned against lynching, Jim Crow laws, and sexual inequality.

Du Bois was one of a number of African-American leaders investigated by the FBI, which claimed in May 1942 that, "his writing indicates him to be a socialist". He was chairman of the Peace Information Center at the start of the Korean War, and among the signers of the Stockholm Peace Pledge, which opposed the use of nuclear weapons.

In 1950, at the age of 82, Du Bois ran for U.S. Senator from New York on the American Labor Party ticket and polled a little over 200,000 votes, about 4% of the total. Although he lost, Du Bois remained committed to the progressive labor cause. In 1958, he would join with Trotskyites, ex-Communists and independent radicals in proposing the creation of a united left-wing coalition to challenge for seats in elections for the New York State Senate and Assembly.

At the age of 91 William Du Bois moved to Ghana where he became a naturalized citizen. When he left America to become a citizen of Ghana in 1961, he did not do so as a rejection of his countrymen. Returning to the land of his forefathers marked a resolution of many conflicts with which Du Bois had struggled all his life. He died on 27th August, 1963 and was honored by a state funeral and buried in Accra.