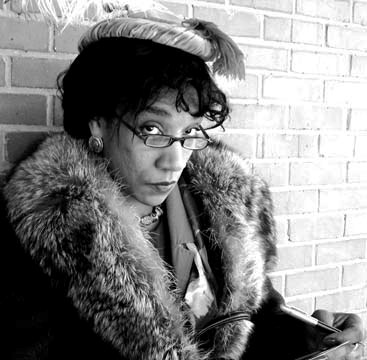 Zora Neale Hurston, born in Eatonville, Florida, was a noted novelist, folklorist and anthropologist who traveled throughout Florida collecting and writing stories of rural people. She was a major figure of the Harlem Renaissance in the 1920's and was part of the Federal Writers' Project in Florida in 1938. A recipient of Guggenheim and Rosenwald fellowships, Zora Neale Hurston's most prominent works include Mules and Men, Dust Tracks in the Road, and Their Eyes Were Watching God. Eatonville annually holds the Zora Neale Hurston Festival, a tribute to Hurston’s lasting literary accomplishments.

Zora Hurston was the fifth of eight children of John  and Lucy Ann Hurston. Her father was a Baptist preacher, tenant farmer, and carpenter, and her mother was a school teacher. Zora Neale Hurston was born somewhere between 1891-1901. Because throughout her life she was dishonest about her age no one is quite sure of her year of birth. She was born in the town of Eatonville, Florida. Eatonville is five miles from Orlando. It was an all African American town and was not a ghetto or a slum. Eatonville was the first all black community to be incorporated. In childhood Hurston grew up uneducated and poor, but she was immersed with black folk life. She had little experience with racism early on since the town was all one race. This caused her to have unconventional attitudes later in life which alienated her from others.

Her father later became mayor of the town, which Hurston would glorify in her stories as a place black Americans could live as they desired, independent of white society. Hurston spent the remainder of her childhood in Eatonville, and describes the experience of growing up in Eatonville in her 1928 essay "How It Feels to Be Colored Me". Zora's mother died when she was nine years old, and her father soon remarried. After her relationship with her stepmother rapidly declined, her father sent her to school in Jacksonville, Florida. Hurston greatly missed her mother and the warm, loving family atmosphere that she had grown up in. Hurston found herself being passed from relative to relative, while working as a nanny and a housekeeper.

In 1918, Zora Hurston began undergraduate studies at Howard University, where she became one of the earliest initiates of Zeta Phi Beta Sorority and co-founded The Hilltop, the University's student newspaper. Hurston left Howard in 1924 and in 1925 was offered a scholarship to Barnard College where she was the college's sole black student. Hurston received her B.A. in anthropology in 1927, when she was 36. While she was at Barnard, she conducted ethnographic research with noted anthropologist Franz Boas of Columbia University. She also worked with Ruth Benedict as well as fellow anthropology student Margaret Mead. After graduating from Barnard, Hurston spent two years as a graduate student in anthropology at Columbia University.

When Zora Hurston arrived in New York City in 1925, the Harlem Renaissance was at its peak, and she soon became one of the writers at its center. In 1926, a group of young black writers including Zora Hurston, Langston Hughes, and Wallace Thurman, calling themselves the Niggerati, produced a literary magazine called Fire!! that featured many of the young artists and writers of the Harlem Renaissance.

By the mid-1930s, Zora Hurston had published several short stories and the critically acclaimed Mules and Men, a groundbreaking work of "literary anthropology" documenting African American folklore. In 1930, she also collaborated with Langston Hughes on Mule Bone: A Comedy of Negro Life in Three Acts, a play that was never finished, although it was published posthumously in 1991. Hurston's first three novels were also published in the 1930s: Jonah's Gourd Vine ; Their Eyes Were Watching God, written during her fieldwork in Haiti and considered her masterwork; and Moses, Man of the Mountain. In 1937, Hurston was awarded a prestigious Guggenheim Fellowship to conduct ethnographic research in Jamaica and Haiti. Tell My Horse documents her account of her fieldwork studying African rituals in Jamaica and voudon rituals in Haiti.

In the 1940s, Zora Hurston's work was published in such periodicals as The American Mercury and The Saturday Evening Post. Her last published novel, Seraph on the Suwanee, notable principally for its focus on white characters, was published in 1948. In 1954, Zora Hurston was assigned by the Pittsburgh Courier to cover the small-town murder trial of Ruby McCollum, the prosperous black wife of the local bolita racketeer, who had killed a racist white doctor. She also contributed to Woman in the Suwanee County Jail, a book by journalist and civil rights advocate William Bradford Huie.

During a period of financial and medical difficulties,  Zora Hurston was forced to enter St. Lucie County Welfare Home, where she suffered a stroke and died of hypertensive heart disease. She was buried in an unmarked grave in the Garden of Heavenly Rest cemetery in Fort Pierce. In 1973 African-American novelist Alice Walker and literary scholar Charlotte Hunt found an unmarked grave in the general area where Hurston had been buried in Fort Pierce, Florida and decided to mark it as hers.