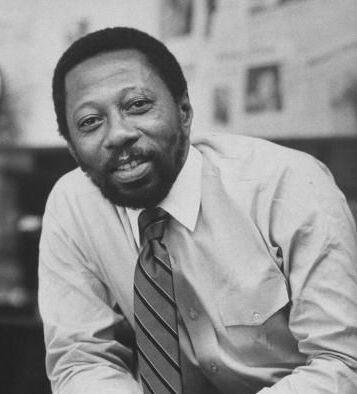 Robert C. Maynard, a charismatic leader who changed the face of American journalism, built a four decade career on the cornerstones of editorial integrity, community involvement, improved education and the importance of the family. He was the co-founder of the Institute for Journalism Education, a nonprofit corporation dedicated to expanding opportunities for minority journalists at the nation's newspapers. In the past 20 years, it has trained hundreds of America's journalists of color, more than any other organization.

Maynard was born on June 17, 1937. He was one of six children born to Samuel C. Maynard and Robertine Isola Greaves, both immigrants from Barbados. At 16 years old, he dropped out of Brooklyn High School to pursue his passion for writing.

Maynard’s career in journalism began in 1961 at York Gazette & Daily in York, Pennsylvania. In 1966, he received a Nieman fellowship to Harvard University and joined the editorial staff of the Washington Post the following year.

In 1977, Maynard co-founded the Institute for Journalism Education, a nonprofit organization dedicated to training journalists of color and providing accurate representation of minorities in the news media. For more than thirty years, the Institute has trained over 1000 journalists and editors from multicultural backgrounds across the United States.

For more than 23 years, the Maynard Institute for Journalism Education (MIJE) has prepared newspaper professionals and managers to operate effectively and creatively in multicultural communities.

The Maynard Institute annually conducts the five-week Management Training Center at Northwestern University's J.L. Kellogg Graduate School of Management and the five-week Editing Program at the University of California, Berkeley's Graduate School of Journalism. The Institute's week-long Cross-Media Journalism program offers storytelling techniques and strategies for broadcast, print, and the Internet at sites across the country.

MIJE's History Project documents and preserves an untold era of American journalism by chronicling the contributions of a generation of black journalists who changed mainstream news coverage. Highlights include an online serial, "The Caldwell Journals," a personal account of the black journalist movement written by legendary reporter and columnist Earl Caldwell. 2001 marks the launch of an oral histories collection at the Freedom Forum's First Amendment Center in New York.

In 1979, Maynard took over as editor of The Oakland Tribune and became the first African American to own a major metropolitan newspaper after purchasing the paper two years later. He is widely recognized for turning around the then struggling newspaper and transforming it into a 1990 Pulitzer Prize winning journal.

After a decade of ownership by Bob and Nancy Maynard, the newspaper had won hundreds of awards for editorial excellence. One media critic described the change: "The Tribunecovers the Oakland area with far more insight than do its wealthier competitors in nearby San Francisco and the suburbs, and the paper has become a kind of journalistic farm team for larger papers such as the Los Angeles Times.

Maynard greatly valued community involvement. He taught at local high schools and frequently attended community forums. His positive, proactive outlook helped many in need including children of cocaine-addicted mothers and earthquake and firestorm victims. Maynard wielded the outreach of his newspaper to better the community by pushing for improved schools, trauma care centers, and economic development.

Robert Maynard was a board member of the industry's most prestigious organizations, including the Pulitzer Prize, The Associated Press, and the American Society of Newspaper Editors. It was his lobbying in the 1970s that nudged the ASNE to adopt the goal of diversifying America's newsrooms by the year 2000.

In the 1980s, Maynard began a twice-weekly syndicated newspaper column, in which he transformed national and international issues into dinner table discussions of right and wrong. His views were widely broadcast through regular appearances on "This Week With David Brinkley" and the "MacNeil Lehrer Report."

"This country cannot be the country we want it to be if its story is told by only one group of citizens. Our goal is to give all Americans front door access to the truth," he said in May of 1993 during his last public address, to college students at The Freedom Forum, in Arlington, Va.

The Institute he co-founded with his second wife Nancy Hicks Maynard (1947–2008) was renamed in his honor after his death from prostate cancer in 1993. His daughter, Dori J. Maynard, has since become President and CEO of the Robert C. Maynard Institute for Journalism Education.