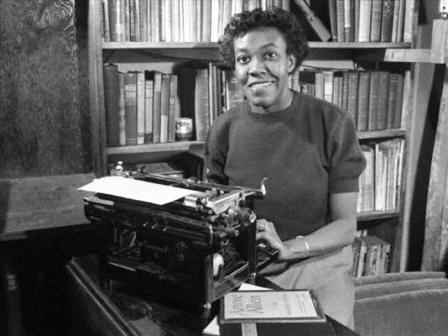 Gwendolyn Brooks was a highly regarded, much-honored poet, with the distinction of being the first black author to win the Pulitzer Prize. She also was poetry consultant to the Library of Congress, the first black woman to hold that position, and poet laureate of the State of Illinois. Many of Brooks' works display a political consciousness, especially those from the 1960s and later, with several of her poems reflecting the civil rights activism of that period.

Gwendolyn Brooks was born on 7 June 1917 in Topeka, Kansas, the first child of David and Keziah Brooks. The family moved to Chicago shortly after her birth, and despite her extensive travels and periods in some of the major universities of the country, she has remained associated with the city's South Side. What her strong family unit lacked in material wealth was made bearable by the wealth of human capital that resulted from warm interpersonal relationships. When she writes about families that, despite their daily adversities, are not dysfunctional, Gwendolyn Brooks writes from an intimate knowledge reinforced by her own life.

Brooks attended Hyde Park High School, the leading white high school in the city, but transferred to the all-black Wendell Phillips, then to the integrated Englewood High School. In 1936 she graduated from Wilson Junior College. These four schools gave her a perspective on racial dynamics in the city that continues to influence her work.

Brooks was thirteen when her first published poem, "Eventide," appeared in American Childhood; by the time she was seventeen she was publishing poems frequently in the Chicago Defender, a newspaper serving Chicago's black population. After such formative experiences as attending junior college and working for the National Association for the Advancement of Colored People, she developed her craft in poetry workshops and began writing the poems, focusing on urban blacks, that would be published in her first collection, A Street in Bronzeville.  It was published in 1945 by Harper and Row and brought her instant critical acclaim. She received her first Guggenheim Fellowship and was one of the “Ten Young Women of the Year” in Mademoiselle magazine. In 1950, she published her second book of poetry, Annie Allen, which won her Poetry magazine’s Eunice Tietjens Prize and the Pulitzer Prize for poetry, the first given to an African-American.

After John F. Kennedy invited her to read at a Library of Congress poetry festival in 1962, she began her career teaching creative writing. Brooks taught at Columbia College Chicago, Northeastern Illinois University, Elmhurst College, Columbia University, Clay College of New York, and the University of Wisconsin–Madison. In 1967, she attended a writer’s conference at Fisk University where, she said, she rediscovered her blackness. This rediscovery is reflected in her work In The Mecca, a book length poem about a mother searching for her lost child in a Chicago housing project. In The Mecca was nominated for the National Book Award for poetry.

In the 1950s Brooks published her first and only novel, Maud Martha, which details a black woman's life in short vignettes. It is "a story of a woman with doubts about herself and where and how she fits into the world. Maud's concern is not so much that she is inferior but that she is perceived as being ugly," related Harry B. Shaw in Gwendolyn Brooks. Maud suffers prejudice not only from whites but also from blacks who have lighter skin than hers, something that mirrors Brooks' experience. Eventually, Maud takes a stand for her own dignity by turning her back on a patronizing, racist store clerk.

After John F. Kennedy invited her to read at a Library of Congress poetry festival in 1962, she began her career teaching creative writing. She taught at Columbia College Chicago, Northeastern Illinois University, Elmhurst College, Columbia University, Clay College of New York, and the University of Wisconsin–Madison. In 1967, she attended a writer’s conference at Fisk University where, she said, she rediscovered her blackness. This rediscovery is reflected in her work In The Mecca, a book length poem about a mother searching for her lost child in a Chicago housing project. In The Mecca was nominated for the National Book Award for poetry.

Brooks decided to become more involved in the Black Arts movement. She became one of the most visible articulators of "the black aesthetic." Her "awakening" led to a shift away from a major publishing house to smaller black ones. While some critics found an angrier tone in her work, elements of protest had always been present in her writing and her awareness of social issues did not result in diatribes at the expense of her clear commitment to aesthetic principles. Consequently, becoming the leader of one phase of the Black Arts movement in Chicago did not drastically alter her poetry, but there were some subtle changes that become more noticeable when one examines her total canon to date.

From 1985-86 Brooks was Consultant in Poetry to the Library of Congress. In 1994, she was chosen as the National Endowment for the Humanities' Jefferson Lecturer, one of the highest honors for American literature and the highest award in the humanities given by the federal government. In 1995, she was presented with the National Medal of Arts. She also received an American Academy of Arts and Letters award, the Frost Medal, the Shelley Memorial Award, and fellowships from The Academy of American Poets and the Guggenheim Foundation.

In 1995, Gwendolyn Brooks was honored as the first Woman of the Year by the Harvard Black Men's Forum. On 1 May 1996 Brooks returned to her birthplace in Topeka, Kansas. She was the keynote speaker for the Third Annual Kaw Valley Girl Scout Council Women of Distinction Banquet and String of Pearls Auction. A ceremony was held in Brooks’ honor at a local park, located at 37th and Topeka Boulevard. She lived in Chicago until her death on December 3, 2000.