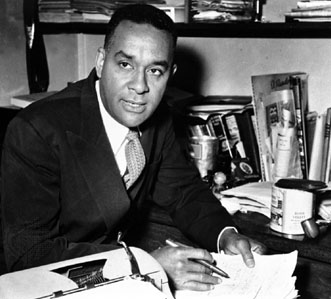 Richard Wright was an African American writer who gave a voice to the voiceless. He was the first commercially successful black novelist and unveiled the terrors of the ghetto. One of Wright's most famous works, Native Son, protested the treatment of blacks by white americans.

Richard Nathan Wright was born September 4, 1908 in Roxie, Mississippi, the son of Nathan Wright, an illiterate sharecropper, and Ella Wilson Wright, a schoolteacher, and the grandson of slaves. in 1913 the family, including Richard's younger brother Leon moved to Memphis Tennessee. Within a year after the move Nathan deserts his family for another woman and Richard's mother is forced to try to support the family as a cook.

Richard Wright attended school sporadically, often having to quit if his mother got ill or they were forced to move. Living back and forth in Arkansas, Tennesee and Mississippi, Wright was often beaten as a child. However, he continued to teach himself, secretly borrowing books from the whites-only library in Memphis.

Wright worked at various jobs, among others as a newspaper delivery boy and as an assistant to an insurance agent. His spare-time jobs enabled Wright to buy schoolbooks, pulp magazines, and dime novels, all of which he read avidly. At the age of fifteen, he wrote his first story, 'The Voodoo of Hell's Half-Acre'. It was published in Southern Register, a local black newspaper. Wright attended junior high school in Jackson, Mississippi, and graduated in 1925.

Leaving the Jim crow Laws behind, Wright took the train to Chicago in December 1927.  Working numerous odd jobs, by 1935 Richard Wright found work with the Federal Negro Theater in Chicago under the Federal Writers' Project. He wrote some short stories and a novel during this time, but they were not published until after his death.

In 1937 Richard Wright moved to New York City, where he was an editor on the Communist newspaper, Daily Worker, and wrote poetry for several communist journals. Wright gained national attention for the collection of four short stories titled Uncle Tom's Children in 1938. He based some stories on lynching in the Deep South. The publication and favorable reception of Uncle Tom's Children improved Wright's status with the Communist party and enabled him to establish a reasonable degree of financial stability. He was appointed to the editorial board of New Masses, and Granville Hicks, prominent literary critic and Communist sympathizer, introduced him at leftist teas in Boston. By May 6, 1938 excellent sales had provided him with enough money to move to Harlem, where he began writing Native Son.

Richard Wright's most famous novel Native Son is published in March of 1940  and the Book-of-the-Month Club offers it as a main selection. Though the book is banned in Birmingham, Alabama, libraries, Wright becomes internationally famous. Wright was criticized for his works' concentration on violence. In the case of Native Son, people complained that he portrayed a black man in ways that seemed to confirm whites' worst fears. The period following publication of Native Son was a busy time for Wright. In July 1940 he went to Chicago to do research for the text for a folk history of blacks to accompany photographs selected by Edwin Rosskam. While in Chicago he visited the American Negro Exhibition with Langston Hughes, Arna Bontemps and Claude McKay.

He then went to Chapel Hill, North Carolina, where he and Paul Green collaborated on a dramatic version of Native Son. In January 1941 Wright received the prestigious Spingarn Medal for noteworthy achievement by a black. Native Son opened on Broadway, with Orson Welles as director, to generally favorable reviews in March 1941. A volume of photographs almost completely drawn from the files of the Farm Security Administration, with text by Wright, Twelve Million Black Voices: A Folk History of the Negro in the United States was published in October 1941 to wide critical acclaim.

Wright's semi-autobiographical Black Boy (1945) described his early life from Roxie through his move to Chicago, his clashes with his Seventh-day Adventist family, his troubles with white employers and social isolation. American Hunger, published posthumously in 1977, was originally intended as the second volume of Black Boy. The Library of America edition restored it to that form.

In 1946 Wright was invited to France. After he returned to the United States he decided he could no longer tolerate the racism he experienced even in New York City. Married to a white woman and living in the North, he still was not able to buy an apartment as a black man; furthermore, he hated the stares he and his family received on the streets. And he was still called "boy" by some shopkeepers. So in 1947 he moved permanently to France and settled in Paris. Wright never again saw the United States.