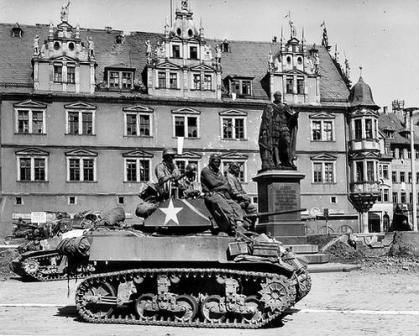 The 761st Tank Battalion was the last of the three United States Army segregated combat tank battalion during World War II. The unit was made up of African Americans soldiers, who by Federal law were not permitted to serve alongside white troops. They were known as the “Black Panthers” and their unit's motto was “Come out fighting."

The Black Panther Tank Battalion was attached to the XII Corps' 26th Infantry Division, assigned to Gen. George S. Patton Jr.'s Third Army, an army already racing eastward across France. As a result of their great fighting abilities the 761st Tank Battalion spearheaded a number of Patton's moves into enemy territory. They forced a hole in the Siegfried Line, allowing Patton's 4th Armored Division to pour through into Germany. They Black Panthers fought in France, Belgium, and Germany, and were among the first American forces to link up with the Soviet Army (Ukrainians) at the River Steyr in Austria.

The most famous member of the 761st was Second Lieutenant Jack Robinson. During the 761st's training, a white bus driver told Robinson to move to the back of the bus, and Robinson refused. Although his battalion commander, Lieutenant Colonel Paul L. Bates, refused to consider the court-martial charges put forward by the arresting Military Policemen, the base commander transferred Robinson to the 758th Tank Battalion, whose commander was willing to sign the insubordination court-martial consent. Robinson would eventually be acquitted of all charges, though he never saw combat. He became famous a few months later when he was instrumental in the desegregation of professional baseball.

The 758th trained on the M-5 light tank, which carried a crew of four. Powered by twin Cadillac engines, it could reach a maximum speed of 40 mph and had an open-road cruising range of 172 miles. It was armed with a .30 caliber machine gun mounted to fire along the same axis as the tank's main armament, a 37mm cannon. When the tracer bullets from the .30 caliber registered on a target, the cannon would be fired, hopefully scoring a direct hit. The M-5 was also armed with two more .30-caliber machine guns, one on the turret and one in the bow. The light tank was employed to provide fire support, mobility and crew protection in screening and reconnaissance missions.

The 5th Tank Group, commanded by Colonel LeRoy Nichols, was to be made up of black enlisted personnel and white officers. With the 758th Tank Battalion in place, two more tank battalions were needed to complete the 5th Tank Group.

On March 15, 1942, the War Department activated the 761st Tank Battalion (light) at Camp Claiborne, La., with a  strength of 36 officers and 593 enlisted men.  On September 15, 1943, the 761st Battalion moved to Camp Hood, Texas, for advanced training; there they changed from light to medium tanks.

General Ben Lear, Commander of the U.S. Second Army, rated the unit "superior" after a special review and deemed the unit "combat ready". After a brief deployment to England, the 761st landed in France via Omaha Beach on October 10, 1944. The unit, comprised of six white officers, thirty black officers, and 676 black enlisted men, was assigned to General George Patton's US Third Army at his request, attached to the 26th Infantry Division.

The tankers received a welcome from the Third Army commander, Lt. Gen. George S. Patton, Jr., who had observed the 761st conducting training maneuvers in the States: 'Men, you're the first Negro tankers to ever fight in the American Army. I would never have asked for you if you weren't good. I have nothing but the best in my Army. I don't care what color you are as long as you go up there and kill those Kraut sons of bitches. Everyone has their eyes on you and is expecting great things from you. Most of all your race is looking forward to you. Don't let them down and damn you, don't let me down!'

The 761st's mission was to take  the German strong hold in the town of Tillet. Every other American unit assigned to take the town had been beaten back. Tanks, artillery, and infantry inside the Ardennes Forest had assaulted Tillet and all had failed to take it. The operations of the 761st in the Bulge split the enemy lines at three points--the Houffalize*Bastogne road, the St. Vith*Bastogne highway, and the St. Vith*Trier road--preventing the resupply of German forces encircling American troops at Bastogne. After a week of steady fighting against entrenched SS troops, the 761st took Tillet and drove the Germans out in full retreat.

Later, as the armored spearhead for the 103rd Infantry Division, the 761st took part in assaults that resulted in the breech of the Siegfried Line. From March 20 to 23, 1945, operating far in advance of friendly artillery and in the face of vicious German resistance, elements of the 761st attacked and destroyed multiple defensive positions along the Siegfried Line. The 761st captured seven German towns, more than 400 vehicles, 80 heavy weapons, 200 horses and thousands of small arms. During that three-day period, the battalion inflicted more than 4,000 casualties on the German army. It was later determined that the 761st had fought against elements of 14 German divisions.

The strength of the 761st Tank Battalion was proven during 183 days of continual fighting, including action in the Battle of the Bulge. Staff Sergeant Ruben Rivers posthumously received the Congressional Medal of Honor for his extraordinary heroism in action. Warren G. H. Crecy received a battlefield commission and a recommendation for the Medal of Honor while earning his reputation as the "Baddest Man" in the 761st. Eventually, after delays caused by the deep racial prejudices of the time, the unit was awarded the Presidential Unit Citation by President Jimmy Carter.