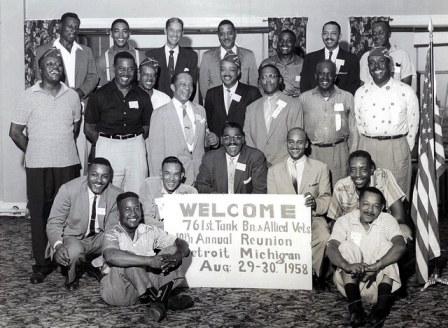 Drafted with several childhood friends, Buddie Branch was inducted into the army on August 9, 1943 in Cincinnati, Ohio.

After taking an aptitude test at Fort Thomas in Covington, Kentucky, Buddie Branch was selected for training at the Armor School at Fort Knox Kentucky. There, he and his fellow recruits received training in the use of pistols, carbines, rifles, and basic operation and maintenance of the M4 Sherman Tank. In November of 1943, Buddie was transferred to Camp Hood, Texas, and assigned to "B" Company of the 761st Tank Battalion.

The 761st was the first group of African American tankers to reach France. Assigned to Patton’s 3rd Army, the 761st saw heavy combat as they moved across France and Germany. Nearly 50 members of the Battalion were decorated for bravery in combat, including Corporal Buddie Branch.

Buddie Branch traveled from New York Harbor to Dorset, England on August 27, 1944. When his battalion landed in England on September 7, 1944, they crossed the English Channel to Omaha Beach. All along the English Channel there were wrecked tanks, jeeps and other army equipment, a sign of just how difficult the war was going for the allies.

Meeting General Patton, the all black 761st Battalion was given a speech and told that he expected nothing but the best from them. Branch and "B" Company were assigned to one of two task forces going into into a town called Morville. With orders to support the infantry, the tank's mission was to kill any enemy troops, and blow up anything that could be used for an observation post The task force was led by Colonel Peter Kopcsak, commander of the 602nd Tank Destroyer Battalion, one of the first four tank destroyer battalions in the U.S. Army. Kopcsak had personally written the book on tank destroyer tactics at Camp Hood.

After Morville, The Battalion moved its command post to Vicsur- Seille, then Obreck. Baker company continued its support of Second Battalion, 104th Infantry, taking Chateau Voue, Lindrequin, then Nebing, with two of its tanks lost to mines. Next came Albestroff, resulting in the loss of three tanks to 88s and mines.

After a small respite for maintenance, the battalion was once again called into action. Branch remembers "We got orders to link up with "C" Company in an attack on a town, Honskirch. We fell in with a column of "C" Company tanks, five Sherman's and two assault guns altogether. We were waiting outside the town for air support when Lt. Long called Brown on the radio and gave orders to move out. We moved into and through the town. That's when the Germans opened fire."

From his gunner's seat, Branch saw the lead tank burst into flames. "The burning tank kept moving off the road and into the field. I saw three guys bail out. Then the tank behind us got hit. This was how the Jerries would hit a column, lead tank first then the last tank in the column. Then came machine gun fire, mortars, shelling, the works. I opened up, sweeping the area where the flashes came from. Ballard's fifty caliber was firing up behind me, dripping spent shell casings down into the turret basket. Then I couldn't move the turret; our tank got hit in the turret ring. Up behind me, Ballard had been hit in the head by shrapnel. He seemed dazed, unable to speak in a state of shock." Branch took over, guiding the driver of his Sherman off the road and behind a barn. The crew bailed out and took cover in a beet cellar, dragging wounded men behind them. Branch left cover, repeatedly braving enemy fire to extract other wounded tankers from the burning column and carrying them to shelter. "When I ran back a few times, Captain Gates had arrived in a halftrack, helping with the wounded and directing fire on the enemy. We went back to the tanks and kept firing until they withdrew. Total losses for the 761st for November were 22 killed in action, 81 wounded, including 2 who later died of wounds.

Corporal Buddie Branch's Citations reads:
For heroic achievement in action against the enemy on 25 November 1944, in Honskirch, France. Corporal Branch, after having established covering fire for seventeen walking casualties, voluntarily dismounted from his tank, and with utter disregard for his personal safety, distinguished himself by courageous bravery in the face of heavy enemy fire. Corporal Branch succeeded in inspecting six disabled tanks, aided in the removal and evacuation of seven litter cases, carrying each one back approximately three hundred yards to shelters, while enemy 88mm guns, mortars, machine guns, and snipers continued to fire upon the disabled tank column for a period of four and one half hours. Corporal Branch’s courage and devotion to duty is an inspiration to all.

Corporal Buddie Branch was one of the rare amount of African Americans who were decorated for bravery in World War II. Beside his honored Bronze Star, Buddy Branch has received numerous awards and recognitions.

His medal of honor citation read:
For extraordinary heroism in action on 5 and 6 April 1945, near Viareggio, Italy. Then Second Lieutenant Baker demonstrated outstanding courage and leadership in destroying enemy installations, personnel, and equipment during his company's attack against a strongly entrenched enemy in mountainous terrain. When his company was stopped by the concentration of fire from several machine gun emplacements, he crawled to one position and destroyed it, killing three Germans. Continuing forward, he attacked and enemy observation post and killed two occupants. With the aid of one of his men, Lieutenant Baker attacked two more machine gun nests, killing or wounding the four enemy soldiers occupying these positions. He then covered the evacuation of the wounded personnel of his company by occupying an exposed position and drawing the enemy's fire. On the following night Lieutenant Baker voluntarily led a battalion advance through enemy mine fields and heavy fire toward the division objective. Second Lieutenant Baker's fighting spirit and daring leadership were an inspiration to his men and exemplify the highest traditions of the Armed Forces.