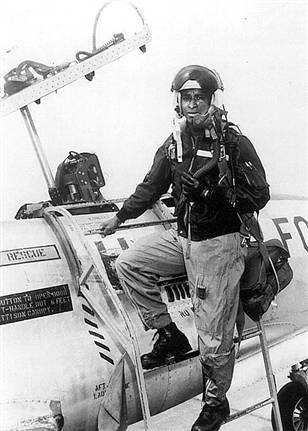 Lawrence was a 31 year old Air Force officer when he was selected in 1967 to join a small team of military officers training for a planned small space station. The Pentagon's "Manned Orbiting Laboratory," or MOL, was intended to explore the value of military space missions for astronauts. Two-man crews would be launched aboard advanced Gemini capsules and spend a month or more in orbit, practicing visual reconnaissance and communications intercepts and other national security tasks.

Robert H. Lawrence, Jr. was born on October 2, 1935, in Chicago, Illinois.  At the age of 16, he was a graduate in the top 10% of Englewood High School, and by the  age of 20, Lawrence was already a graduate of Bradley University with a Bachelor's Degree in Chemistry.  While a student at Bradley University, Robert Lawrence distinguished himself as Cadet Commander of the Bradley Air Force Reserve Officer Training Corps and received the commission of Second Lieutenant in the Air Force Reserve Program.

Major Robert Lawrence Jr., completed his flight training the following year at Malden Air Force Base, and became a pilot for the United States Air Force. Marrying  Barbara Cress, the daughter of Dr. and Mrs. Henry Cress of Chicago, Lawrence went on to completed an Air Force assignment as an instructor pilot in the T-33 training aircraft for members of the German Air Force.

Major Robert Lawrence, Jr. was a senior United States Air Force  pilot, accumulating well over 2,500 flight hours, 2,000 of which were in jets. Lawrence flew many tests in the Lockheed F-104 Starfighter to investigate the gliding flight of various unpowered spacecraft returning to Earth from orbit, such as the North American X-15 rocket-plane. NASA cited Lawrence for accomplishments and flight maneuver data that "contributed greatly to the development of the Space Shuttle."

Major Lawrence, after successfully completed the Air Force Flight Test Pilot Training School, was selected by the USAF as an astronaut in the Air Force's Manned Orbital Laboratory Program, thus becoming the first Black Astronaut candidate in June of 1967.

NASA astronauts had already made ten orbital flights aboard Gemini spacecraft, and had just begun the Apollo program and its race to the moon. But the 1960s space race wasn’t just about peaceful exploration, and both the Soviet Union and the United States were also developing manned space systems for military purposes.

Major Robert Lawrence was killed on December 8, 1967, in the crash of an F-104 Starfighter at Edwards Air Force Base, California.  Practicing what some have comed to call a "training flight" or a "space shuttle landing test," Lawrence was killed instantly in the landing training maneuver. Called a "flare," the  risky high speed maneuver involved pulling the craft’s nose up to generate a short burst of extra lift (slowing the descent) by sacrificing a lot of forward speed (reducing touchdown speed) just prior to touchdown.

Timing was critical, and the aerodynamics were still being mapped out. Too soon, and you began falling again, too fast; too late, and you never slowed enough to survive runway contact.

Lawrence had mastered this piloting task and made a number of test flights in a special two-seat version of the jet. On Dec. 8, 1967, he was the instructor pilot for another officer, Major John Royer, who was learning how to perform such maneuvers himself. Royer made his approach, but flared too late. The airplane struck the ground hard, the main gear failed, and the airplane caught fire. The front seat pilot of the aircraft successfully ejected upon ground impact and survived the accident, but with major injuries. Major Lawrence, whose ejection seat had a slight timing delay to avoid contact with the first seat, did not get out in time. The airplane had rolled onto one side and his ejection seat, with Lawrence still in it, struck the ground, killing him instantly. Major Lawrence's death made him the only member of the MOL team to lose his life in the line of duty on that program.

During his brief career, Major Lawrence earned the Air Force Commendation Medal and the Air Force Outstanding Unit Citation. After many years of relative obscurity, his achievements, dedication, and sacrifices for the nation were finally recognized on December 8, 1997, when his name was inscribed on the Astronaut Space Mirror Memorial at the Kennedy Space Center in Florida.