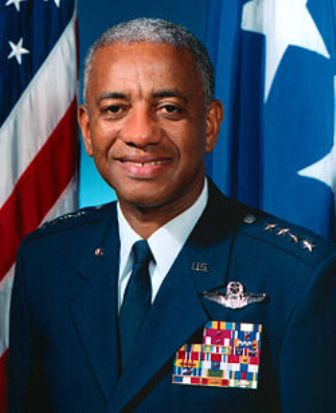 General Lloyd newton flew 269 combat missions in Vietnam and was selected to join the U.S. Air Force Aerial Demonstration Squadron, the Thunderbirds, in November 1974. He was the first African American to become a pilot for the Thunderbirds.He was a command pilot with more than 4,000 flying hours in the T-37, T-38, F-4, F-15, F-16, C-12 and the F-117 stealth fighter.

Four Star General Lloyd "Fig" Newton served as the Director of Operations, United States Special Operations Command and as the Assistant Vice Chief of Staff Headquarters U.S. Air Force. Newton culminated his Air Force career as the Commander, Air Education and Training Command where he was responsible for recruiting, training and education for all Air Force personnel. His command consisted of 13 bases, 43,000 active duty personnel and 14,000 civilians. At 54 Lloyd Newton was the only African Four Star General in the Air Force.

Lloyd Newton was born in Ridgeland, South Carolina, where he graduated from Jasper High School. As a child, Newton often stood in the fields of the family farm in Ridgeland, South Carolina, watching airplanes flying overhead but not thinking about being a pilot, he said.  At that time, military uniforms fascinated him more than airplanes. His interest in flying was also sparked in 1964 when he saw the Air Force Thunderbirds aerial demonstration team perform during his junior year of college.  He said he became consumed with a burning desire to be a Thunderbird.  At the time, the team had never had an African-American pilot.  That didn't deter Lloyd Newton.

He earned a Bachelor of Science degree in aviation education and commissioned a Second Lieutenant from Tennessee State University, Nashville, Tennessee in 1966. In 1985, he received a Master of Arts degree in Public Administration from George Washington University, Washington, D.C.

General Newton retired from service in 2000 after thirty four years of service to the country in the United States Air Force. After his retirement, Lloyd W. “Fig” Newton, became the Vice President for International Programs and Business Development for Pratt & Whitney Military Engines in East Hartford, Connecticut. As Vice President, he is responsible for international military sales, assessing U.S. military requirements and developing business for Pratt’s military engine services. He leads a team of 45 personnel who manages a host of domestic and international customers with a sales target of nearly $1 Billion.

In 2008 Newton endorsed Barack Obama for President and appeared on stage at the Democratic National Convention at Invesco Field with other former military leaders to lend support to Obama's campaign.