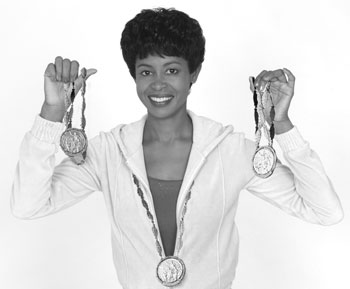 On September 7, 1960, Wilma Rudolph made Olympic history by becoming the first woman, not to mention the first African-American woman, to win three gold medals. Taking first place in both the 100-meter and 200-meter dash and in the 4x100 relay, Wilma Rudolph opened the door for women to compete in previously all-male track and field events. Graceful, fast and slender, the Italian press called Wilma Rudolph La Gazzella, the gazelle.

Wilma Glodean Rudolph was born into a poor southern family on June 23, 1940 in Clarksville, Tennessee. Weighing just 4 1/2 pounds, she was the twentieth of twenty-two of her father's children. A sickly child, Wilma's mother Blanche spent countless hours nursing her, but when she developed infantile paralysis, caused by the polio virus the doctors held out little hope she would ever walk without braces, let alone compete in the Olympics. After losing the use of her left leg, she was fitted with metal leg braces when she was six. "I spent most of my time trying to figure out how to get them off," she said. "But when you come from a large, wonderful family, there's always a way to achieve your goals."

Wilma’s family worked diligently on the physical therapy, taught to them by the Fisk University hospital. Their hard work paid off and by the age of eight Wilma was not only walking without braces, she was running and playing like an average child. Wilma Rudolph was anything but average though.

While she was attending Burt High School, Wilma Rudolph became a basketball star, setting state records for scoring and leading her team to the state championship. She also began to run track. Tennessee State University  put six young women on the 1956 Olympic team going to Australia. Of these six, Wilma Rudolph was one of the high school individuals in Tennessee State University Summer programs.  By the time she was 16, the 5-foot-11 and 130 pound sprinter earned a berth on the U.S. Olympic track and field team and came home from the 1956 Melbourne Games with an Olympic bronze medal in the 4 x 100 meter relay.

After high school, Wilma Rudolph went on to attend Tennessee State fulltime, where she graduated with a B.A. in education in 1963. The playing field for women's sports was still struggling and lagged behind the opportunities given to male athletes. At the time Tennessee State did not give track scholarships to women, so Wilma, like many others were given work aid. Work aid allowed them to work a couple of hours a day in some kind of clerical job. With renowned coach Ed Temple and some of the fastest runners in the country as her teammates, Wilma Rudolph's talents were fostered and her sprinting skills grew. In 1959 the team participated in the Pan American Games in Chicago, Illinois.  Tennessee State athlete Lucendia Williams won both the 100 and 200 meter races, while Wilma Rudolph got third in both sprints and ran on the 4 x 100 relay team.

Ed Temple, Wilma Rudolph's Tennessee State coach was chosen as the 1960 United States Olympic coach and had a total of eight women from his University on the Olympic team, including Wilma. At the 1960 Rome Olympics, Wilma Rudolph became "the fastest woman in the world" and the first American woman to win three gold medals in one Olympics.  Easily winning the 100 meter race by three yards in just 11 seconds., strong tail winds that day were above Olympic standards so Rudolph didn't receive credit for breaking the World record time. But Wilma Rudolph wasn't done shining. Setting an Olympic record in the opening heat, she went on the take the gold in the 200 meter race. The 4x100 relay race would end with the same results. The all Tennessee State women's team beat out Germany, taking the gold in front of Germany, in just 44.5 seconds.

Wilma Rudolph had faced numerous racial roadblocks growing up in the segregated South. Traveling to tracks meets throughout the Jim Crow South was always difficult and her team was forced to stay in different housing than the white teams. Not only competing for her race, Wilma Rudolph had to break barriers set up by male dominated athletes. When her hometown of Clarksville wanted to have a parade in her honor, Rudolph insisted that the celebration be open to whites and blacks, not just one or the other as was customary; the parade and dinner following were the first integrated events in Clarksville.

Wilma Rudolph retired from competition in 1963 at the age of twenty two. After her athletic career, Rudolph worked as a teacher at Cobb Elementary School, coaching track at Burt High School, and became a sports commentator on national television. She married her high school sweetheart Robert Eldridge in 1963. Although the marriage didn't last, the couplehad three beautiful children before divorcing.

Both women and African Americans felt the glass ceiling crack when Wilma Rudolph competed and won in the 1960 Olympics. A testament to her hard work and dedication, along with her family's love and faith, Wilma Rudolph could not be stopped by polio, racism or sexism and is a role model for generations to come.