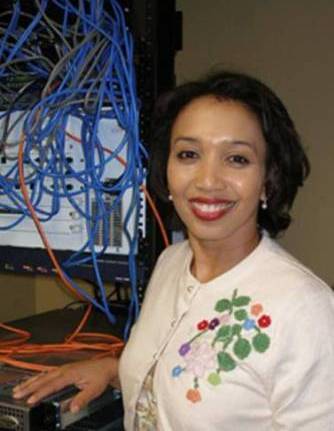 Janet Emerson Bashen is the first African American female to hold a patent for a software invention. Her software, LinkLine, is a web-based application for EEO claims intake and tracking, claims management, document management and numerous reports. Janet Emerson. Bashen was issued U.S. patent #6,985,922 on January 10 2006, for a “Method, Apparatus and System for Processing Compliance Actions over a Wide Area Network.”

“My success and failures make me who I am and who I am is a black woman raised in the south by working class parents who tried to give me a better life by fostering a fervent commitment to succeed.” – Janet Emerson Bashen.

Janet Emerson Bashen, formerly Janet Emerson, attended Alabama A&M until she married and relocated to Houston, Texas, where she now resides. Bashen’s educational background includes a degree in legal studies and government from The University of Houston, and postgraduate studies at Rice University’s Jesse H Jones Graduate School of Administration. Bashen is also a graduate of Harvard University’s “Women and Power: Leadership in a New World.” Bashen will soon be pursuing her LLM from Northwestern California University School of Law.

Janet Emerson Bashen is the founder, President and CEO of Bashen Corporation, a leading human resources consulting firm that pioneered end-to-end EEO compliance administration services. Established in September 1994, Bashen built the business from her home office, which was little more than her kitchen table with no money, one client and a fervent commitment to succeed.

Janet Emerson Bashen and Bashen Corporation are continually recognized nationally for their business achievements. In May, 2000, Bashen testified before Congress regarding the effect of the FTC opinion letter on third party discrimination investigations. Bashen, along with Texas Representative Sheila Jackson Lee, were key figures in the change in legislation.

Janet Emerson Bashen maintains a very strong community commitment and is on the Board of Directors for the North Harris Montgomery County Community College District Foundation, and chairs the Corporate Advisory Board of the National Association of Negro Business and Professional Women’s Clubs, Inc., She  is also a Board member of the Prep Program, a non-profit organization dedicated to preparing at-risk student athletes for college.

In October 2002, Bashen Corporation was named one of America’s entrepreneurial growth leaders by Inc Magazine in its annual Inc 500 ranking of the nation’s fastest-growing private companies, with an increase in sales of 552%. In October 2003, Bashen was given the Pinnacle Award by the Houston Citizens Chamber of Commerce. Bashen is also the recipient of the prestigious Crystal Award, presented by the National Association of Negro Business and Professional Women’s Clubs, Inc., for achievement in business.