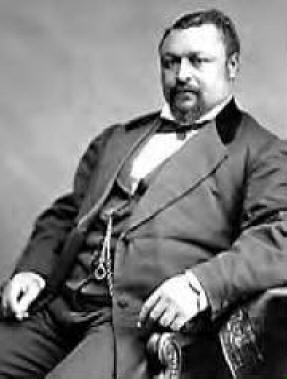 A slave who became a successful plantation owner, Blanche Kelso Bruce was the second African American to serve in the United States Senate and the first to be elected to a full term.

Blanche Bruce was born near Farmville, Virginia, on March 1, 1841. His mother, Polly Bruce, was a slave, and his father, Pettus Perkinson, was his mother’s owner and the son-in-law of her deceased former owner, Lemuel Bruce. Bruce’s first name was originally “Branch,” but he changed it to “Blanche” as a teenager. For unexplained reasons, he later adopted the middle name “Kelso.” One of 11 children, Blanche Bruce was a personal servant to his half brother William Perkinson. Even though he was a slave, Bruce was accorded a status nearly equal to the Perkinson children’s. Described by contemporaries as an eager learner, he studied with William’s private tutor.

Bruce escaped slavery at the opening of the Civil War and attempted to enlist in the Union Army. After the military refused his application, he taught school, briefly attended Oberlin College, and worked as a steamboat porter on the Mississippi River.

In 1864 Blanche Bruce settled in Hannibal, Missouri, and organized the state's first school for blacks. Five years later he moved to Mississippi where he entered local politics and established himself as a prosperous landowner. In quick succession he was appointed registrar of voters in Tallahatchie County, tax assessor of Bolivar County, elected sheriff and tax collector of Bolivar where he also served as supervisor of education. On a trip to the state capital of Jackson in 1870, Bruce gained the attention of powerful white Republicans who dominated Mississippi's Reconstruction government.

In February 1874, Bruce was elected by the state legislature to the Senate as a Republican. In the Senate, Blanche Bruce was a member of the committees on Pensions, Manufactures, and Education and Labor. He chaired the Committee on River Improvements and the Select Committee to Investigate the Freedman's Savings and Trust Company. He supported desegregation of the army, protection of African American voting rights, and more humane treatment of Native Americans. Bruce encouraged increasing the disposition of western land grants to African Americans. On February 14, 1879, Bruce presided over the U.S. Senate becoming the first African-American (and the only former slave) to do so.

Blanche Bruce’s privileged background often alienated him from his poorer constituents. He and his wife, Josephine Beall Wilson of Ohio,the first black teacher in the Cleveland public schools and the daughter of a prominent mulatto dentist, whom he married on June 24, 1878, became fixtures in Washington, DC, high society.

Blanche Bruce worked devotedly to gain rights for African Americans. After leaving the Senate, he was appointed registrar of the U.S. Treasury by President James Garfield. At the Republican convention of 1888, Bruce received 11 votes for vice president. He was appointed recorder of deeds for the District of Columbia and later was a member of the board of trustees of Howard University.

In 1889, President Benjamin Harrison appointed Blanche Bruce recorder of deeds for the District of Columbia; however, he left that office in 1893 after receiving an honorary LL.D. and joining the board of trustees at Howard University. Bruce returned to the Treasury post in 1897 after being considered for a Cabinet position in President William McKinley’s administration. He continued to reside in Washington until he succumbed to a kidney ailment due to complications from diabetes on March 17, 1898.