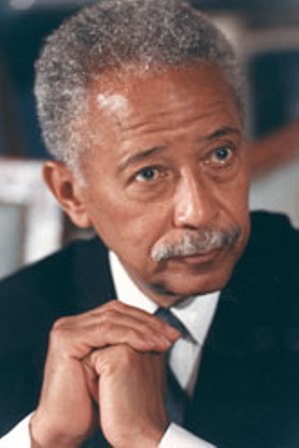 David N. Dinkins, the 106th mayor of New York City, is a noted advocate for children, education, and compassionate urban policy and tolerance. Over the years, Dinkins established a legacy of working to empower poor people and minorities.

David Norman Dinkins was born on July 10, 1927, in Trenton, New Jersey. He was raised in Trenton until the Depression, when his family moved to Harlem. He was raised by his mother and grandmother, his parents having divorced when he was seven years old. He returned to Trenton and attended Trenton Central High School, where he graduated in 1945 in the top 10 percent of his class.

Elected to the New York State Assembly in 1966, David Dinkins helped create the Search for Education, Elevation and Knowledge (SEEK) program, which provides grants and educational assistance to low-income students. He established guidelines that encouraged wider voter registration as president of the New York City Board of Elections, a post he held from 1975 until he became the president of the borough of Manhattan in 1985.

Dinkins' inauguration speech was punctuated with references to oppression, human rights, and the need for equality. He vowed to be "mayor of all the people of New York," and declared: "We are all foot soldiers on the march to freedom." Dinkins helped fulfill his prediction that the "bells of freedom will ring in South Africa" by being a national voice in favor of anti-apartheid sanctions. He fought to have the city divest itself of $500 million worth of pension fund stock invested in companies that do business in South Africa and secured passage of a bill that allowed the city to rate banks on their opposition to apartheid.

Among his other accomplishments were creating the office of Special Commissioner of Investigations for schools, creating a system of after hour youth centers called Beacon Schools, and working to create an all civilian police complaint review board.

Known for his reserved public demeanor, Dinkins was sharply criticized for his handling of racial strife in Crown Heights, a boycott of Korean Grocers in Brooklyn and civil unrest in Washington Heights. Dinkins faced a $1.8 billion budget deficit when he entered office which grew to $2.2 billion by the time he left office. The economy remained sluggish throughout his term, preventing the enactment of much of his agenda. He ran for reelection in 1993, but was defeated by Rudolph W. Giuliani. Dinkins still remains active in New York City politics, hosts a weekly radio show, and teaches public affairs at Columbia University.

David Dinkins served on the boards of a number of not-for-profit and charitable organizations, many of which assist children and young people, such as the Children's Health Fund and Hope for Infants. Dinkins is the national chairman of the National Black Leadership Commission on AIDS, and chairman emeritus of the board of the Constituency for Africa.