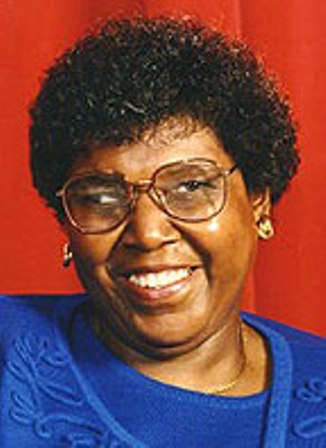 Barbara Charline Jordan was born February 21, 1936, the daughter of Benjamin and Arlyne Jordan. The youngest daughter of a Baptist minister, she lived with her two sisters in the Lyons Avenue area of Houston's Fifth Ward. The church played an important role in her life. Barbara Jordan joined Good Hope on August 15, 1953, under the leadership of Reverend A.A. Lucas. Graduating with honors from Houston's Phillis Wheatley High School in the Houston Independent School District,  Jordan went on to Texas Southern University where she majored in government and history.

Barbara Jordan campaigned for the Texas House of Representatives in 1962 and 1964. Her persistence won her a seat in the Texas Senate in 1966, becoming the first African American state senator since 1883 and the first black woman to serve in that body. Re-elected to a full term in the Texas Senate in 1968, she served until 1972. She was the first African-American female to serve as president pro tempore of the state senate and served one day, June 10, 1972, as acting governor of Texas.

In 1972, Barbara Jordan was elected to the United States House of Representatives, becoming the first black woman from a Southern state to serve in the House. She was also the first woman to represent Texas in the House in her own right, the first, Lera Thomas, had been elected as a stand-in for her husband, Albert. She received extensive support from former President Lyndon Johnson, who helped her secure a position on the House Judiciary Committee.

Barbara Jordan captured the attention of the nation during the 1974 Nixon impeachment hearings. As a member of the House Judiciary Hearings she served on the committee charged with hearing and evaluating the evidence bearing on the possible impeachment of then President Nixon. It was on this committee that her incisive questioning and her impassioned defense of the Constitution made her a respected national figure.

In l976, Barbara Jordan became the first woman and first African-American to give the keynote speech at the Democratic National Convention. Her speech in New York that summer was ranked 5th in "Top 100 American Speeches of the 20th century" list and was considered by many historians to have been the best convention keynote speech in modern history.

In 1978 she announced that she would not seek re-election and returned to Texas as a full professor at the Lyndon B. Johnson School of Public Affairs at the University of Texas. She remained there, and became a counselor to Texas Governor Ann Richards.

Barbara Jordan was an inspirational figure in the Progressive movement through her powerful public speaking and her triumphant refusal to be defined by disability. She received the Presidential Medal of Freedom, among numerous other honors. On her death she became the first African-American Woman to be interred in the Texas State Cemetery. The main terminal of Austin-Bergstrom Airport is named for her.