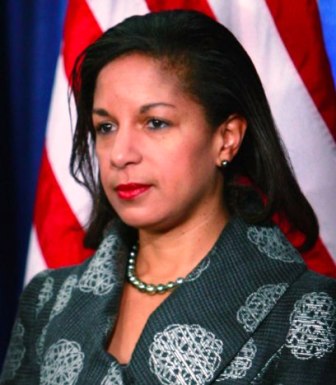 Born Susan Elizabeth Rice in Washington, D.C., on November 17, 1964, to parents Lois Dickson Fitt and Emmett J. Rice. Rice's family is well renowned among the Washington elite. Her father was a governor of the Federal Reserve and her mother is an education policy scholar. Rice was a three-sport athlete, student council president, and valedictorian at National Cathedral School in Washington, D.C., a private day girls' school. She played point guard in basketball and directed the offense, acquiring the nickname "Spo," short for "Sportin'."

Her parents always told her to "never use race as an excuse or advantage." As a young girl Susan Rice says she "dreamed of becoming the first U.S. Senator from the District of Columbia." She also held "lingering fears" that her accomplishments would be diminished by people who attributed them to affirmative action.

Rice was a foreign policy aide to Michael Dukakis during the 1988 presidential election. She also worked as a management consultant at McKinsey & Company, a global management consulting firm, in the early 1990s, where she was affiliated with the firm's Toronto office.

On September 12, 1992, Susan Rice married her Stanford romantic interest, Ian Cameron, who was working as a television producer in Toronto for the Canadian Broadcasting Corporation. The couple lived in Canada until 1993, when Rice began working in Washington D.C.

Susan Rice served eight years at the White House and the State Department during the Clinton administration, holding such positions as Director for International Organizations and Peacekeeping.

She quickly advanced ahead of her peers and veteran officials when her friend and mentor, Madeline Albright, recommended Rice for the post of assistant secretary for African affairs in 1997. With her appointment, she became one of the youngest assistant secretaries of state ever. She was the top diplomat for African issues during the 1998 terrorist bombings of embassies in Tanzania and Kenya.

Susan Rice's involvement and rise into politics mirrored that of Condoleezza Rice, the secretary of state under President George W. Bush. The two are both female, African-American, foreign policy experts who have ties to Stanford University. However, the two are not related. The mix-up has happened so often that Democrats have a saying about the confusion: "They've got their Rice, and we've got ours."

In 2001, Susan Rice went to work for the Brookings Institution, one of the oldest think tanks in America.  Her work as a Senior Fellow at Brookings encompasses a wide range of issues related to U.S. foreign and national security policy.

Susan Rice took leave from Brookings in 2008, to become the senior foreign policy advisor to Barack Obama during his presidential campaign. After Obama's successful election in November of 2008, Rice was nominated to be the U.N. Ambassador for the United States. On January 22, 2009, she was confirmed by the U.S. Senate. Rice served as the 24th United States National Security Advisor from 2013 to 2017