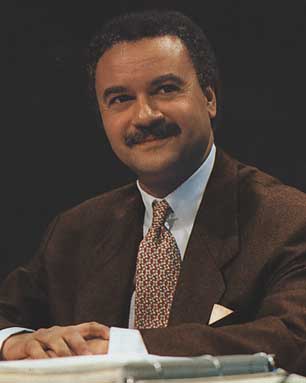 Ron Brown made history in 1989 when he became the first African American chosen to lead a major U.S. political party. From 1989 through 1992, Brown served as the highly visible deputy chairman of the Democratic National Committee (DNC). Prior to that, he was Jesse Jackson's manager at the 1988 Democratic National Convention. In 1993 Ron Brown was chosen as President Bill Clinton's secretary of Commerce.

Ronald Harmon Brown was born in Washington, D.C., April 1, 1941 and was raised in Harlem, New York, in a middle-class family. Brown attended Hunter College Elementary School and Rhodes Preparatory School. His father managed the Theresa Hotel in Harlem, where Ron lived growing up.

Ron Brown attended Middlebury College in Middlebury, Vermont. While there he became the first African-American member of Sigma Phi Epsilon, a national men's collegiate fraternity. Graduating in 1962 Ron Brown married Alma Arrington, and later that same year he joined the army. He served in both South Korea and Europe, and after being discharged in 1967, he joined the National Urban League, a leading economic equality group in the United States. Meanwhile, Brown enrolled in law school at St. John's University and obtained a degree in 1970.

In 1981 Ron Brown joined Patton, Boggs & Blow, becoming the first African-American partner at this prestigious firm in the nation’s capital. He proved himself a skillful negotiator and was highly sought after as a lobbyist. Ron Brown continued to be active in politics, serving as the Reverend Jesse Jackson’s convention manager in his 1988 bid for the presidency.

Ron Brown was the consummate Washington insider who learned how to work the levers of power by being a team player. Before becoming party chairman, he served on the DNC's Executive Committee as deputy chairman and chief counsel for the party and worked for Ted Kennedy and other Democrats in Congress. "His political formation is within national political processes and not within ethnic political processes," Harvard professor Martin Kilson told the Washington Post. "Brown is the new black transethnic politician." Soon after his election to the DNC in 1989, Brown made a vow to the committee, stating, as reprinted in the Washington Post, "I promise you, my chairmanship will not be about race, it will be about the races we win."

Ron Brown played an integral role in running a successful 1992 Democratic National Convention and in Bill Clinton's successful 1992 presidential run. President Clinton then appointed Brown to the position of Secretary of Commerce in 1993.

Secretary Ronald H. Brown's appointment was confirmed by the U.S. Senate on January 21, 1993 and he took office the following day, the first African American to ever hold the position. "American business will know that the Department of Commerce has a strong and independent leader and a forceful advocate" stated President-elect Bill Clinton on December 12, 1992.

Bringing his trademark activist style to the Department of Commerce, Ron Brown was a tireless advocate for American business both at home and overseas. The Secretary circled the globe, spreading good will with his characteristic enthusiasm and cultivating opportunities and markets for American products.

On April 3, 1996, while on a trade mission, the Air Force 737 carrying Brown and 34 other people crashed in Croatia, killing everyone onboard. Speculations as to the circumstances surrounding the plane crash that caused Brown's death include many government cover-up and conspiracy theories.