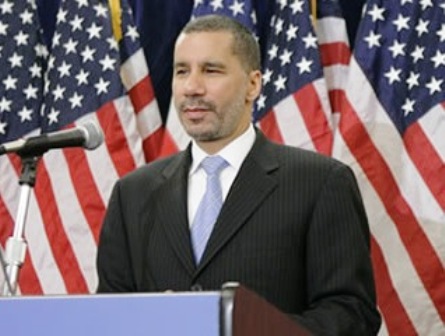 Born David Alexander Paterson on May 20th, 1954, in Brooklyn, New York, to labor law attorney Basil Paterson and homemaker, Portia Paterson. His family is steeped in political history, Basil was the first African-American Secretary of State in New York and the first African-American Vice-Chair of the National Democratic Party. His paternal grandmother also worked for a brief time in the political arena as a secretary to civil rights activist, Marcus Garvey.

The first of two sons, David was legally blind from birth, with only partial sight in his right eye. When their son was denied the opportunity to attend classes with sighted students in his hometown, Paterson's family moved to Hempstead, N.Y., so that he could participate in a mainstream classroom. An excellent student, Paterson graduated from high school in three years.

David Paterson received a BA in history from Columbia University in 1977 and a law degree from Hofstra Law School in 1983. After law school, he went to work for the Queens District Attorney's Office, but did not pass the New York bar examination, and did not become an Attorney at law. He attributed his failing the New York bar to insufficient accommodation for his visual impairment, and has since advocated for changes in bar exam procedures.

In 1985, David Paterson was elected to the New York State Senate, representing the 30th State Senate District, which encompasses Harlem, East Harlem, and the Upper West Side neighborhoods of Manhattan. It is the same district his father had represented. David Paterson has set milestones in history throughout his career. At the age of 31, David Paterson became the youngest state senator in New York's history. In 2002, David Paterson was elected Democratic leader of the New York State Senate, the first nonwhite legislative leader in New York's history. When asked by the New York Amsterdam News about life lessons he had learned, Paterson replied, "You never get to any level of leadership where your race is not a factor." He continued, "You don't want to be the first; you want to be the first of many."

Paterson gained national attention in the 1990s because of his efforts to preserve an African-American burial ground that was discovered at the excavation site for construction of a new federal building in New York City . He worked to secure federal funding for the project and said in 1997 that "through the discovery of the African-American Burial Grounds, our history has at last come to the surface for all of us to know and respect."

David Paterson was selected by New York Attorney General Eliot Spitzer as his running mate for the Governor's office in 2006. The news stunned the New York political world, as the Democratic minority was poised to possibly take over the state legislature. Paterson would trade a possible powerful Senate Majority Leader position for the largely ceremonial Lieutenant Governor post.

The Spitzer-Paterson ticket won a landslide victory in the election, with 69% of the vote. It was the largest margin of victory in a gubernatorial race in New York history, and the second-largest for any statewide race in New York history. In late December 2006, shortly before being sworn in as lieutenant governor, Paterson said that if he ever succeeded Spitzer as governor, he and Nelson A. Rockefeller would have something besides the governorship in common: great difficulty in reading. Rockefeller was dyslexic, which Paterson compared to his blindness. During his time as Lieutenant Governor, Paterson also served as an adjunct professor at Columbia University's School for International and Public Affairs.

David Paterson now serves as a part of of the Democratic National Committee and as a house part of of the Democratic Legislative Campaign Committee. In further to his domestic work, the administrator is an outspoken disciple for the American Foundation for the Blind, and an zealous runner. Paterson finished the New York City Marathon upon Nov 7th, 1999, and now serves as a Member of the Board of the Achilles Track Club.