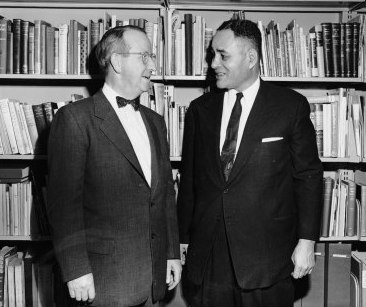 Ralph Bunche was a United States Diplomat, a key member of the United Nations for more than two decades, and winner of the 1950 Nobel Prize for Peace for his successful negotiation of an Arab-Israeli truce in Palestine the previous year.

Ralph Johnson Bunche was born in Detroit August 7, 1903. His father, Fred Bunche, was a barber in a shop having a clientele of whites only; his mother, Olive (Johnson) Bunche, was an amateur musician. When he was a child, the family moved to Toledo, Ohio then in 1915, Albuquerque, New Mexico in an effort to improve his parents' health. His mother died in 1916 and his father three months later. Bunche and his sister, Grace, went to live in Los Angeles with their maternal grandmother, Lucy Taylor Johnson. Ralph Bunche worked to help the family's hard pressed finances by selling newspapers, serving as house boy for a movie actor, working for a carpet-laying firm, and doing what odd jobs he could find.

With another scholarship in hand, he moved on to Harvard, where he began his graduate studies in political science. He completed his master's degree in 1928 and for the next six years alternated between teaching at Howard University and working toward the doctorate at Harvard. Ralph Bunche was the first African American to gain a PhD in political science from an American university. From 1936 to 1938, Ralph Bunche conducted postdoctoral research in anthropology at London School of Economics, and later at the University of Cape Town in South Africa.

In 1936, Bunche authored a pamphlet entitled A World View of Race. In it, Bunche wrote: "And so class will some day supplant race in world affairs. Race war will then be merely a side-show to the gigantic class war which will be waged in the big tent we call the world." From 1936 to 1940, Bunche served as contributing editor of the journal Science and Society: A Marxian Quarterly.

During World War II Ralph Bunche served in the U.S. War Department, the Office of Strategic Services, and the State Department. He was active in the preliminary planning for the United Nations at the San Francisco Conference of 1945, and in 1947 he joined the permanent UN Secretariat in New York as director of the new Trusteeship Department.

Ralph Bunche was asked by Secretary General Trygve Lie to aid a UN special committee appointed to negotiate a settlement between warring Palestinian Arabs and Jews,  In 1948, he traveled to the Middle East as the chief aide to Sweden's Count Folke Bernadotte, who had been appointed by the UN to mediate the conflict. These men chose the island of Rhodes for their base and working headquarters. In September 1948, Bernadotte was assassinated in Jerusalem by members of the underground Jewish group Lehi.

Following the assassination, Dr. Bunche became the UN's chief mediator. The representative for Israel was Moshe Dayan who reported in memoirs that much of his delicate negotiation with Ralph Bunche was conducted over a billiard table while the two were shooting pool. Optimistically, Dr. Bunche commissioned a local potter to create unique memorial plates bearing the name of each negotiator. When the agreement was signed, Dr. Bunche awarded these gifts. After unwrapping his, Moshe Dayan asked Ralph Bunche what might have happened if no agreement had been reached. "I'd have broken the plates over your damn heads", Bunche answered.

For achieving the 1949 Armistice Agreements, Dr. Bunche received the Nobel Peace Prize in 1950. Bunche returned home to a hero's welcome. New York gave him a ticker tape parade up Broadway, and Los Angeles declared a "Ralph Bunche Day ". He was besieged with requests to lecture, was awarded the Spingarn Prize by the NAACP in 1949, and was awarded over thirty honorary degrees in the next three years.

Ralph Bunche continued to work for the United Nations, mediating in other strife-torn regions, including the Congo, Yemen, Kashmir, and Cyprus. He rose to the position of undersecretary-general in 1968.

Despite having won the Nobel Prize, Bunche continued to struggle against racism across the United States and in his own neighborhood. In 1959, he and his son, Ralph, Jr., were denied membership in the West Side Tennis Club in the Forest Hills neighborhood of Queens. After a great deal of publicity, the club offered an apology and invitation of membership and the official who initially rebuffed the Bunches resigned. Bunche refused the offer saying it was not based on racial equality and was only an exception based on his personal prestige.

Ralph Bunche was an active and vocal supporter of the civil rights movement, and participated in the 1963 March on Washington, where Martin Luther King gave his "I Have a Dream" speech, and also in the famous Selma to Montgomery, Alabama march that led to the passage of the landmark Voting Rights Act of 1965.

Ralph Bunche was passionate in his belief that conflicts could be resolved through negotiation, without resorting to the use of force. He dedicated more than twenty years of his life to achieving the goal of international peace. Dr. Bunche worked tirelessly to resolve seemingly intractable conflicts in such varied places as Palestine, Yemen, Kashmir, Cyprus, Suez, the Congo, and Bahrain. In many cases, his negotiations prevented the outbreak of hostilities and as such did not make headlines.