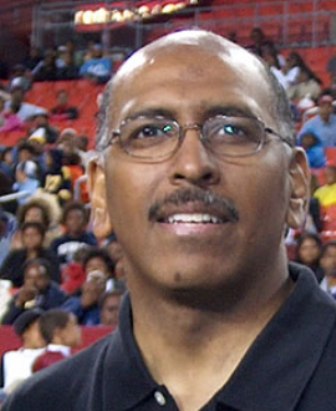 Michael Steele became the first African American chairman of the Republican National Committee in January 2009. From 2003 to 2007, he was the Lieutenant Governor of Maryland, the first African American elected to statewide office in Maryland. During his time as Lieutenant Governor, he chaired the Minority Business Enterprise taskforce, actively promoting an expansion of affirmative action in the corporate world.

Michael Stephen Steele was born on October 19, 1958 at Andrews Air Force Base in Maryland and was adopted as an infant by William and Maebell Steele. Following William's death in 1962, Maebell, worked for minimum wage as a laundress to raise her children, ignoring her friends' appeals to apply for public assistance. She would later tell Michael 'I didn't want the government raising my children'. She later married John Turner, a truck driver. Michael and his sister, Monica Turner, were raised in the Petworth neighborhood of Northwest Washington, D.C. which Steele has described as a small, stable and racially integrated community that insulated him from some of the problems elsewhere in the city. Steele's sister later married and divorced former heavyweight boxing champion Mike Tyson.

Michael Steele attended Archbishop Carroll Roman Catholic High School in Washington, D.C., participating in the Glee Club, the National Honor Society and many of the school's drama productions. During his senior year, he was elected student council president. In 1977, Steele enrolled at Johns Hopkins University in Baltimore where he received a bachelor's degree in international studies.

Michael Steele spent three years as a seminarian in the Order of St. Augustine in preparation for the priesthood, but, ultimately, chose a career in law instead. He earned his law degree from Georgetown University Law Center in 1991. A corporate finance attorney, Mr. Steele founded his own company, The Steele Group, a business and legal consulting firm. His writings on law, business and politics have appeared in The Wall Street Journal, The Washington Times, Politico.com, Townhall.com, and The Journal of International Security Affairs, among others.

Even though the state of Maryland was traditionally a Democrat stronghold, the 2002 general elections went in favor of the Republicans. Michael Steele became lieutenant governor in January, 2003. A self-described Lincoln Republican. Michael S. Steele earned a place in history in 2003 when he became the first African-American elected to statewide office in Maryland.

Steele's popularity grew steadily over the years. Named a 2005 Aspen Institute-Rodel Fellow in Public Leadership and awarded the 2005 Bethune-DuBois Institute Award for his ongoing work in the development of quality education in Maryland, Steele has served on a variety of boards and commissions, including the Export-ImportBank Advisory Board, the U.S. Naval Academy Board of Visitors, and the Republican National Committee. In February, 2007, Michael Steele took up the seat of chairman of GOPAC, a Republican training organization, that helps and funds national and state campaigns.

Michael S. Steele was elected Chairman of the Republican National Committee on January 30, 2009. He was later replaced by Reince Priebus. Known for his humble nature, Michael Steele remains rooted to the political scene. True to his Christian faith, he leads a spiritual life, taking part in the activities at St arys Catholic Church and attending Sunday services with his wife and children.