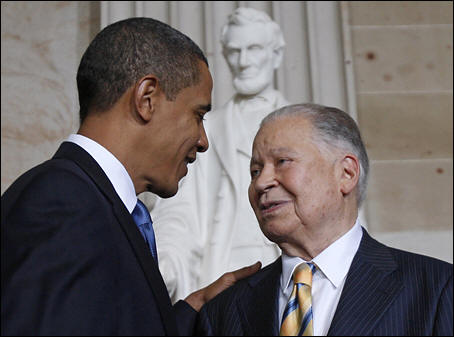 Edward Brooke was the first African American to be elected by popular vote to the United States Senate when he was elected as a Republican from Massachusetts in 1966. He was also the first African American elected to the Senate since the 19th century, and would remain the only person of African heritage sent to the Senate in the 20th century until Democrat Carol Moseley Braun in 1993, and was the last Republican Senator elected from Massachusetts until the 2010 election of Scott Brown.

Edward Brooke, III was born in Washington, D.C., on October 26, 1919. His father, Edward Brooke, Jr., was an attorney for the Veterans Administration for more than fifty years, and his mother, Helen, later worked on all of Brooke's political campaigns.

Brooke attended Dunbar High School. Upon his graduation from Howard University in 1941, he spent five years as an officer in the Army, and saw combat in Italy during World War II as a member of the segregated 366th Infantry Regiment, winning a Bronze Star. In Italy he met and later married Remigia Ferrari-Scacco, with whom he had two daughters, Remi and Edwina. Following Brooke's discharge, he graduated from Boston University Law School in 1948.

He was the chairman of Finance Commission of Boston from 1961 to 1962. Edward Brooke was elected Attorney General of Massachusetts in 1962 and re-elected in 1964. In so doing, he became the first elected African-American Attorney General of any state in American history. In this position, Brooke gained a reputation as a vigorous prosecutor of organized crime, and coordinated with local police departments on the Boston strangler case, although the press mocked him for permitting an alleged psychic to participate in the investigation. Brooke was portrayed in the 1968 film dramatizing the case by William Marshall.

In 1966 Brooke defeated former Governor Endicott Peabody to become a United States Senator representing the state of Massachusetts. During his first term in the Senate, Brooke spent a great deal of time on the issue of the Vietnam War, traveling to Asia on fact-finding missions. Upon his return, he requested that the United States cease using napalm. He also began calling for an end to trade with South Africa because of its apartheid policies.

In 1967, President Lyndon B. Johnson appointed Edward Brooke to the National Commission on Civil Disorders, which made recommendations that ultimately took shape as the 1968 Civil Rights Act. Brooke later challenged Richard Nixon's Supreme Court nominees Hainsworth and Carswell, even though he had supported Nixon's bid for the presidency. Brooke later became the first senator to call for Nixon's resignation. Leaving Congress in 1979, Brooke spent another six years in private practice before retiring.

After leaving the Senate, Brooke practiced law in Washington, D.C., and served as chairman of the board of the National Low Income Housing Coalition. In 1996, he became the first chairman of the World Policy Council, a think tank of Alpha Phi Alpha whose purpose is to expand the fraternity's involvement in politics, and social and current policy to encompass international concerns. Brooke currently serves as the council's chairman emeritus and was honorary chairman at the Centennial Convention of Alpha Phi Alpha held in Washington, D.C., in 2006.

President Obama honored Edward Brooke with the Congressional Gold Medal. Brooke, the first African American to be elected to the Senate by popular vote, was praised by President Obama as a political pioneer who broke racial barriers and bridged divides to move "the arc of history. Speaking in the Capitol Rotunda at a ceremony where Brooke, 90, was awarded the Congressional Gold Medal, the body's highest honor, Obama said that Brooke ignored the "naysayers" and rejected conventional wisdom to carve out a history-making political career.

Edward Brooke has received thirty-four honorary degrees from the nation's most prestigious colleges and universities and numerous other awards, including the Spingarn Medal from the NAACP and the Grand Cross of the Order of Merit from the Italian Government. In 2000, the Commonwealth of Massachusetts dedicated a courthouse in his honor. He passed away on January 3, 2015.