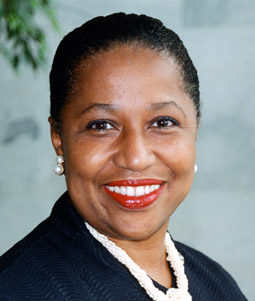 Carol Elizabeth Moseley was born in Chicago to Edna and Joseph Moseley, a Chicago police officer, on August 16, 1947. The family lived in a segregated middle class neighborhood in the South Side of Chicago. Her parents divorced when she was in her teens, and she lived with her grandmother. A self-motivated individual even as a youth, Moseley Braun worked in the post office and in grocery stores to finance her own education after high school.

As an attorney, Moseley Braun was a prosecutor in the United States Attorney's office in Chicago from 1973 to 1977. An Assistant United States Attorney, she worked primarily in the civil and appellate law areas. Her work in housing, health policy, and environmental law won her the Attorney General's Special Achievement Award

Carol Moseley Braun held her first political post as a Democratic representative to Illinois House of Representatives, beginning in 1978. As a representative, she was known as an advocate for social change, working for reforms in education, government, and healthcare. In 1988, she took another challenge. She was elected recorder of deeds for Cook County, Illinois and oversaw hundreds of employees and the public agency’s multimillion budget.

As Senator, Carol Braun became the first woman in history to receive an appointment to the powerful Finance committee, where she introduced the first legislation to federally fund the reconstruction and repair of our nations crumbling schools.  Senator Braun amassed an impressive legislative record, winning approval of the first federal support to preserve and restore the Underground Railroad nationwide, environmental justice and Brownfields’ remediation legislation, women’s pension equity and lupus research funding.  The farm bureau named her their “Ethanol Queen” for her work on that alternative fuel.

President Bill Clinton appointed Carol Moseley Braun ambassador to New Zealand in 1999. In 2003, she campaigned for the Democratic presidential nomination. Moseley Braun opposed the war in Iraq and spoke out about the country’s economic situation, but she dropped out of the race in early 2004 after failing to garner enough support. She asked her supporters to vote for Howard Dean.