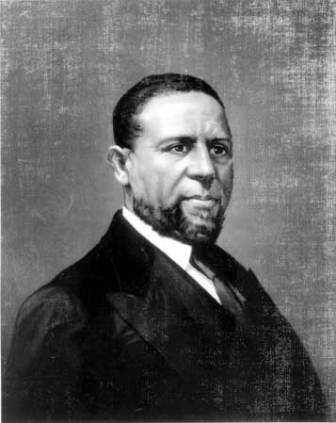 Hiram Revels of Mississippi became the first African American senator in 1870. He raised two black regiments during the Civil War and fought at the battle of Vicksburg in Mississippi. The Mississippi state legislature sent him to fill a vacancy in the U.S. Senate during Reconstruction, and he quickly became an outspoken opponent of racial segregation. Although Revels' term in the Senate lasted just a year, he broke new ground for African Americans in Congress.

Hiram Rhodes Revels was born to free parents in Fayetteville, North Carolina, on September 27, 1827. His father worked as a Baptist preacher, and his mother was of Scottish descent. He claimed his ancestors “as far back as my knowledge extends, were free,” and, in addition to his Scottish background, he was rumored to be of mixed African and Croatan Indian lineage. In an era when educating black children was illegal in North Carolina, Revels attended a school taught by a free black woman and worked a few years as a barber.

In 1844, Hiriam Revels moved north to complete his education. Revels attended the Beech Grove Quaker Seminary in Liberty, Indiana, and the Darke County Seminary for black students, in Ohio. In 1845, Revels was ordained in the African Methodist Episcopal (AME) Church. His first pastorate was likely in Richmond, Indiana, where he was elected an elder to the AME Indiana Conference in 1849. As an itinerant preacher, Revels traveled to speak in slave and free states. He would later recall: "I labored as religious teacher and educator in Indiana, Illinois, Kansas, and to some extent in Kentucky, Tennessee, and Missouri, during which, at times, I met with a great deal of opposition. I was imprisoned in Missouri in 1854, for preaching the gospel to Negroes, though I was never subjected to violence."

In the early 1850s, Revels married Phoebe A. Bass, a free black woman from Ohio, and they had six daughters. Although Revels was a successful minister, he desired to continue his education. He attended Knox College in Galesburg, Illinois for two years. After leaving Knox in 1857, Revels became a minister in the Methodist Episcopal Church in Baltimore, Maryland. At the same time, he became principal of an African American high school.

With the outbreak of the Civil War in 1861, Hiram Revels turned his resources toward support for the Union cause in Maryland, a border state with divided loyalties. Revels aided in the organization of two regiments of African American troops from Maryland. Having moved to St. Louis to organize a school for African Americans, he recruited African American men for service in a Missouri regiment in 1863. His recruiting ability and ministerial training equipped Revels for active service as a Union chaplain serving with a Mississippi regiment of free blacks. Some records indicate that Revels was for some time the provost marshal, or at least assisted the provost marshal, of Vicksburg, the militarily important Mississippi River town and scene of a bloody and prolonged Union siege.

At the conclusion of the war, Revels settled in Natchez, Mississippi, and joined the African Methodist Episcopal Church. He continued his pastoral duties and founded new churches. In 1868, Revels was elected alderman. Struggling to keep his political and pastoral duties separate and to avoid racial conflict, Revels earned the respect of both whites and African Americans. His moderation and efforts at conciliation led to his election as a state senator from Adams County, Mississippi. In 1870 Revels was elected as the first African American member of the United States Senate.

The election of Hiriam Revels was met with opposition from Southern conservative Democrats who cited the Dred Scott Decision which was considered by many to have been a central cause of the American Civil War. They argued that no black man was a citizen before the 14th Amendment was ratified in 1868. Because election to the Senate required nine years' prior citizenship, opponents of Revels claimed he could not be seated, having been a citizen by law for only two years. Supporters of Revels countered by stating that the Dred Scott decision applied only to those blacks who were of pure African blood. Revels was of mixed black and white ancestry, and therefore exempt, they said, and had been a citizen all his life. Hiriam Revels took his seat in the Senate, after contentious debate, on February 25, 1870 and served through March 4, 1871.

After his tenure as U.S. senator, Revels became president of Alcorn College, the first land grant college for black students, and remained there from 1871 to 1873. After leaving Alcorn, Hiriam Revels reentered the ministry, and served as the pastor of the Holly Springs, Mississippi ME church. In 1876, he again became president of Alcorn College, retiring in 1882. He later taught theology at Rust University in Holly Springs and became presiding elder in the ME church, serving the Upper Mississippi District.

On January 16, 1901, Revels died of a stroke while attending a ME conference. He is buried near his home in Holly Springs. "The Autobiography of Hiram Rhoades Revels Together with some Letters by and about Him, " was published in The Midwest Journal, in 1953. He is remembered as a fair politician, respected minister and dedicated educator.