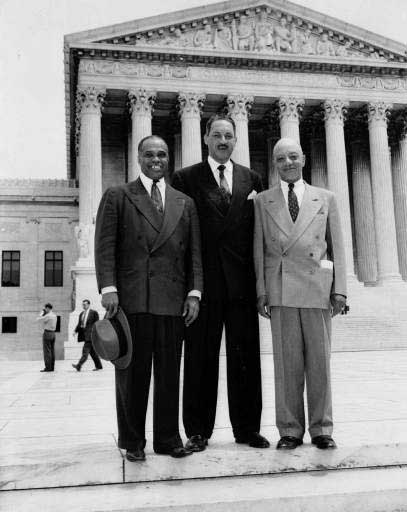 Thurgood Marshall was a prominent civil-rights lawyer and the first African-American justice of the US Supreme Court. He led a civil rights revolution in the 20th century that forever changed the landscape of American society. Thurgood Marshall, working through the courts to eradicate the legacy of slavery and destroying the racist segregation system of Jim Crow, along with Dr. Martin Luther King and Malcolm X had a profound and lasting effect on civil rights.

After completing high school in 1925, Thurgood followed his brother, William Aubrey Marshall, at the historically black Lincoln University in Chester County, Pennsylvania. His classmates at Lincoln included a distinguished group of future Black leaders such as the poet and author Langston Hughes, the future President of Ghana, Kwame Nkrumah, and musician Cab Calloway. Just before graduation, he married his first wife, Vivian "Buster" Burey.

Thurgood Marshall returned to his native Baltimore to practice law. Most of his clients were people who made a modest living. Many could not afford the services he rendered. However, personal circumstances did not stop him from handling the problems that were presented to him. Marshall handled numerous cases involving legal disputes, police brutality, evictions, and other civil rights issues. Due to his untiring dedication and skillful court presentations, he became known as the "little man's lawyer."

It was Thurgood Marshall's victory before the Supreme Court in Brown v. Board of Education of Topeka that established his reputation as a formidable and creative legal opponent and an advocate of social change. Students of constitutional law still examine the oral arguments of the case and the ultimate decision of the court from both a legal and a political perspective. Legally, Marshall argued that segregation in public education produced unequal schools for African Americans and whites which was a key element in the strategy to have the court overrule the “separate but equal” doctrine established in Plessy v. Ferguson in 1896. But it was Thurgood Marshall's reliance on psychological, sociological, and historical data that presumably sensitized the court to the deleterious effects of institutionalized segregation on the self-image, social worth, and social progress of African American children.

In 1961, after many successful years as a lawyer and judge fighting for civil rights and women's rights, Marshall was appointed to the Second Court of Appeals by President John F. Kennedy. In 1965, President Lyndon B. Johnson appointed Marshall the U.S. solicitor general, the chief legal officer of the United States working under the Attorney General, in charge of appeals to the Supreme Court. While in this position, Marshall won 14 of the 19 cases that he argued for the government.

During Marshall's tenure on the Supreme Court, he was a steadfast liberal, stressing the need for equitable and just treatment of the country's minorities by the state and federal governments. A pragmatic judicial activist, he was committed to making the U.S. Constitution work; most illustrative of his approach was his attempt to fashion a “sliding scale” interpretation of the Fourteenth Amendment's equal protection clause that would weigh the objectives of the government against the nature and interests of the groups affected by the law. Marshall's sliding scale was never adopted by the Supreme Court, though in several major civil rights cases of the 1970s the court echoed Marshall's views. He was also adamantly opposed to capital punishment and generally favored the rights of the national government over the rights of the states.

Marshall served on the Supreme Court as it underwent a period of major ideological change. In his early years on the bench, he fit comfortably among a liberal majority under the leadership of Chief Justice Earl Warren. As the years passed, however, many of his closest allies, including Warren, either retired or died in office, creating opportunities for Republican presidents to swing the pendulum of activism in a conservative direction. By the time he retired in 1991, he was known as “the Great Dissenter,” one of the last remaining liberal members of a Supreme Court dominated by a conservative majority.

After Judge Marshall Thurgood retired, President Bush replaced him with Clarence Thomas, a conservative African American judge who's viewpoints were in direct opposition to that of Marshall's.

After Marshall Thurgood died in 1993 there was no authoritative, thorough account of his life and the impact his work had on the nation. The combination of his reclusiveness and his standing in popular culture as an elderly, establishment figure blinded much of the nation to the importance of Marshall's work. Young people were especially uninformed about the critical role Marshall Thurgood had played in his fight for civil rights in America.