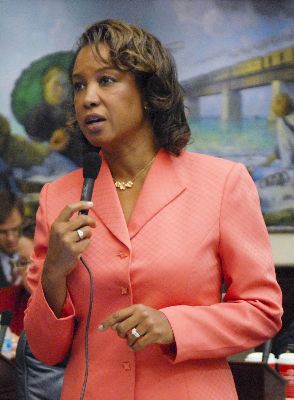 On January 4, 2011, Jennifer Carroll became the first African-American and the first woman elected to the position of Lt. governor in the State of Florida. She is only the second woman to hold the position, following Toni Jennings, who was appointed in 2003 to finish the term of Frank Brogan. Carroll previously served in the Florida House of Representatives from 2003 until 2010. Jennifer Carroll has been a legislator, small business owner, and veteran, and served the Florida House of Representatives’ District 13. Carroll is an example of the American Dream come true.

Jennifer Carroll was born August 27, 1959 in Port of Spain, Trinidad and Tobago. She moved to the United States at the age of eight. On television, she saw reports about civil rights and Martin Luther King's assassination. "That was the first time I experienced the conversation regarding race," she said. It wasn't until she graduated from high school and enlisted in the Navy in 1979 as a jet mechanic that she experienced racism firsthand, she said.

Continuing to serve in the navy for 20 years, Jennifer Carroll served as a jet mechanic and worked her way up through the ranks to retire as a Lieutenant Commander Aviation Maintenance Officer. While in the service she received numerous medals including the Meritorious Service Medal, two Navy Commendation Medals, two Navy Achievement Medals, a National Defense Service Medal, an Overseas Ribbon, and two Coast Guard Special Operation Ribbons.

Believing in the importance of a higher education, Jennifer Carroll received an Associate of Arts degree from Leeward Community College in 1981. She followed this degree with a Bachelor of Arts in political science from the University of New Mexico in 1985. In 2002, Jennifer Carroll established the public relations firm, 3N. & J.C. Corp., a business she later sold. She also briefly owned a Great Clips franchise.

Having strong political ties, Jennifer Carroll is a member of the Clay County Republican Executive Committee. She made two unsuccessful bids for the United States House of Representatives in 2000 and in 2002, but was elected successively to the Florida House since winning a special election in April 2003, when she became the first African-American female Republican ever elected to the Florida Legislature.

On September 2, 2010, after winning the Republican primary, Rick Scott named Carroll his running mate in the 2010 Florida gubernatorial election. Jennifer Carroll  became the first black woman to be a major party candidate for lieutenant governor in Florida's history, and the first black woman on any statewide Republican ticket. Scott and Carroll won the election, and assumed office on January 4, 2011.

Jennifer Carroll has become second-in-command in a Deep South state whose past is obscured by its sunny reputation. Between 1882 and 1930, there were 212 black victims of white lynch mobs in Florida, according to research from the University of Illinois. The 1923 Rosewood massacre, when a rampaging mob murdered residents of a black Levy County community and burned it to the ground, was just one of numerous incidents of racially motivated violence.

In Tallahassee, a Confederate flag went up outside the entrance to the state Capitol in 1978 and stayed there until 2001. That history is not lost on Carroll. At a pre-inaugural breakfast honoring women leaders, she paid tribute to the black women who paved the way. "I stand here before you today because of the brave work and sacrifices by women like Harriet Tubman, Sojourner Truth, Mary McCloud Bethune," she said. "Because of their hard work, society changed, mentality changed, policy changed and a clear path was made to make the journey to my ascension much easier."

Jennifer Carroll shares her running mate, Governor Rick Scott’s vision for the state of Florida and his conservative values. She believes in smaller government, lower taxes, personal responsibility, and personal freedom. She opposes the liberal agenda of higher taxes, government control of health care through Obamacare, and excessive regulation like Cap and Trade.

Jennifer Carroll is married to Nolan Carroll, Sr., and has three children. Her son, Nolan Carroll, Jr., played college football for University of Maryland, and has played for the Miami Dolphins, Philadelphia Eagles and Dallas Cowboys.