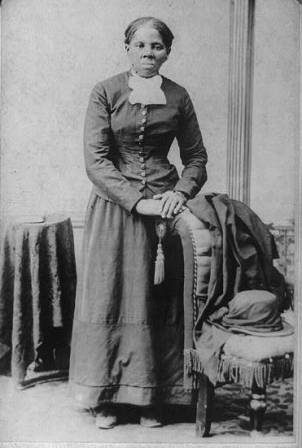 When fighting for Civil Rights, the greatest battle began not in the 1960's but during times of slavery. An African-American abolitionist, humanitarian, and Union spy during the American Civil War, Harriet Tubman is perhaps the most well-known of all the Underground Railroad's "conductors." During a ten-year span she made 20 trips into the South and escorted over 300 slaves to freedom. And, as she once proudly pointed out to Frederick Douglass, in all of her journeys she "never lost a single passenger."

Harriet Tubman was born as Araminta Ross sometime in 1820 or 1821 in Dorchester County, Maryland. Harriet was the 11th child born to Benjamin Ross and Harriet Greene who were slaves of Edward Brodas. Though her given name was Araminta, she was often called "Minty" as a child. But by the time she was an adult, she was calling herself Harriet.  Born into slavery she was often beaten by her masters to whom she had been hired out. Early in her life, she suffered a traumatic head wound when she was hit by a heavy metal weight thrown by an irate overseer, intending to hit another slave. The injury caused disabling seizures, headaches, powerful visionary and dream activity, and spells of extreme sleepiness which occurred throughout her entire life. A devout Christian, she ascribed her visions and vivid dreams to premonitions from God.

Sometime around 1844 Harriet married a free man named John Tubman. She gained permission to marry him from her owners and lived with him in his cabin, but she was required to continue working for her master. When Harriet told John of her dreams of one day gaining her freedom, he told her that she would never be free and, if she tried running away, he would turn her in. Nonetheless Harriet made her escape after her master died and she heard rumors that she and two of her brothers were to be sold to a chain gang. Her brothers left with her, but became scared, deciding not to take the risk, and so returned to the plantation. She traveled only at night, until she knew she had crossed the border between slaveholding and free states. She later said: "I looked at my hands to see if I was the same person now I was free. There was such a glory over everything and I felt like I was in heaven."  She made her way to Pennsylvania andthen Philadelphia where she found work and saved her money.

During 1851 Harriet Tubman returned to Maryland to rescue her family. She attempted to bring her husband north, but he had remarried and would not accompany her. Slowly, one group at a time, she brought relatives with her out of the state, and eventually guided dozens of other slaves to freedom.

Harriet Tubman became friends with some of the leading abolitionists and took part in anti-slavery meetings. Using the Wilmington, Delaware, home of Quaker abolitionist Thomas Garrett as a checkpoint, Harriet Tubman undertook some 20 hazardous missions in which she covertly journeyed down south, pinpointed slaves, and led them to freedom up north.

In April 1858, Tubman was introduced to the abolitionist John Brown, an insurgent who advocated the use of violence to destroy slavery in the United States. Although she never advocated violence against whites, she agreed with his course of direct action and supported his goals. Like Tubman, he spoke of being called by God, and trusted the divine to protect him from the wrath of slaveholders. She, meanwhile, claimed to have had a prophetic vision of meeting Brown before their encounter. For whatever reason, she was not available when he held his raid on Harpers Ferry. At any rate, the raid failed and Brown was convicted of treason and hanged in December. His actions were seen by abolitionists as a symbol of proud resistance, carried out by a noble martyr. Tubman herself was effusive with praise. She later told a friend: "He done more in dying, than 100 men would in living."

Harriet Tubman became known as 'Moses' and abolitionist Frederick Douglass said about her: 'Excepting John Brown - of sacred memory - I know of no one who has willingly encountered more perils and hardships to serve our enslaved people than Harriet Tubman.' Traveling by night and in extreme secrecy, Tubman risked her life over and over to help slaves to freedom. Large rewards were offered for the capture and return of many of the people she helped escape, but no one ever knew it was Harriet Tubman who was helping them. When the far-reaching United States Fugitive Slave Law was passed in 1850, she helped guide fugitives farther north into Canada, and helped newly freed slaves find work.

During the Civil War, Harriet Tubman served with the Union Army as a cook, laundress, nurse, scout, and spy behind Confederate lines. In 1862, she moved to Beaufort, South Carolina while it was occupied by the Union Army, where she helped hundreds of Sea Islander slaves transition from bondage to freedom. She also undertook scouting and spying missions, identifying potential targets for the Army, such as cotton stores and ammunition storage areas.

On the morning of June 2, 1863, Harriet Tubman guided three steamboats around Confederate mines in the waters leading to the shore. Once ashore, the Union troops set fire to the plantations, destroying infrastructure and seizing thousands of dollars worth of food and supplies. When the steamboats sounded their whistles, slaves throughout the area understood that it was being liberated. Tubman watched as slaves stampeded toward the boats. "I never saw such a sight," she said later, describing a scene of chaos. Although their owners, armed with handguns and whips, tried to stop the mass escape, their efforts were nearly useless in the tumult. As Confederate troops raced to the scene, steamboats packed full of slaves took off toward Beaufort. More than seven hundred slaves were rescued in the Combahee River Raid. Newspapers heralded Tubman's "patriotism, sagacity, energy, [and] ability",and she was praised for her recruiting efforts: most of the newly liberated men went on to join the Union army.

Tubman spent her remaining years in Auburn New York on a small plot of land she owned. She worked various jobs to support her elderly parents, and took in boarders to help pay the bills. One of the people Tubman took in was a Civil War veteran named Nelson Davis. He began working in Auburn as a bricklayer, and they soon fell in love. Though he was twenty-two years younger than she was, on March 18, 1869, they were married at the Central Presbyterian Churchand spent the next twenty years together, adopting a baby girl named Gertie in 1974.

Tubman worked in her later years to promote the cause of women's suffrage. A white woman once asked Tubman whether she believed women ought to have the vote, and received the reply: "I suffered enough to believe it." Tubman began attending meetings of suffragist organizations, and was soon working alongside women such as Susan B. Anthony and Emily Howland.

After her death in 1913, Harriet Tubman was buried in Fort Hill Cemetery in Auburn, with military honors. She has since received many honors, including the naming of the Liberty Ship Harriet Tubman, christened in 1944 by Eleanor Roosevelt. On June 14, 1914 a large bronze plaque was placed at the Cayuga County Courthouse, and a civic holiday declared in her honor. Freedom Park, a tribute to the memory of Harriet Tubman, opened in the summer of 1994 at 17 North Street in Auburn. In 1995, Harriet Tubman was honored by the federal government with a commemorative postage stamp bearing her name and likeness.