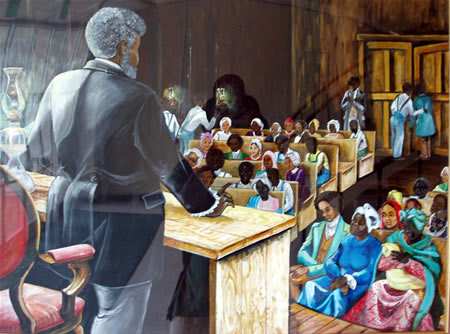 Denmark Vesey was an African American slave brought to the United States from the Caribbean of Coromantee background. After purchasing his freedom, he planned what would have been one of the largest slave rebellions in the United States. Word of the plans was leaked, and at Charleston, South Carolina, authorities arrested the plot's leaders before the uprising could begin. Vesey and others were tried, convicted and executed. Many antislavery activists came to regard Vesey as a hero. During the American Civil War, abolitionist Frederick Douglass used Vesey's name as a battle cry to rally African-American regiments, especially the 54th Massachusetts Volunteer Infantry.

Slaves did not endure their servitude passively. They resisted any way they could, whether it was barely noticeable insubordination, or acts of violence. For slaves, rebellion was the ultimate form of resistance and protest against slavery, although most slaves understood that an armed rebellion was paramount to suicide. Unlike the Caribbean, where massive slave revolts took place in Cuba, Jamaica and most famously Haiti, rebellion in the American South was difficult to carry out. White owners had a monopoly on fire arms and plantations were spread too far apart for the slaves to have the ability to communicate a large plan. Laws also made it difficult if not impossible for slaves to travel or congregate and bounties were offered for capturing any runaway slave. Despite the odds, several attempts were made for a slave rebellion. One such event took place in July 1816, when 300 fugitive slaves, with the aid of Indian allies held Fort Blount in Apalachicola, Florida, for several days before being subdued by U.S. military forces.

Although some have argued that the seizure of Fort Blount constituted the largest slave rebellion in British North America, usually four plots or rebellions have been described as the archetype of resistance to slavery: Gabriel’s Rebellion near Richmond, Virginia in 1800, Charles Deslondes’s near New Orleans  in 1811, Denmark Vesey’s in Charleston, South Carolina in 1822 and Nat Turner’s in Southampton County, Virginia in 1831.

Denmark Vesey, Rev. Morris Brown, and Nat Turner all used religion in planning armed slave revolts. The abolitionist movement was also deeply connected to the black church; it was in the basement of a black church that the New England Antislavery Society, the first such society, was organized in Boston in 1832. In 1843, black Ohio Baptists organized the Union Antislavery Baptist Society, the first black abolitionist society. Harriet Tubman and Sojourner Truth, two Christian women among others, also participated in the abolitionist movement.

About 1767, Denmark Vesey was born on the island of St. Thomas in the Danish West Indies, which today is the U.S. Virgin Islands. At a young age, Denmark assumed the surname of his owner, Joseph Vesey, who was the captain of a slave ship. Before they settled in Charleston, South Carolina in 1783, Denmark traveled along with his master on many slave-trading voyages.

While in Charleston, Denmark managed to educate himself and even learned to read. In 1800, seventeen years after his arrival in Charleston, Denmark won $1,500.00 in a street lottery and used $600.00 of his winnings to buy his freedom. Now free, he stayed on in Charleston and worked as a carpenter. Although a Presbyterian as late as April 1816, Vesey co-founded a branch of the African Methodist Episcopal Church in 1817. The church was temporarily shut down by white authorities in 1818 and again in 1820.

Inspired by the revolutionary spirit and actions of slaves during the 1791 Haitian Revolution, and furious at the closing of the African Church, Denmark Vesey began to plan a slave rebellion. His insurrection, which was to take place on Bastille Day, July 14, 1822, became known to thousands of blacks throughout Charleston and along the Carolina coast.

The plot called for Vesey and his group of slaves and free blacks to execute their enslavers and temporarily liberate the city of Charleston. Vesey and his followers planned to sail to Haiti to escape retaliation. His plan to destroy Charleston was greatly bolstered by an African-born conjurer named Gullah Jack. Having served as a “doctor” in Charleston for 15 years, Jack’s renown as a mystic allowed him to sway enslaved Africans of all multiple ethnic backgrounds who respected him as both conjurer and General of the plot.

Not only was Jack claimed to have a “charmed invulnerability” that would prevent him from being harmed at the hands of whites, but he also produced and distributed charms to slave combatants that were said to render them invincible. For Gullah Jack’s protective charms to work, conspirators had to first fast the night before the planned revolt. The following morning, they were to place the charms, consisting of crab claws, in their mouths to be fully protected from harm. The fact that not one slave questioned the validity of Jack’s powers during the course of the trials is singular testament to the continuing connection they had to African spiritual beliefs and values.

Sandy Vesey, one of Denmark's sons, was transported, probably to Cuba. Vesey's last wife Susan later immigrated to Liberia. Another son, Robert Vesey, survived to rebuild Charleston's African Methodist Episcopal Church in 1865. In response to white panic, a municipal guard of 150 men was established in Charleston in 1822. Half the men were stationed in an arsenal called the Citadel. In 1842, the South Carolina legislature replaced the expensive guardsmen with less expensive cadets. The arsenal was turned over to the newly established South Carolina Military Academy, which later became known as The Citadel.