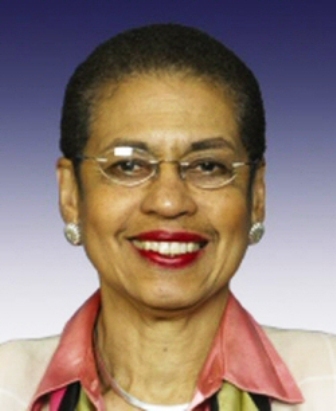 Eleanor Holmes is a civil rights activist whose work centers on the application of the Civil Rights Act of 1964 to women and sex discrimination. Working within the system Eleanor Holmes has seen both racial and sex discrimination first hand. She s a Delegate to Congress representing the District of Columbia. In her position she is able to serve on and vote with committees, as well as speak from the House floor. However, she is not permitted to vote on final passage of any legislation because she is not a full member of Congress.

Eleanor Holmes Norton was born on June 13, 1937 in Washington, D.C. to parents Coleman and Vela Holmes.  Both her parents were government employees.  Growing up in a well educated and politically conscious household caused Eleanor Holmes to be very aware of the surrounding struggles for African Americans.  At the age of 12, she recalled watching protests against a Washington, D.C. department store which allowed black shoppers but refused them entry into its bathrooms.

In 1955, Eleanor entered Antioch College in Yellow Springs, Ohio where she became heavily involved with civil rights work.  While in college she headed the local National Association for the Advancement of Colored People (NAACP) chapter and became a local activist working to desegregate public facilities in Ohio.  The emerging civil rights movement influenced her decision to enter Yale University in 1960 with the intention of becoming a civil rights lawyer.  In 1963 Holmes worked in Mississippi for the Student Non-Violent Coordinating Committee (SNCC), and also the Mississippi Freedom Democratic Party, started by Fannie Lou Hamer.  She graduated from Yale in 1963 with a Master’s in American Studies and a law degree in 1964.

Upon graduation from law school, she became a law clerk to Federal District Court Judge  Higginbotham. Marrying Edward Norton in 1965, the couple was divorced in 1993. In 1968 Eleanor Holmes Norton won the first case she argued before the U.S. Supreme Court. Norton, an unswerving advocate of free speech, argued on behalf of a white supremacist group that had been barred from holding a rally in Maryland.

Eleanor Holmes was also the lawyer for the female staff of Newsweek magazine, who in a landmark case were suing for sexual discrimination. When other lawyers wouldn't touch the case, the then pregnant Eleanor Norton jumped in to help. Surprisingly, at the time a woman was publisher, but that didn't seem to help their cause. "Women often don't recognize or are insensitive to, discrimination against women," Norton, told the press at the time. In the end the ACLU agreed not to press legal action if Newsweek were to set clear goals and a realistic timetable to fully integrate its female staff.

As an ACLU lawyer, Eleanor Holmes once even sued the mayor of New York City, John Lindsay, on behalf of the segregationist politician George Wallace, who was initially prevented from making a speech at Shea Stadium during his 1968 presidential campaign.

Somewhat ironically, in April of 1970, Mayor Lindsay awarded Norton her first political post as city commissioner of human rights. It was then that Eleanor Holmes held the first hearings in the country on discrimination against women. Prominent feminists from throughout the country came to New York City to testify, while Norton used the platform as a means of raising public awareness about the application of the Civil Rights Act of 1964 to women and sex discrimination. At the time of her appointment, Norton was quoted in McCall's magazine as saying, "As commissioner, I will attempt to see that no man is judged by the irrational criteria of race, religion, or national origin. And I assure you I use the word 'man' in the generic sense, for I mean to see that the principle of nondiscrimination becomes a reality for women as well."

Eleanor Holmes Norton went on to fight for civil rights in a variety of platforms, tenaciously battling prejudice and injustice. Combating housing discrimination, intervening to reverse a state ruling that denied a polio victim a teaching certificate, and suing a real estate broker who would not rent to blacks were just a few of the actions Norton took in New York City.

In 1973 Norton organized African American women from across the nation into the National Black Feminist Organization. President Jimmy Carter appointed Norton to be the first woman to chair the Equal Employment Opportunity Commission in 1977. There she worked to advance the status of women in the workplace until 1981. Norton released the Equal Employment Opportunity Commission's first set of regulations outlining what constituted sexual harassment and declaring that sexual harassment was indeed a form of sexual discrimination that violated federal civil rights laws. Fighting for Women's Rights, Eleanor Holmes Norton was also one of the founders of the Women's Rights Law Reporter, the first legal periodical to focus exclusively on women's rights.

During his 1988 bid for the presidency, Jesse Jackson named Norton his representative at the convention during debate over the Democratic party's platform. The party "outsider," Jackson was thought to have chosen Norton partly because she was so well respected among Democrats. Soon Ebony was calling her a "national Democratic Party power broker." When Walter Fauntroy, the man who had represented the District in Congress for 20 years, announced he would be stepping down in 1990 to run for mayor, Norton shifted her focus from the wide-ranging arena of national politics to the bread and butter concerns of Washington.