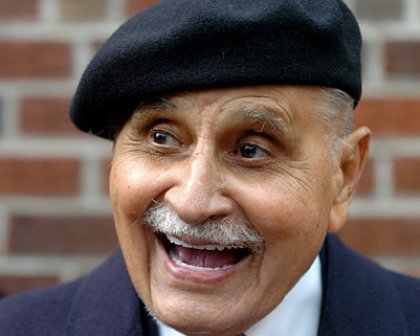 Percy Sutton was a pioneer in African American radio ownership in addition to his well known roles as a New York political power broker, Tuskegee Airman, civil rights attorney, and lawyer for Malcolm X and his family.  In the 1970s, Percy Sutton was a member of the Harlem circle dubbed the "Gang of Four," which included U.S. Rep. Charles Rangel, Basil Patterson, who became New York's secretary of state, and future New York Mayor David Dinkins. He served as Manhattan borough president from 1966 to 1977.

Sutton was born November 24, 1920 in San Antonio, Texas, the last of fifteen children born to Samuel ("S.J.") Sutton and Lillian Sutton. His father, born during the time of slavery and an early civil rights activist, was one of the first blacks in Bexar County, Texas, and used the initials "S.J." for fear his name would be shortened to Sambo. Both of Percy Sutton's parents were educators, his father a  principal of a segregated high school, and his mother a teacher.  In addition to being a full-time educator, S.J. farmed, sold real estate and owned a mattress factory, funeral home and skating rink.

Following in their parent's footsteps, all of Sutton's siblings graduated from college. His brothers included G.J. Sutton, who became the first black elected official in San Antonio, and Oliver Sutton, who became a judge on the New York Supreme Court.

At the age of twelve, Percy Sutton once stowed away on a passenger train to New York City, where he slept under a sign on 155th Street in Harlem. He returned home unscathed, but the following year, while passing out leaflets in an all-white neighborhood for the National Association for the Advancement of Colored People (NAACP), he was beaten by a policeman. Always a boy scout, Percy Sutton attained the rank of Eagle Scout in 1936 and was recognized with the Distinguished Eagle Scout Award as an adult. Sutton stated that scouting was a key factor in shaping his life.

Percy Sutton attended three historically black colleges, Prairie View Agricultural and Mechanical College in Texas, the Tuskegee Institute in Alabama, and Virginia's Hampton Institute, but failed to earn a degree. He did however learn to fly small planes, taking up stunt-flying on the barnstorming circuit, but gave it up after a friend crashed. Later, during World War II, he served as an intelligence officer with the Tuskegee Airmen, winning combat stars in the Italian and Mediterranean theaters.

Discharged with the rank of captain, Sutton went back to New York City and enrolled in college once again, this time on the G.I. Bill, which provided tuition aid for veterans. He entered Columbia University School of Law, and supported his wife Leatrice as dishwasher and hotel bellhop. Realizing he needed to work full-time, he transferred to Brooklyn College School of Law and took a steadier job as post office clerk; he also worked as a subway conductor for a time before earning his law degree in 1950. In 1951, after passing the New York bar exam, Percy Sutton enlisted once again in the military during the  Korean War. Sutton served as an Air Force intelligence officer in Washington, D.C., and later became the first black trial judge advocate in this branch of the service.

During the 1950s and 1960s, Sutton became one of America's best-known lawyers. He represented many controversial figures, such as Malcolm X. After the murder of Malcolm X in 1965, Sutton and his brother Oliver helped to cover the expenses of his widow, Betty Shabazz. Sutton's civil-rights advocacy made him a central figure in the civil rights movement and in Harlem. Being jailed with Stokely Carmichael and other activists endeared him to the Harlem community and showed many that he was willing to place himself in harm's way for his client's sake.

Sutton became involved in the civil-rights struggles down South during the 1960s. When scores of civil rights workers were arrested in 1963 and 1964 demonstrations, he and his firm defended them, and he also served as a consultant to the Student Nonviolent Coordinating Committee. Interested in political office, he ran for and won election to the New York State Assembly in 1964. In Albany, he became the spokesperson for the legislature's 13-member black caucus, and was instrumental in getting funding to establish the Schomburg Center for Research in Black Culture in Harlem, a branch of the New York Public Library system.

In 1981, Inner City bought the Apollo, the celebrated Harlem Theater famed for helping launch careers like those of Ella Fitzgerald and James Brown, at a bankruptcy sale for $225,000. Percy Sutton presided over a $20 million renovation, which included building a cable television studio used to produce the syndicated TV program, 'It's Showtime at the Apollo.' The theater reopened in 1985, but in 1992, a non-profit group took it over after  Sutton said he could no longer afford to run it.

Continuing to produce the TV show, which drew on the Apollo mystique, but was no longer taped at the Apollo, Percy Sutton fell into a tangled legal brouhaha, with New York State investigating members of the Apollo foundation's board. All were cleared of wrongdoing." However, a series of editorials on mismanagement by the Apollo foundation earned the New York Daily News a Pulitzer Prize in 1999. "Under the stewardship of Rangel and former Manhattan Borough President Percy Sutton, the Apollo's grand legacy has been reduced to a faded mural in the lobby," the board wrote." It also discovered that Sutton, whose syndicated TV show 'It's Showtime at the Apollo' raked in millions, was not paying 25% of its revenue to the Apollo Theatre Foundation as required by a 1992 license agreement.

In 1987, Sutton was awarded the Spingarn Medal, an award presented annually by the NAACP for outstanding achievement by an African American.