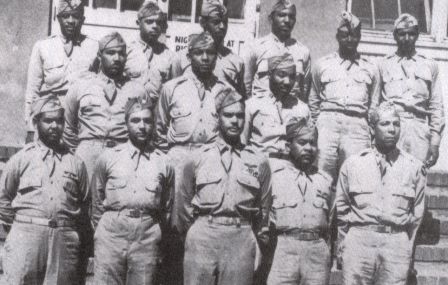 In the 1940's Tuskegee, Alabama became home to a "military experiment" to train America's first African-American military pilots. In time the "experiment" became known as the Tuskegee Experience and the participants as the Tuskegee Airmen.

During World War II, the U.S. military was racially segregated. Reflecting American society and law at the time, most black soldiers and sailors were restricted to labor battalions and other support positions. An experiment in the U.S. Army Air Forces, however, showed that given equal opportunity and training, African-Americans could fly in, command and support combat units as well as anyone. The USAAF's black fliers, the so-called "Tuskegee Airmen," served with distinction in combat and directly contributed to the eventual integration of the U.S. armed services, with the U.S. Air Force leading the way.

It was at Tuskegee Alabama, in the heart of the American South, that Booker T. Washington founded the "Tuskegee Normal School for Colored Teachers." He built the school (later known as Tuskegee Institute) into a major center for African-American education. He brought the best and brightest African Americans to work with him to fulfill his mission of educating African Americans for self-sufficiency. Washington and Tuskegee Institute became a major political force in America.

The Tuskegee Airmen were dedicated, determined young men who enlisted to become America's first black military airmen, at a time when there were many people who thought that black men lacked intelligence, skill, courage and patriotism. They came from every section of the country, with large numbers coming from New York City, Washington, Los Angeles, Chicago, Philadelphia and Detroit. Each one possessed a strong personal desire to serve the United States of America at the best of his ability. One leader of the Tuskegee Airmen, 99th Pursuit Squadron was Colonel Benjamin O. Davis Jr., son of the first African-American general, who became a general himself in 1965.

Those who possessed the physical and mental qualifications were accepted as aviation cadets to be trained initially as single-engine pilots and later to be either twin-engine pilots, navigators or bombardiers. Most were college graduates or undergraduates. Others demonstrated their academic qualifications through comprehensive entrance examinations. No standards were lowered for the pilots or any of the others who trained in operations, meteorology, intelligence, engineering, medicine or any of the other officer fields. Enlisted members were trained to be aircraft and engine mechanics, armament specialists, radio repairmen, parachute riggers, control tower operators, policemen, administrative clerks and all of the other skills necessary to fully function as an Army Air Corps flying squadron or ground support unit.

The budding flight program at Tuskegee received a publicity boost when First Lady Eleanor Roosevelt inspected it in March 1941.  and subsequently flew with African-American chief civilian instructor C. Alfred "Chief" Anderson. Anderson, who had been flying since 1929, and was responsible for training thousands of rookie pilots, took his prestigious passenger on a half-hour flight in a Waco biplane. Mrs. Roosevelt asked, "Can Negroes really fly airplanes?" He replied: "Certainly we can; as a matter of fact, would you like to take an airplane ride?" Over the objections of her Secret Service agents, Mrs. Roosevelt accepted. The agent called President Roosevelt, who replied, "Well, if she wants to do it, there's nothing we can do to stop her." After landing, she cheerfully announced, "Well, you can fly all right."

The subsequent brouhaha over the First Lady's flight had such an impact it is often mistakenly cited as the start of the CPTP at Tuskegee, even though the program was already five months old. Eleanor Roosevelt did use her position as a trustee of the Julius Rosenwald Fund to arrange a loan of $175,000 to purchase the land for Moton Field.

The Tuskegee program began officially in June 1941 with the 99th Pursuit Squadron at the Tuskegee Institute. The unit would consist of 47 officers and 429 enlisted men, and would be backed by an entire service arm. After basic training at Moton Field, they were moved to the nearby Tuskegee Army Air Field about 16 km (10 mi) to the west for conversion training onto operational types. Consequently, Tuskegee became the only Army installation containing all four phases of pilot training at a single location. Initial planning called for 500 personnel in residence at a time. By mid-1942, over six times that many personnel were stationed at Tuskegee, even though only two squadrons were training there.

The Tuskegee Airmen initially were equipped with Curtiss P-40 Warhawks fighter-bomber aircraft, briefly with Bell P-39 Airacobras (March 1944), later with Republic P-47 Thunderbolts (June–July 1944), and finally the fighter group acquired the aircraft with which they became most commonly associated, the North American P-51 Mustang (July 1944). When the pilots of the 332nd Fighter Group painted the tails of their P-47's red, the nickname "Red Tails" was coined. Bomber crews applied a more effusive "Red-Tail Angels" sobriquet.

The 99th was finally considered ready for combat duty by April 1943. It shipped out of Tuskegee on  April 2nd, bound for North Africa, where it would join the 33rd Fighter Group and its commander Colonel William W. Momyer. Given little guidance from battle-experienced pilots, the 99th's first combat mission was to attack the small strategic volcanic island of Pantelleria in the Mediterranean Sea, to clear the sea lanes for the Allied invasion of Sicily in July 1943. The air assault on the island began on May 30, 1943. The Italian population of 11,500 surrendered on 11 June: it was the first time in history an enemy's military resistance had been overcome solely by air power.

The 332nd Fighter group was awarded the Presidential Unit Citation for its' longest bomber escort mission to Berlin, Germany on March 24, 1945. During this mission, the Tuskegee Airmen (then known as the 'Red Tails') destroyed three German ME-262 jet fighters and damaged five additional jet fighters.

The U.S. Congress authorized $29 million in 1998 to develop the Tuskegee Airmen National Historic Site, with the University, Tuskegee Airmen Inc. and the National Park Service serving as partners in its development.