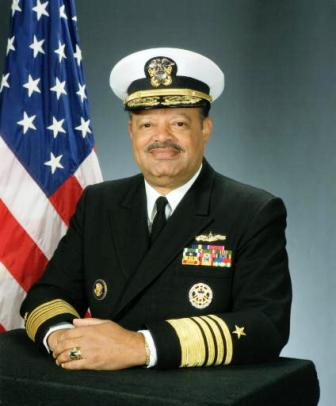 Joseph Paul Reason  was Commander in Chief, United States Atlantic Fleet from 1996 to 1999. Earlier in his career, as a commander, he was naval aide to the President of the United States, Jimmy Carter, from December 1976 to June 1979. In 1996. Vice Admiral J. Paul Reason made history when he became the first Black promoted to the rank of four-star admiral in the U.S. Navy. It took the Navy 135 years from the date the Union Navy began enlisting African Americans in 1861 to promote a black man to four-star admiral.

Joseph Paul Reason was born in Washington D.C. on March 22, 1941. The son of Joseph Reason, a professor of romance languages and director of libraries at Howard University, and his wife, Bernice, a high school teacher of biology, Paul  participated in an integrated Boy Scout Troop and attended McKinley Technology High School. In 1957-58, during his senior year in High School, Reason became interested in the Naval Reserve Officer Training Corps, but was not selected although he ranked second out of 300 applicants.

Paul Reason spent his freshman year at Swarthmore College, his sophomore year at Lincoln University in Pennsylvania, and his junior year at Howard University. As he was completing his junior year at Howard University, Congressman Charles Diggs, Jr., contacted him and encouraged him to apply to the United States Naval Academy. Accepted for the Naval Academy Class of 1965, Reason reported to Annapolis as a Midshipman on June 28th 1961 and graduated with a Bachelor of Science degree in naval science and a commission as an Ensign in June of 1965. Three days later, he married Diane Lillian Fowler in the Naval Academy Chapel.

Following his commissioning, from June to September 1965, Reason served as operations officer in USS J. Douglas Blackwood (DE-219), before attending the Naval Nuclear Power School at Bainbridge, Maryland. Admiral Reason followed this with training from the Naval Nuclear power training Unit at Schenectady, New York. On completion of his nuclear power training, Reason was assigned to USS Truxtun  and participated in the ship’s first deployment to Southeast Asia in 1968 during the Vietnam War. In September 1969, Admiral Paul Reason entered the Naval Postgraduate School as a student, where he earned a Master of Science degree in computer systems management.

In December 1970, Reason was assigned to the nuclear aircraft carrier USS Enterprise, in which he served until January 1973, making two deployments to the Southeast Asian and Indian Ocean areas. Admiral Reason then returned to school, attending the Naval Destroyer School at Naval Station Newport, Rhode Island, followed by the Combat System Technical Schools Command at Mare Island.

Returning to USS Truxtun, Reason served as her Combat Systems Officer in 1976. In December 1976, when Admiral J. Paul Reason was assigned to the White House as Naval Aide to the President of the United States, Jimmy Carter.

From sea duty, Reason was assigned to Naval Reactors, Department of Energy for instruction until April 1983, when he took command of the nuclear powered guided missile cruiser USS Bainbridge  until July 1986, during which period he was promoted to Captain.

Selected for promotion to Rear Admiral (lower half) in June 1986, J. Paul Reason served as Commander of the Naval Base in Seattle, Washington from July 1986 to September 1988, where he was responsible for all naval activities in the states of Washington, Oregon, and Alaska.

Returning to sea duty, Admiral Reason commanded Cruiser-Destroyer Group One until November 1990, then, promoted to Rear Admiral (upper half). At the same time, he commanded Battle Group Romeo in operations in the Pacific, Indian Ocean, and Persian Gulf regions. Following his selection to Vice Admiral in 1991, He commanded Naval Surface Forces, U.S. Atlantic Fleet. In November 1996, he was selected for promotion to four-star admiral and assigned as Commander in Chief, United States Atlantic Fleet until he retired from active duty in 1999.

In addition to being the Navy's first African-American four-star admiral, Reason is part of a history-making trio of black four-star military officers. The three military departments for the first time have four-star African-American officers on active duty at the same time. The other two are Gen. Johnnie E. Wilson, commander of the Army Materiel Command in Alexandria, Va., and Gen. Lloyd W. "Fig" Newton, commander of the Air Education and Training Command at Randolph Air Force Base, Texas. Reason is a U.S. Naval Academy graduate, while Newton was commissioned through college ROTC and Wilson, through Officer Candidate School after six years as an enlisted man. "I totally attribute my success to those who have gone before me -- all minorities," Reason said. "People who have broken down barriers by showing others they're capable of doing the expected task, that they can perform and it has nothing to do with color of skin or ethnicity -- nothing to do with anything other than a person's capabilities."

Admiral Reason was Vice President for Ship Systems at SYNTEK Technologies, Inc. of Arlington, Virginia, from the end of his naval service in 1999 until 2000. He then became President and COO, and Vice Chairman of Metro Machine Corp., a ship repair company from 2000 to 2006.

He has been a Director of Amgen, Inc., Norfolk Southern Corporation, Wal-Mart Stores, Inc., Todd shipyards, as well as a member of the Oak Ridge Associated Universities, and the National War Powers Commission. In 2008, he was appointed to a four-year term as a member of the Secretary of the Navy's Advisory Subcommittee on Naval History.