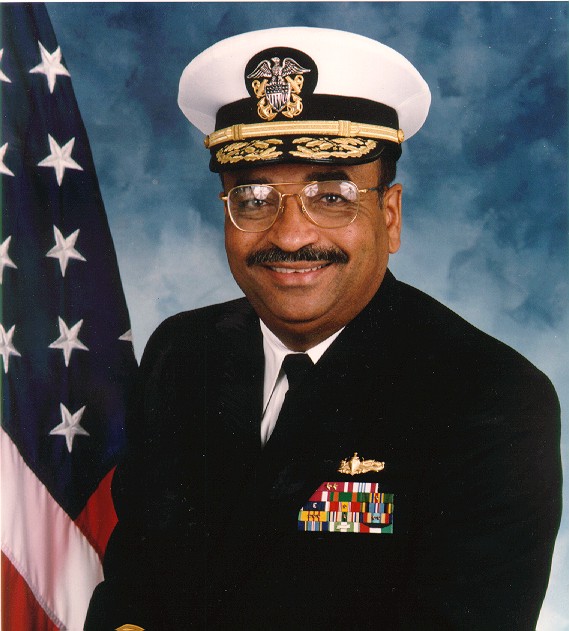 In 1996 Admiral Edward Moore Jr. served as commander of the U.S. naval forces in the Persian Gulf, where 44 missiles were launched against Iraqi leader Saddam Hussein and his troops to force an Iraqi withdrawal from the Kurdish region's exclusion zone created by the U.S. and its allies to protect the Kurds. Admiral Ed Moore began serving in the armed forces in 1963 when he enlisted in the U.S. Naval Reserve.

Edward Moore, Jr., son of Mr. and Mrs. Edward Moore, Sr., attended high school in Little Rock, Arkansas, prior to enlisting in the U.S. Naval Reserve in 1963 and subsequent commissioning as an Ensign after graduating from Southern Illinois University in June 1968. In August 1974, Ed Moore, Jr. earned a Master’s degree in Business Administration from Naval Postgraduate School.

As vice admiral, Moore was the highest ranking African-American naval officer. "I still hope one day that (skin color) won't matter in this country," said Moore. Moore's father had experienced a Navy divided by race, where an African-American could only aspire to be a steward, a worker in the crew or officers' mess. And, while the Navy was officially desegregated when the younger Moore enlisted in his hometown of Little Rock, Ark., African-Americans rarely held officer ranks, and harassment and discrimination abounded. But, as a young enlisted sailor, Moore received a chance at university schooling and an officer's rank. "The organization continued to offer me the opportunity and the challenge to go to the next stage," said Moore.

In the '80s Admiral Ed Moore served aboard the USS Lewis B. Puller and the USS Coupens. Moore led the successful tomahawk strike against a sensitive target in Iraq in January 1993.

Vice Admiral Edward Moore Jr.,commanded the Naval Surface Forces and supervised, from his San Diego headquarters, 84 naval ships located throughout the world. Vice Admiral Moore, is the son of a World War II chief petty officer and  has deep roots in the Navy.

Retiring in May of 2001, Admiral Edward Moore was the highest ranking African American in the navy at that time. Since his retirement Admiral Moore was  appointed vice president of systems integration for the applied technology group at Anteon Corp., in San Diego and  directed the company's surface Navy programs, including the tactical data links, fleet support and surface warfare engineering programs. Moore, who began his Navy career as a seaman and retired as a vice admiral after 38 years of service, turned over his command of the Pacific Fleet's surface forces to Vice Adm. Timothy LaFleur in 2001.

Vice Admiral Moore has been awarded the Legion of Merit Medal with four gold stars, the Defense Meritorious Service Medal, the Meritorious Service Medal, the Navy Achievement Medal, and other service and campaign ribbons including the Coast Guard Special Operations Service Ribbon. He is a life member of KAPPA ALPHA PSI Fraternity Inc. and the National Naval Officers Association.