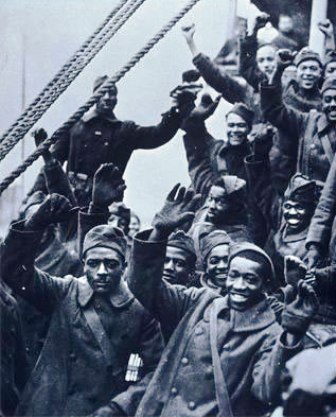 While the Great War raged in Europe for three long years, America steadfastly clung to neutrality. It was not until April 2, 1917, that President Wilson asked Congress to declare war on Germany. "The world," he said, "must be made safe for democracy." Quickly, Americans swung into action to raise, equip, and ship the American Expeditionary Force to the trenches of Europe.

Participation in the war effort was problematic for African Americans. While America was on a crusade to make the world safe for democracy abroad, it was neglecting the fight for equality at home. Plessy v. Ferguson (1896) established that the 14th Amendment allowed for separate but equal treatment under the law. In 1913 President Wilson, in a bow to Southern pressure, even ordered the segregation of federal office workers. The U.S. Army at this time drafted both black and white men, but they served in segregated units. After the black community organized protests, the Army finally agreed to train African American officers but it never put them in command of white troops.

The 369th Infantry helped to repel the German offensive and to launch a counteroffensive. General John J. Pershing assigned the 369th to the 16th Division of the French Army. With the French, the Harlem Hellfighters fought at Chateau-Thierry and Belleau Wood. All told they spent 191 days in combat, longer than any other American unit in the war. "My men never retire, they go forward or they die," said Colonel Hayward. Indeed, the 369th was the first Allied unit to reach the Rhine. In re-capping the story of the 369th Arthur W. Little, who had been a battalion commander, wrote in the regimental history From Harlem to the Rhine that it was official that the outfit was 191 days under fire, never lost a foot of ground or had a man taken prisoner, though on two occasions men were captured but they were recovered. Only once did it fail to take its objective and that was due largely to bungling by French artillery support.

Dubbing themselves “Men of Bronze,” the soldiers of the 369th were lucky in many ways compared to other African Americans in 1918 France.  They enjoyed a continuity of leadership, commanded throughout the war by one of their original organizers and proponents, Colonel William Hayward.  Unlike many white officers serving in the black regiments, Colonel Hayward respected his troops, dedicated himself to their well-being, and leveraged his political connections to secure support from New Yorkers.

Although African American valor usually went unrecognized, well over one hundred members of the regiment received American and/or French medals, including the first two Americans, Corporal Henry Johnson and Private Needham Roberts, to be awarded the coveted French Croix de Guerre. In May 1918 they were defending an isolated lookout post on the Western Front, when they were attacked by a German unit. Though wounded, they refused to surrender, fighting on with whatever weapons were at hand. The extraordinary valor of the 369th earned them fame in Europe and America. Newspapers headlined the feats of Corporal Henry Johnson and Private Needham Roberts.

On September 25, 1918 the French 4th Army went on the offensive in conjunction with the American drive in the Meuse-Argonne. The Harlem Hellfighters turned in a good account of itself in heavy fighting, sustaining severe losses. They captured the important village of Séchault. At one point the 369th advanced faster than French troops on their right and left flanks. There was danger of being cut off. By the time the regiment pulled back for reorganization, it had advanced fourteen kilometers through severe German resistance.

Spending over six months in combat, perhaps the longest of any American unit in the war, the 369th suffered approximately fifteen hundred casualties but received only nine hundred replacements. The poor replacement system coupled with no respite from the line took its toll, leaving the unit exhausted by the armistice in November.

The 369th Infantry Regiment was the first New York unit to return to the United States, and was the first unit to march up Fifth Avenue from the Washington Square Park Arch to their Armory in Harlem. In December 1917, when Colonel Hayward's men had departed from New York City, they had not been permitted to participate in the farewell parade of New York's National Guard, the so-called Rainbow division. The reason Hayward was given was that "black is not a color in the Rainbow." Now Colonel Hayward pulled every political string he could to assure his men would be rewarded with a victory parade when they came home in February 1919. Crowds thronged New York City's Fifth Avenue as the 369th marched to the music of their now- famous regimental jazz band leader, James Reese Europe. After the parade, city officials honored the troops at a special dinner and their unit was placed on the permanent list with other veteran units.