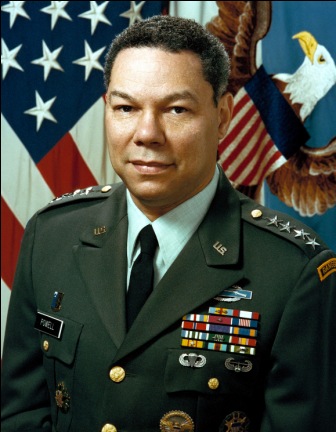 General Powell was a professional soldier for 35 years. During that time he held many different command and staff positions. His last assignment, from October 1, 1989, to September 30, 1993, was as the 12th Chairman of the Joint Chiefs of Staff, the highest military position in the Department of Defense. During this time he oversaw 28 military and political crises, including Operation Desert Storm in the victorious 1991 Persian Gulf War. In 2001, Powell became the first African-American U.S. secretary of state, under President George W. Bush.

Colin Luther Powell was born in Harlem in 1937. His parents were Jamaican immigrants who stressed the importance of education and personal achievement. Powell grew up in the South Bronx, where he graduated from high school without having formed any definite ambition or direction in life. He entered the City College of New York to study geology and it was there, by his own account, that he found his calling when he joined the Reserve Officers Training Corps (ROTC). He became commander of his unit's precision drill team and graduated in 1958 at the top of his ROTC class, with the rank of cadet colonel, the highest rank in the corps.

Powell was a captain during the Vietnam War, serving as a South Vietnamese Army adviser from 1962 to 1963. In 1963, Lieutenant Powell was wounded by a punji-stick booby trap while patrolling the Vietnamese border with Laos. He was awarded the Purple Heart, and later that year, the Bronze Star. Powell served a second tour of duty in Vietnam in 1968-69. During this second tour he was injured in a helicopter crash. Despite his own injuries, he managed to rescue his comrades from the burning helicopter and was awarded the Soldier's Medal. In all, he has received 11 military decorations, including the Legion of Merit.

General Colin Powell was charged with investigating a detailed letter by Tom Glen (a soldier from the 11th Light Infantry Brigade), which backed up rumored allegations of the My Lai Massacre. Powell wrote: "In direct refutation of this portrayal is the fact that relations between American soldiers and the Vietnamese people are excellent." Later, Powell's assessment would be described as whitewashing the news of the massacre, and questions would continue to remain undisclosed to the public. In May 2004 Powell said to Larry King, "I mean, I was in a unit that was responsible for My Lai. I got there after My Lai happened. So, in war, these sorts of horrible things happen every now and again, but they are still to be deplored."

Powell earned an MBA at George Washington University in Washington, DC, and after being promoted to major, won a White House fellowship. Powell was assigned to the Office of Management and Budget during the administration of President Nixon.

In his autobiography, My American Journey, Powell named several officers he served under that inspired and mentored him. As a lieutenant colonel serving in South Korea, Powell was very close to General Henry "Gunfighter" Emerson. Powell said he regarded Emerson as one of the most caring officers he ever met. Emerson was reputedly eccentric; he insisted his troops train only at night and made them repeatedly watch the television film Brian's Song to promote racial harmony. Powell always professed, however, that what set Emerson apart, was his great love of his soldiers and concern for their welfare.

In the early 1980s, Powell served at Fort Carson, Colorado. After he left Fort Carson, Powell became senior military assistant to Secretary of Defense Caspar Weinberger, whom he assisted during the 1983 invasion of Grenada and the 1986 airstrike on Libya.

In 1986, General Colin Powell took over the command of V Corps in Frankfurt, Germany, from Robert Lewis "Sam" Wetzel. Following the Iran Contra scandal, Powell became Ronald Reagan's National Security Advisor, serving from 1987 to 1989. In April 1989, Powell was promoted to General and briefly served as the Commander in Chief, Forces Command, headquartered at Fort McPherson, Georgia. Later that year, President George H.W. Bush selected him as Chairman of the Joint Chiefs of Staff.

In 2001, then-President–elect George W. Bush nominated General Colin L. Powell as U.S. Secretary of State. The Senate easily approved the nomination, and General Powell became the first African American to hold the post. Some of his duties include serving as the President's principal adviser on U.S. foreign policy, conducting negotiations relating to U.S. foreign affairs, and negotiating all treaties with foreign governments.