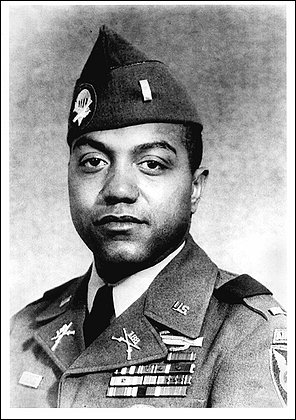 First Lt. Vernon J. Baker was an Army infantryman who, more than 50 years after the end of World War II, became the only surviving African American to receive the Medal of Honor for his heroic actions during the war. In 1993, the Army commissioned a study led by researchers from Shaw University in Raleigh, N.C., to determine whether there had been a racial disparity in how the Medal of Honor was awarded during World War II. Of the more than 400 Medals of Honor awarded, not one of the 1.2 million African Americans who served in the war was a recipient. After researchers found the discrepancy, the Army recommended seven African American soldiers for the country’s most prestigious military honor, including First Lt. Vernon J. Baker.

First Lt. Vernon J. Baker was awarded the medal of honor for his actions on April 5th and 6th 1945 near Viareggio, Italy, when he and his platoon killed 26 enemy soldiers and destroyed six machine gun nests, two observer posts and four dugouts.  First Lieutenant Vernon Baker, killed nine Germans in a pre-dawn battle at an enemy stronghold. With two-thirds of his company wounded or dead and no reinforcements in sight, Baker's commander ordered a withdrawal. Breaking into tears, Baker protested, "Captain, we can't withdraw. We must stay here and fight it out."  Vernon Baker also earned a distinguished service cross, only one of nine African Americans so honored in World War II.

His medal of honor citation read:
For extraordinary heroism in action on 5 and 6 April 1945, near Viareggio, Italy. Then Second Lieutenant Baker demonstrated outstanding courage and leadership in destroying enemy installations, personnel and equipment during his company's attack against a strongly entrenched enemy in mountainous terrain. When his company was stopped by the concentration of fire from several machine gun emplacements, he crawled to one position and destroyed it, killing three Germans. Continuing forward, he attacked and enemy observation post and killed two occupants. With the aid of one of his men, Lieutenant Baker attacked two more machine gun nests, killing or wounding the four enemy soldiers occupying these positions. He then covered the evacuation of the wounded personnel of his company by occupying an exposed position and drawing the enemy's fire. On the following night Lieutenant Baker voluntarily led a battalion advance through enemy mine fields and heavy fire toward the division objective. Second Lieutenant Baker's fighting spirit and daring leadership were an inspiration to his men and exemplify the highest traditions of the Armed Forces.

Vernon Baker was born on December 17, 1919, in Cheyenne, Wyoming, the youngest of three children. After his parents died in a car accident when he was four, he and his two sisters were raised by their grandparents. His grandfather Joseph S. Baker, a railroad worker in Cheyenne, taught him to hunt in order to feed the family and became "the most influential figure in Vernon's life."

Vernon Baker graduated from high school in his grandfather's hometown of Clarinda, Iowa. He then worked as a railroad porter, a job he despised, until his grandfather's death from cancer in 1939. A series of menial jobs followed until his enlistment in the U.S. Army in mid-1941. At his first attempt to enlist, in April 1941,Vernon Baker was turned away, the recruiter stating "We don't have any quotas for you people." He tried again weeks later with a different recruiter and was accepted; he requested to become a quartermaster but was instead assigned to the infantry.

Baker entered the Army on June 26, 1941, six months prior to the U.S. entry into World War II. He went through training at Camp Wolters, Texas, and after completing Officer Candidate School was commissioned as a second lieutenant on January 11, 1943.

In June 1944, Baker was sent to Italy with the all-black 92nd Infantry Division. He was wounded in the arm in October of that year, hospitalized near Pisa, and in December rejoined his unit in reserve along the Gothic Line. In early spring, 1945, his unit was pulled from the reserves and placed in active combat. On the morning of April 5, he participated in an attack on the German stronghold of Castle Aghinolfi. During the assault, Baker led his heavy weapons platoon through German army defenses to within sight of the castle, personally destroying three machine gun nests, two observation posts, two bunkers, and a network of German telephone lines along the way. It was for these actions that he was later awarded the Medal of Honor.

After the end of the war, Baker remained in Europe with the Allied occupation forces until 1947. He later joined the Army Airborne forces and left the military in 1968 as a first lieutenant.

Eventually Baker retired to northern Idaho. Then one day he received a call telling him he was to receive a Congressional Medal of Honor. At first he was astonished. Then he was angry. When asked how he felt about getting the honor fifty years late, Baker responded that he was angry because it was something that he felt should have been done a long time ago. "If I was worthy of receiving the Medal of Honor in 1945, I should have received it then. I like to be right and I know in my heart that we were right. And we were a heck of a lot better than the people that ran us down thought we were. But receiving the honor now means that every black solider that fought in the Second World War has been vindicated, every one".