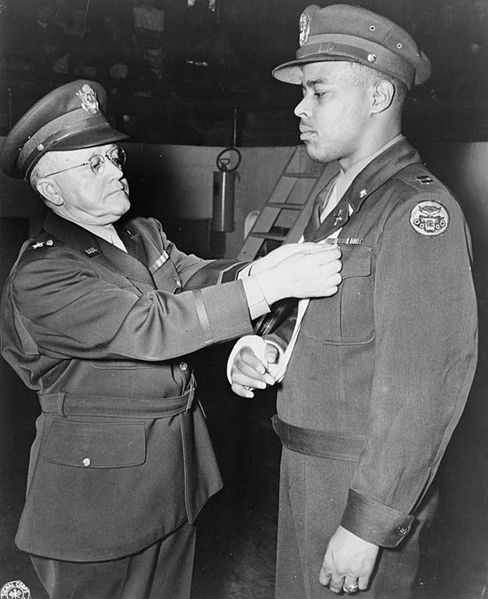 Captain Charles Thomas became the second black soldier to receive the Distinguished Service Cross, the nation's second highest honor. In front of his admirers the soft-spoken serviceman played down his heroics. "I was just trying to stay alive out there" he remarked.

His fellow soldiers and officers weren't as modest. They believed Thomas deserved the Medal of Honor, the nation's highest military tribute. It took fifty years, but in 1997 Captain Charles Thomas was one of seven African American World War II heroes given the distinguished Medal of Honor by President Clinton. Vernon Baker was the only recipient still living and present to receive his award; the other six soldiers received their awards posthumously, with their medals being presented to family members.

Charles Thomas was born on 17 April 1920, in Birmingham, Alabama. His family soon moved to Detroit at a time when the city's black population was rapidly growing. As a child, Thomas showed a bookish interest in planes and electronics. After graduating from Cass Technical High School in 1938, he worked with his father at the Ford River Rouge factory making steel. He also enrolled at Wayne State University to study mechanical engineering but the war interfered. Thomas was drafted and entered the army in January 1942.

He started as an infantryman but when the army began forming tank destroyer units, Thomas was transferred to Camp Wolters in Texas, for officer training school. He was commissioned a second lieutenant in March 1943 and reported to Camp Hood in Texas, to join the 614th Tank Destroyer Battalion. While the soldiers were black, most of the officers were white. Thomas also noticed the stark differences between the 614th and white units. Black units were forced to use older, less efficient equipment that frequently needed repairs, and recreational facilities were nonexistent for black soldiers and officers.

On December 14, 1944, Thomas led a task force storming Climbach, consisting of a platoon from the 756th Tank Battalion and a reinforced company of the 411th Infantry Regiment, 103rd Infantry Division, led by a platoon of his tank destroyers. Approaching Climbach, Thomas' armored scout car was knocked out by enemy fire and he was wounded.

The lieutenant helped his crew out of the vehicle, but as he left the car's protection, he was again wounded in the chest, legs and arms. Despite his wounds, Thomas directed the dispersal and emplacement of the anti-tank guns, which then returned fire and covered the attempt by the rest of the task force to outflank the defenders. He briefed one of his platoon leaders, a junior lieutenant, on the general situation, and only when he was sure the situation was under control did he allow himself to be evacuated. The platoon continued to fight for four hours, losing two of its four guns and half its men as casualties (3 dead, 17 wounded).

The strong performance of the platoon ensured the capture of the town and forced the defenders to withdraw to the Siegfried Line; the unit was awarded a Distinguished Unit Citation. It was the first black combat unit, and the first unit attached to the 103rd Division, to be so honored, and its men received four Silver Stars and nine Bronze Stars. Thomas himself was awarded the Distinguished Service Cross for his part in the engagement, and returned home a hero, though he played down his role - "I know I was sent out to locate and draw the enemy fire, but I didn't mean to draw that much."

Thomas remained in the Army, and retired with the rank of Major. In the 1990s, following a study which indicated severe racial discrimination in the process of awarding medals during the war, it was recommended that seven Distinguished Service Crosses be upgraded to Medals of Honor, and Thomas was awarded the Medal of Honor posthumously on January 13, 1997.

Captain Charles Thomas' Citation for the Medal of Honor Reads:
For extraordinary heroism in action on 14 December 1944, near Climbach, France. While riding in the lead vehicle of a task force organized to storm and capture the village of Climbach, France, then First Lieutenant Thomas's armored scout car was subjected to intense enemy artillery, self-propelled gun, and small arms fire. Although wounded by the initial burst of hostile fire, Lieutenant Thomas signaled the remainder of the column to halt and, despite the severity of his wounds, assisted the crew of the wrecked car in dismounting. Upon leaving the scant protection which the vehicle afforded, Lieutenant Thomas was again subjected to a hail of enemy fire which inflicted multiple gunshot wounds in his chest, legs, and left arm. Despite the intense pain caused by these wounds, Lieutenant Thomas ordered and directed the dispersion and emplacement of two antitank guns which in a few moments were promptly and effectively returning the enemy fire. Realizing that he could no longer remain in command of the platoon, he signaled to the platoon commander to join him. Lieutenant Thomas then thoroughly oriented him on enemy gun dispositions and the general situation. Only after he was certain that his junior officer was in full control of the situation did he permit himself to be evacuated. First Lieutenant Thomas' outstanding heroism were an inspiration to his men and exemplify the highest traditions of the Armed Forces.