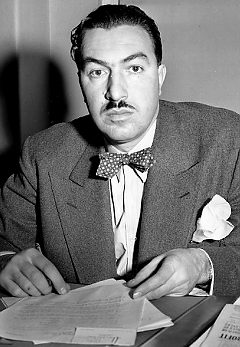 Adam Powell Jr., was the first person of African-American descent elected to Congress from New York. He was both a pastor and a politician and represented Harlem in Congress. In 1961, after sixteen years in the House, he became chairman of the Education and Labor Committee. As Chairman, he supported the passage of important social legislation but was removed from his seat by Democratic Representatives-elect of the 90th Congress following allegations of corruption.

Few people under 50 may know his name now, but Adam Clayton Powell was the most powerful black politician in the country during the 1950s, helping create landmark programs such as Medicare, Medicaid and Head Start, and even contributing to the Civil Rights Act of 1964. As Harlem's Congressman from 1945 until 1971, his legislative and personal efforts drove the desegregation of public schools, of the military, even of the U.S. Capitol itself.

Adam Clayton Powell Jr., was born in New Haven, Connecticut, on November 29, 1908. His father, Adam Clayton Powell, Sr., was a Baptist minister and pastor of the Abyssinian Baptist Church in the Harlem neighborhood of New York City. The Senior Powell missed being born into slavery by only a month.

Adam Powell Jr., attended Townsend Harris High School. As an undergraduate, he studied at the City College of New York and later at Colgate University. Upon graduation, his parents gave him a present of a trip to Europe, the Holy Land, and Egypt. When he returned, he enrolled in Union Theological Seminary, then later in Columbia University Teachers' College, where he eventually earned a master's degree in religious education.

While he worked on postgraduate studies, Powell helped thousands in his community to eat and find clothes and jobs. The Great Depression had America on the dole and in despair. As assistant pastor under his father at Abyssinian, Powell helped operate a free food pantry, job referral service, and literacy classes. His compassion became legendary when it was rumored that Adam once took the shoes from his own feet and gave them to a poor man for whom the church clothing bin had no proper sizes.

In 1941, Adam Clayton Powell Jr., became New York City's first African-American councilman. By 1944, he had won a seat in Congress. It was heady, but lonely as one of the only two African Americans in the U.S. House; particularly since the other, William Dawson of Chicago, was more seen than heard, careful to not upset the status quo. He went on to be a trailblazer in Congress, paving the way for the next generation of African-American politicians. After holding office for 25 years, he was ousted in the Democratic primary in 1970 by Charles Rangel.

Adam Powell didn't behave like most African-American politicians. "I'm the first bad Negro they've had in Congress," he bragged. He made more enemies on Capitol Hill than perhaps any legislator before or since.

Voters from Harlem elected Powell as their representative nearly two dozen times. With long service in Congress comes seniority and ultimately the chance to head one of the powerful committees that draft bills that the full House and Senate eventually vote on. After the election of 1960, Powell took over as chairman of the House Education and Labor Committee.

Adam Powell was instrumental in passing legislation that made lynching a federal crime, as well as bills that desegregated public schools. He challenged the Southern practice of charging Blacks a poll tax to vote and stopped racist Congressmen from saying the word "nigger" in sessions of Congress.

However, by the mid-1960s, Powell was increasingly being criticized for mismanaging his committee's budget, taking trips abroad at public expense, and missing sittings of his committee. He was also under attack in his District, where his refusal to pay a slander judgment made him subject to arrest. He spent increasing amounts of time in Florida.

In January 1967, the House Democratic Caucus stripped Powell of his committee chairmanship. The full House refused to seat him until completion of the Judiciary Committee's investigation. Powell urged his supporters to "keep the faith, baby" while the investigation was under way. On March 1, the House voted 307 to 116 to exclude him. Powell said, "On this day, the day of March in my opinion, the end of the United States of America as the land of the free and the home of the brave."

Powell won the Special Election to fill the vacancy caused by his exclusion but did not take his seat. He sued in Powell v. McCormack to retain his seat. In November 1968, Powell was again elected. On January 3, 1969, he was seated as a member of the 91st Congress; but he was fined $25,000 and denied seniority. In June 1969, the Supreme Court of the United States ruled that the House had acted unconstitutionally when it excluded Powell, a duly elected member.

In June 1970, Adam Powell Jr., was defeated in the Democratic primary by Charles B. Rangel. That fall, he failed to get on the November ballot as an Independent; and he resigned as minister at the Abyssinian Baptist Church.