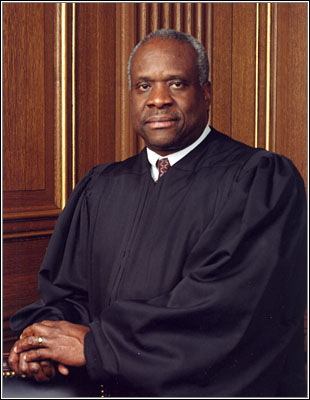 Clarence Thomas is an American jurist and has been an Associate Justice of the Supreme Court of the United States since 1991. He is the second African American to serve on the nation's highest court, after Justice Thurgood Marshall. Appointed by Republican President George H.W. Bush, Thomas's career in the Supreme Court has seen him take a conservative approach to cases while adhering to the principle of originalism.

Clarence Thomas was born on June 23, 1948, in Pin Point, Georgia. The second child and first son of M.C. Thomas and Leola Williams' three children, Clarence Thomas spent most of his childhood without his father who had abandoned the family when he was a young child.  Growing up in poverty, Clarence Thomas saw the difficulties of getting ahead for rural African Americans in the South. His mother worked as a maid and collected from church charities to support her family. At age seven, Thomas' mother decided to remarry after the family's wooden house burned to the ground. Thomas's mother sent him and his brother to live with their grandfather, Myers Anderson, in Savannah.

Clarence Thomas' grandfather provided a more steady environment and imparted upon his grandsons the importance of a good education. Thomas and his brother worked for their grandfather after school making fuel deliveries. In his spare time, Thomas often went to the local Carnegie library since the Savannah Public Library had not yet allowed blacks to enter.

At his grandfather's urgings to become a priest, Thomas left his black high school after two years to attend St. John Vianney Minor Seminary, an all-white boarding school located just outside of Savannah dedicated to training priests. Thomas suffered minor episodes of racism at his new school when his fellow schoolmates excluded him from social activities and made fun of his color.

Graduating with a good academic record, Thomas went on to attend the Immaculate Conception Seminary in Missouri, but soon left because of the the severe racism he encountered in the school. After taking some time off, Thomas enrolled at Holy Cross. He participated actively in the formation of the Black Student Union. Clarence Thomas also supported the Black Panthers and once urged a student walkout to protest investments in South Africa. In 1971, Thomas graduated ninth in his class with an English honors degree. Clarence Thomas completed his education at Yale Law School with a Juris Doctor (J.D.) degree in 1974, graduating towards the middle of his class.

In 1975, when Thomas read Race and Economics by economist Thomas Sowell, he found an intellectual foundation for this philosophy. The book criticized social reforms by government and instead argued for individual action to overcome circumstances and adversity. He was also influenced by Ayn Rand, particularly The Fountainhead, and would later require his staffers to watch the 1949 film version. Clarence Thomas later said that novelist Richard Wright had been the most influential writer in his life; Wright's books Native Son and Black Boy "captured a lot of the feelings that I had inside that you learn how to repress." Thomas also acknowledges having "some very strong libertarian leanings".

Clarence Thomas was admitted to the Missouri bar on September 13, 1974. From 1974 to 1977, Thomas was an Assistant Attorney General of Missouri under then State Attorney General John Danforth, an acquaintance from Yale Law School. Thomas was the only black member of Danforth's staff, first working at the criminal appeals division and later the revenue and taxation division. When Danforth was elected to the U.S. Senate in 1976, Thomas left to become an attorney with Monsanto Company in St. Louis, Missouri.

Clarence Thomas moved to Washington, D.C. and returned to work for Danforth in 1979  as a Legislative Assistant handling energy issues for the Senate Commerce Committee. Later Clarence Thomas' bond with John Danforth would to be instrumental in championing Thomas for the Supreme Court. In 1981, Thomas joined the Reagan administration, first as Assistant Secretary of Education for the Office for Civil Rights in the U.S. Department of Education, and then in 1982, he was Chairman of the US Equal Employment Opportunity Commission ("EEOC").

In 1990, President George H. W. Bush appointed Thomas to the United States Court of Appeals for the District of Columbia Circuit. When Thurgood Marshall retired from the Supreme Court, it gave President Bush the opportunity to replace one of the court's most liberal members with a conservative. The president was under significant political pressure to appoint another African American, and Thomas's service under Republican senators and presidents made him an obvious choice. Despite his appeal to Republican partisans, however, his nomination engendered controversy.

Having little experience as a judge, and a lack of judicial scholarship, mixed with the fact that Clarence Thomas refused to answer questions on how he felt about abortion, combined to cause many Senators to be hesitant in confirming him. The worst was yet to come, and when Anita Hill stepped forward and alleged in televised hearings that Thomas had made sexually offensive comments to her in an apparent campaign of seduction, all seemed lost. Clarence Thomas denied the charge and accused the Senate Judiciary Committee of engineering a “high-tech lynching.” A deeply divided Senate only narrowly confirmed Thomas's nomination by a vote of 52 to 48.

Although the controversy surrounding his appointment dissolved shortly after he joined the bench, Thomas will perhaps always be measured against the justice he succeeded. Ideologically, Thomas and Marshall were stark contrasts, and throughout his career Thomas worked against many of the causes championed by his predecessor. As one of the most reliable conservatives appointed by Republican presidents, Thomas generally followed a predictable pattern in his opinions, conservative, restrained, and suspicious of the reach of the federal government into the realm of state and local politics.