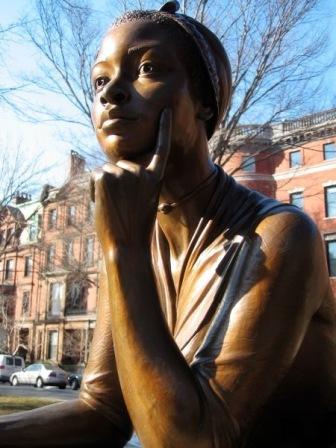 Though the exact birth date of Phillis Wheatley is not known, it is assumed that she was born in the year 1753, in Gambia (today Senegal), Africa. In the year 1761, she was abducted and taken to America, in a slave ship named 'Phillis'. Named after the boat she arrived on, Phillis was purchased by a wealthy Boston merchant, John Wheatley, who took her to work as a servant and an attendant to his wife, Susanna. As was the custom of the time, she was given the Wheatley family's surname.

The Wheatley family taught Phillis English and Christianity, and, impressed by her quick learning, they also taught her some Latin, ancient history, mythology and classical literature. She learned to speak and write English very quickly, taught by Mary Wheatley, the 18 year old daughter of her owner; within 16 months she could read difficult passages in the Bible. At 12 she began studying Latin and English literature, especially the poetry of Alexander Pope, soon translating Ovid into heroic couplets. These would have been remarkable accomplishments for an educated white male boy, and was virtually unheard of for white females.

Although treated kindly and educated, Phillis Wheatley was none the less a slave, stripped of all ties with her native land and family. Her situation was unusual. She was not really a part of the white Wheatley family, nor did she quite share the place and experiences of other slaves.

Phillis Wheatley wrote her first poem when she was thirteen years old. In 1767, the Newport Mercury published Phillis Wheatley's first poem, a tale of two men who nearly drowned at sea, and of their steady faith in God. Her elegy for the evangelist George Whitefield, brought more attention to Phillis Wheatley. This attention included visits by a number of Boston's notables, including political figures and poets. She published more poems and a collection of her poems "Poems on Various Subjects, Religious and Moral" was the first book to be published by a black American. It was published in London in 1773.

In 1768, Phillis Wheatley wrote the poem, 'To the King's Most Excellent Majesty', which was dedicated to George III, praising his decision for canceling the Stamp Act. Later, in 1770, after penning down a poem on the death of the evangelical preacher George Whitefield, she became an instant hit in Boston and received great admiration and acclaim for her work. However, her literary capabilities surprised many whites, who assumed that blacks were incapable of attaining an education, let alone being both talented and gifted in writing.

On Being Brought From Africa To America

'Twas mercy brought me from my pagan land,
Taught my beknighted soul to understand
That there's a God, that there's a Savior too:
Once I redemption neither sought nor knew.
Some view our sable race with scornful eye,
"Their color is a diabolic dye."
Remember Christians; Negroes, black as Cain,
May be refin'd, and join th' angelic train.

On October 18, 1773, Phillis Wheatley's life was forever changed. Her master's wife Susanna Wheatley passed away and she was granted her freedom. She married John Peters. Little is known of Peters, who was evidently handsome and educated, but unable to settle in any vocation. They lived in great poverty; she had three children and all died in infancy. She never found another patron for her poetry, though she continued to write poems, obscuring her own personal ordeals. She wrote over 100 poems, but at least 30 poems were evidently lost. Her long physical frailty, hard life and poverty led to her death at 31, with her third child dying shortly after.

The Revolutionary War added chaos and confusion to Phillis Wheatley's life and writing. She had the honor of appearing before General Washington in March, 1776 for her poetry and  was a strong supporter of independence during the Revolutionary War, but many of Phillis Wheatley's patrons were British or British sympathizers. Regardless of political views, in the end war became much more important than poetry in Colonial America. Although she continued to write, Phillis no longer had the success and acclaim she had previously enjoyed before the outbreak of war.

Phillis Wheatley believed slavery to be the issue which separated whites from true heroism One of her poems states: "whites can not "hope to find deivine acceptance with th' Almighty mind" when "they disgrace and hold in bondage Afric's blameless race."