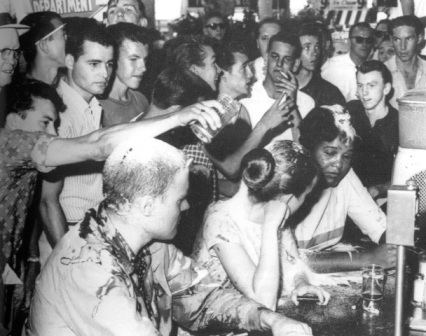 Anne Moody didn't just write about the civil rights, she lived it.  Anne Moody is a well known contemporary black native Mississippi author and civil rights leader. Her biographical  work depicts life in Mississippi and the struggles of black people in the South during the Jim Crow Era. Through her vivid writing, we can get a glimpse of the violent racism African Americans faced in their daily lives in Mississippi, and the courage they had to fight for their basic rights.  Although Anne Moody is a gifted writer, we have listed her in the Civil Rights section because that is how she saw herself.

Anne Moody's Coming of Age in Mississippi is an autobiographical book about life in Mississippi, the struggle of African Americans in the state and in the South, the life of a black child and woman in the South, and the role of race and racism in America. The book helps us to understand life in the South both before and during the Civil Rights Movement and shows the struggles and triumphs and also the enduring problems that came out of the Movement. It also shows racism from the perspective of a child.

Civil rights activist Anne Moody was born in rural Wilkinson County, Mississippi on September 15, 1940. Born Essie Mae Moody, she was the eldest of nine children. After her parents split up, she grew up with her mother, Toosweet, in Centreville, Mississippi, while her father lived in nearby Woodville, Mississippi. At a young age she began working for white families in the area, cleaning their houses and helping their children with homework for only a few dollars a week. After graduating with honors from a segregated, all-black high school, Anne Moody received a basketball scholarship and attended the all black Natchez Junior College in 1961.

From there Anne Moody went on to Tougaloo College on an academic scholarship and received her bachelor of science degree in 1964.  While at Tougaloo, Anne Moody became heavily involved with the civil rights movement. A top priority for Anne she volunteered with the Congress of Racial Equality (CORE), the National Association for the Advancement of Colored People, and Student Nonviolent Coordinating Committee. After graduating, Anne Moody became a full-time worker in the Civil Rights Movement, dedicated almost every waking minute to the cause. She met and worked professionally with top civil rights activists like Martin Luther King, Ralph Abernathy, and John Lewis.

Participating in the Woolworth's lunch counter sit-in and protests in Jackson, Mississippi Anne Moody put her life on the line for her beliefs. During Freedom Summer she worked for CORE in the volatile town of Canton, Mississippi, and participated in the March on Washington, hearing Dr. King give his famous "I've Got a Dream" speech. After her graduation in 1964 Anne Moody carried her civil rights activities north to Cornell University where she served as a civil rights project coordinator from 1964 to 1965.

In 1968 Anne Moody wrote her autobiography Coming of Age in Mississippi, an articulate and moving account of the often frustrating struggle of growing up black in the south. Anne Moody didn’t plan on being a writer. She says that she was “first and foremost an activist in the civil rights movement in Mississippi.”

When I could no longer see that anything was being accomplished by our work there, I left and went North. I came back to see through my writing that no matter how hard we in the movement worked, nothing seemed to change; that we made a few visible little gains; yet at the root, things always remained the same; and that the movement was not in control of its destiny, nor did we have any means of gaining control of it. We were like an angry dog on a leash that had turned on its master. It could bark and howl and snap, and sometimes even bite, but the master was always in control. I realized that the universal fight for human rights, dignity, justice, equality, and freedom is not and should not be just the fight of the American Negro or the Indians or the Chicanos. It's the fight of every ethnic and racial minority, every suppressed and exploited person, everyone of the millions who daily suffer one or another of the indignities of the powerless and voiceless masses.

Anne Moody had originally began her fight for civil rights as a direct result of Emmett Till, a 14-year-old African-American boy who was brutally murdered in 1955. Born near Chicago, Emmett Till was the only child of Louis  and Mamie Till. In August, 1955, 14 year old Emmett was sent to Mississippi to stay with relatives. During the evening of August 24th, Emmett, a cousin, Curtis Jones, and a group of his friends, went to Bryant's Grocery Store in Money, Mississippi. Carolyn Bryant later claimed that Emmett had grabbed her at the waist and asked her for a date. When pulled away by his cousin, Emmett allegedly said, "Bye, baby" and "wolf whistled". Bryant told her husband about the incident and he decided to punish the boy for his actions. The following Saturday, Roy Bryant and his half-brother, J. W. Milam, took Emmett from the house where he was staying and drove him to the Tallahatchie River and shot him in the head. After Emmett's body was found Bryant and Milam were charged with murder.

On  September 19th, 1955, the trial began in a segregated courthouse in Sumner, Mississippi. In court Mose Wright identified Bryant and Milam as the two men who took away his nephew on the 24th of August. Other African Americans also gave evidence against Bryant and Milam but after four days of testimony, the all white jury acquitted the men.

Anne Moody wrote several other books, including a collection of short stories called "Mr. Death." She was married to Austin Stratus but divorced him in March of 1967. They have one child named Sascha.

Anne Moody lived in New York until she passed away on February 5, 2015. Moody's works have interested people throughout the world. University students, as well as high school students, have read Coming of Age in Mississippi as a historical reference because Moody's writing allows the reader to visualize the civil rights events that occurred in the 1950's and 1960's.