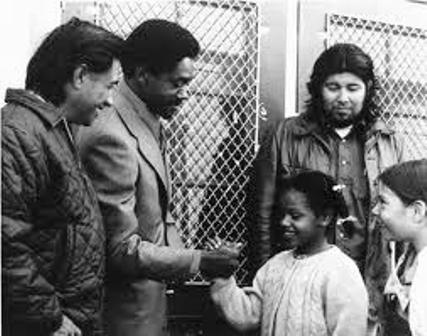 Bobby Seale and Huey Newton founded the Black Panther Party for Self-Defense at a community center in North Oakland, California, in October 1966, and acknowledged it was a living testament to the Work of Malcolm X. The Black Panthers practiced militant self-defense of minority communities against the U.S. government, and fought to establish revolutionary socialism through mass organizing and community based programs. The party was one of the first organizations in U.S. history to militantly struggle for ethnic minority and working class emancipation. The Black Panther agenda was the revolutionary establishment of real economic, social, and political equality across gender and color lines. The FBI labeled Seale and his colleagues in the Black Panthers as "Public Enemy Number One".

Robert George Seale was born on October 22, 1936, to a poor African American carpenter and his wife in Dallas, Texas. The Seale family moved to Port Arthur, Texas, and then to San Antonio, Texas, before finally settling in Oakland, California, during World War II. Attributing his failure to make the basketball and football teams to racial prejudice, Seale quit Oakland High School and joined the U.S. Air Force. After three years in the Air Force, Seale was court-martialed and given a bad conduct discharge for disobeying a colonel at Ellsworth Air Force Base in South Dakota.

In 1962, at the age of 25, Bobby  Seale began attending Oakland City College, located on Grove Street, near the Berkeley city limits, where he would join the Afro-American Association, (AAA) and as a result meet Huey Newton. Bobby Seale and co-member Huey Newton became increasingly skeptical about the direction of the AAA, and in particular, the AAA's tendency to analyze rather than act on the problems facing black Americans.

It was during this time at  College that Newton and Bobby Seale organized the Black Panther Party for Self Defense in October 1966. Based on a coin toss, Seale became Chairman and Newton became Minister of Defense.

Members of the Black Panther Party for Self Defense began patrolling the Oakland police. Guns were the essential ingredient on these patrols. Bobby Seale and other Black Panther members observed police procedure, ensured that African-American citizens were not abused, advised African-Americans of their rights, and posted bail for those arrested. In addition to patrolling the police, Newton and Seale were responsible for writing the Black Panther Party Platform and Program, which called for freedom, full employment, decent housing, education, and military exemption for African-Americans. But there was a darker side to the group, described in Former Panther Earl Anthony's book, Spitting in the Winds, a party created with the goal to organize America for armed revolution.

The Black Panthers had chapters in several major cities and had a membership of over 2,000. Harassed by the police, members became involved in several shoot-outs. Bobby Seale was one of the original "Chicago Eight" defendants charged with conspiracy and inciting to riot, in the wake of the 1968 Democratic National Convention, in Chicago. The evidence against Seale was slim, especially since Seale was a last minute replacement for Eldridge Cleaver and had only been in Chicago for two days of the convention.

Judge Julius Hoffman sentenced Bobby Seale to four years of imprisonment for contempt because of his outbursts, and eventually ordered Seale severed from the case, hence the "Chicago Seven". During the trial, one of Seale's many outbursts led the judge to have him bound and gagged, as commemorated in the song "Chicago" written by Graham Nash.

While serving his four year sentence, Seale was put on trial again in 1970 in the New Haven Black Panther trials. Several officers of the Panther organization had allegedly "executed" a fellow Panther, Alex Rackley, who had confessed to being a police informant. The leader of the murder plan, George Sams, Jr., turned state's evidence and testified that he had been ordered to kill Rackley by Seale himself, who had visited New Haven only hours before the murder. The New Haven trials were accompanied by a large demonstration in New Haven on May Day, 1970, which coincided with the beginning of the American college Student Strike of 1970. The jury was unable to reach a verdict in Seale's trial, and the charges were eventually dropped. Seale was released from prison in 1972.

After his release from prison, Bobby Seale renounced political violence and ran for Mayor of Oakland, California in 1973. He received the second most votes in a field of nine candidates, but ultimately lost in a run-off with incumbent mayor John Reading.