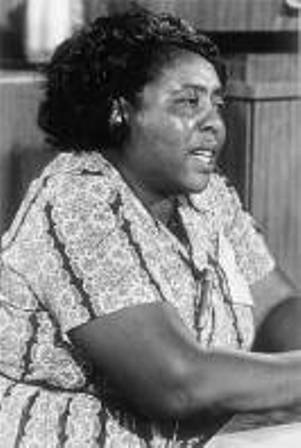 Fannie Lou Hamer was a voting rights activist and civil rights leader. She was instrumental in organizing Mississippi Freedom Summer for the Student Nonviolent Coordinating Committee (SNCC), and later became the Vice-Chair of the Mississippi Freedom Democratic Party, and attended the 1964 Democratic National Convention in Atlantic City, New Jersey, in that capacity. Her plain-spoken manner and fervent belief in the Biblical righteousness of her cause gained her a reputation as an electrifying speaker and constant champion of civil rights.

Fannie Lou Townsend was born in Mississippi on October 6, 1917. Born into a family of sharecroppers, she was working in the fields when she was six, the youngest sibling out of twenty. Only educated through the sixth grade, by the time she was ten, Fannie was picking as much cotton as some adults.  She later earned the better position of Timekeeper.

Fannie Lou married Perry “Pap” Hamer in 1942, and they adopted two children. In 1962, Fannie Lou. Hamer decided she wanted to try to register to vote after attending a Student Nonviolent Coordinating Committee (SNCC) voter registration meeting at William Chapel Church in Ruleville. Her decision on August 31, 1962 started a chain reaction of racism, violence, and at times even threatened her life. Leaving her house in Ruleville, Mississippi she and 17 others took a bus to the courthouse in Indianola, the county seat, to register to vote. During the ride she began singing Christian hymns, such as "Go Tell It on the Mountain" and "This Little Light of Mine," to the group in order to bolster their resolve. The hymns also reflected Hamer's belief that the civil rights struggle was a deeply spiritual one.

On their return home, police stopped their bus. They were told that their bus was the wrong color. Fannie Lou and the others were arrested and jailed. After returning home, Fannie Lou Hamer was ordered to go and take her name off the registrar’s book. If she refused to do so, she would have to move. Refuse she did and move she did. "I didn't go register for you sir, I did it for myself”, replied Fannie Lou to her boss, Mr. W. D. Marlowe. She was kicked off the plantation where she had lived for the past eighteen years.

Ten days later, night riders fired 16 bullets into the home of the Tucker family with whom she had gone to stay.  “God had already told me to move on, so I wasn’t there that night,” Fannie said. Inspired by the need for volunteers, Fannie Lou Hamer began working on welfare and voter registration programs for the Southern Christian Leadership Conference.

Hamer's courage and leadership in Indianola came to the attention of SNCC organizer Bob Moses, who dispatched Charles McLaurin from the organization with instructions to find "the lady who sings the hymns". McLaurin found and recruited Hamer, and though she remained based in Mississippi, she began traveling around the South doing activist work for the organization.

On June 9, 1963, Hamer was on her way back from Charleston, South Carolina with other activists from a literacy workshop. Stopping in Winona, Mississippi, the group was arrested on a false charge and jailed. Once in jail, Hamer and her colleagues were beaten savagely by the police, almost to the point of death.

Released on June 12, she needed more than a month to recover. Though the incident had profound physical and psychological effects, Fannie Lou Hamer returned to Mississippi to organize voter registration drives, including the "Freedom Ballot Campaign", a mock election, in 1963, and the "Freedom Summer" initiative in 1964. She was known to the volunteers of Freedom Summer, most of whom were young, white, and from northern states, as a motherly figure who believed that the civil rights effort should be multi-racial in nature.

Fannie Lou Hamer co-founded the Mississippi Freedom Democratic Party (MFDP). In 1964, the MDFP challenged the all-white Mississippi delegation to the Democratic National Convention. Hamer spoke in front of the Credentials Committee in a televised proceeding that reached millions of viewers. She told the committee how African-Americans in many states across the country were prevented from voting through illegal tests, taxes and intimidation. "If the Freedom Democratic Party isn't seated today, I Question America", Fannie told the Credentials Committee. "Is this America where we have to sleep with our phones off the hooks because we be threatened daily just cause we want to register to vote to become first class citizens". As a result of her speech, two delegates of the MFDP were given speaking rights at the convention and the other members were seated as honorable guests.

Fannie Lou Hamer’s efforts did not stop there. She challenged Black Educators to “teach our children more about our history since school books left it out”. She started a daycare center with the assistance of the National Council of Negro Women (NCNW) under the leadership of Dr. Height. Mrs. Hamer also, organized approximately, 640 acres of Freedom Farm land.

Mrs. Fannie Lou Hamer was the recipient of many awards and honors. She received an Honorary Degree of Doctor of Humanities from Tougaloo College and Shaw University. She, also, received honorary degrees from Columbia College and Howard University. Fannie was honored with the National Sojourner Truth Meritorious Service Award, The Paul Robeson Award from Alpha Kappa Alpha Sorority and The Mary Terrell Award from Delta Sigma Theta, Inc. Delta Sigma Theta made Mrs. Hamer an Honorary member of their sorority.

Fannie Lou was inducted into the National Women Hall of Fame. On February 18,1995, The United States Post Office in Ruleville, Mississippi was named in Fannie
Lou Hamer's honor thanks to Congressman Bennie Thompson.