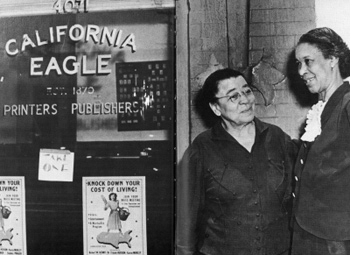 Charlotta Bass was an educator, newspaper publisher-editor, and civil rights activist. Bass was probably the first African American woman to own and operate her own newspaper in the United States; she published the California Eagle from 1912 until 1951. In 1952 Bass became the first African American woman nominated for Vice President, as a candidate of the Progressive Party.

Born Charlotta Amanda Spears in Sumter, South Carolina, in 1879 or 1880, Bass was the sixth of eleven children. At the turn of the century, Bass moved to Rhode Island. In 1910, she migrated to Los Angeles to improve her health.

John James Neimore had established The California Owl newspaper in 1879 in Los Angeles as a way to ease black settlers' transition to the West. The paper provided them with housing and job information, and other information essential to surviving in a new environment. When arriving in California Charlotta was first employed by The California Owl selling subscriptions, but soon she was wearing multiple hats, writing, editing, and doing anything else Neimore needed her to do.

Fulfilling the deathbed request of Neimore, Bass became the Owl's editor and publisher in March 1912, a career lasting over forty years until she sold the newspaper in 1951. In 1914, Charlotta hired and subsequently married Joseph Blackburn Bass, a Kansas newspaperman, who edited the paper until his death in 1934. They eventually changed the name of the paper to the California Eagle. The couple had no children, but Charlotta Bass was very close to her nephew John Kinloch, who also worked at the paper. The California Eagle evolved into one of the leading papers of the day while under the control of Charlotta A. Bass and her husband, John Bass.

The California Eagle had a tradition of fighting for racial equality and against discrimination and Bass continued this tradition under her leadership. During the early 1900s California had attracted many African-American settlers who were heading west in search of better economic opportunities than were available in the South. The black community in Los Angeles was growing rapidly and African Americans experienced high home ownership rates in this booming city. However, Bass and other African-American intellectuals such as W.E.B. Du Bois were not shy to point out that while California offered many opportunities for blacks, there was still a considerable amount of discrimination.

In 1914 articles and editorials were published in opposition to the making of D. W. Griffith's film "Birth of A Nation" with its derogatory portrayals of African Americans and celebratory depiction of Klu Klux Klan violence. This campaign was joined by other African American newspapers across the nation, and led to the banning of "Birth of A Nation" in some communities.

As editor and publisher of the California Eagle, Charlotta Bass fought against restrictive covenants in housing and segregated schools in Los Angeles. She had also taken part in successful campaigns to end job discriminations at the Los Angeles General Hospital, the Los Angeles Rapid Transit Company, the Southern Telephone Company, and the Boulder Dam Project.

Charlotta Bass was co-president of the Los Angeles division of Marcus Garvey's Universal Negro Improvement Association during the early 1920s, and was a West Coast promoter of the "Don't Buy Where You Can't Work" campaigns of the mid to late 1930s.

Bass paid a price for her outspokenness. Her life was threatened on numerous occasions. The FBI placed her under surveillance on the charge that her newspaper was seditious and continued to monitor her until her death. Accused of being a Communist, in 1950, she was called before the California Legislature's Joint Fact-Finding Committee on un-American Activities. The accusations began to take a toll on her effectiveness in the community and her ability to sell her newspaper.

Charlotta Bass wrote her last column for the California Eagle on April 26, 1951, and sold the paper soon after. Charlotta wrote: "It has been a good life that I have had, through a very hard one, but I know the future will be even better, And as I think back I know that is the only kind of life: In serving one's fellow man one serves himself best ." When The California Eagle shut down its presses in 1964, it was one of the oldest black-owned and operated papers in the United States.

Bass devoted her remaining years to politics. In 1952 Charlotta Bass served as the National Chairman of the Sojourners for Truth and Justice, an organization of black women set up to protest racial violence in the South. After years as a registered Republican, she left the party in 1948. In the Progressive Party presidential campaign of 1952, Charlotta Bass was the running mate of lawyer Vincent Hallinan.

In the early 1960's Charlotta Bass retired and moved to Lake Elsinore, California, where she continued her civil rights activism. She turned her garage into a community reading room and a voter registration site for African Americans, and joined protests against South African apartheid and on behalf of prisoners' rights.