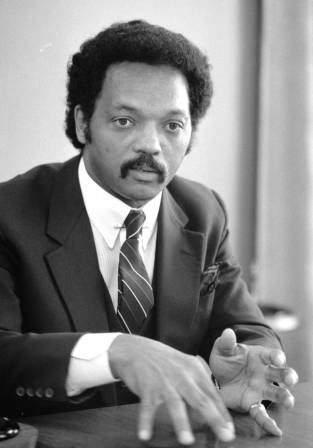 The Reverend Jesse Louis Jackson Sr. emerged as a leader during the Civil Rights movement. In a long career alternately marked by success and controversy, Jackson founded economic justice organizations, ran for president twice, and negotiated with a host of foreign leaders. Jackson’s distinctive and powerful speaking style is characterized by wordplay, rhyming couplets, and the phrase “I am somebody,” a refrain aimed at cultivating the self-worth of dispossessed youth.

Jesse Louis Burns was born in Greenville, South Carolina, on October 8, 1941. His mother, Helen Burns, was only 16 and unwed at his birth.  Her pregnancy dashed the hope that Helen, born when she herself was only 13, would attend college on a singing scholarship. Jesse’s biological father, Noah Robinson, was a married man who lived next door with his wife and stepchildren. Robinson, a former boxer and a well known figure in Greenville’s black community, acknowledged his paternity, however he had little contact with Jesse. In 1943, Jesse’s mother married Charles Jackson, who later adopted Jesse when he was about 15. Jesse had one half brother from his parents, Charles Jackson Jr., and three half brothers from his father's side.

Jesse Jackson graduated from Sterling High School in Greenville in 1959. A distinguished student leader and athlete, he chose a football scholarship to the University of Illinois over a professional baseball contract. Jackson traced his first integration protest to his attempt to take books out of the Greenville library over winter break. He left Illinois after one year and transferred to the historically black North Carolina Agricultural and Technical College in Greensboro. At his new school, Jackson became student body president and met Jacqueline (Jackie) Lavinia Brown, who became his wife. The two were active in the civil rights movement and participated in sit-in movements to integrate public facilities in Greensboro. Jackson graduated with a sociology degree in 1964.

Following his graduation from North Carolina Agricultural and Technical College, Jackson attended the Chicago Theological Seminary with the intent of becoming a minister, but dropped out in 1966 to focus full time on the civil rights movement. He was ordained in 1968, without a theological degree; awarded an honorary theological doctorate from Chicago in 1990; and received his Master of Divinity Degree based on his previous credits earned, plus his life experience and subsequent work, in 2000.

It was in 1965 that Jesse Jackson first met Dr. Martin Luther King, Jr., while at the famous Selma March in Alabama. Jesse Jackson become heavily involved in the Southern Christian Leadership Conference, which was ran by Dr, King. He threw himself into SCLC's effort to establish a beachhead in Chicago. That same year Jackson was also made the leader of the Chicago branch of Operation Breadbasket, which was established by Martin Luther King, Jr. in 1962. Operation Breadbasket was a civil rights group that's key goal was to use boycotts as a means to pressure white businesses to hire blacks and purchase goods and services from black contractors.

In 1968, After the assassination of Dr. King, Jesse Jackson increasingly clashed with Ralph Abernathy, King's successor as chairman of SCLC. In December, 1971, they had a complete falling out. Ralph Abernathy suspended Jackson for “administrative improprieties and repeated acts of violation of organizational policy.” Jackson resigned, called together his allies, and Operation PUSH was born during the same month. People United to Save Humanity was organized in the home of Dr. T.R.M. Howard who also became a member of the board of directors and chair of the finance committee.

Jackson also began to travel abroad, developing a vision that incorporated all the world’s oppressed poor. In 1972, he initiated such travel with a trip to Liberia. In 1979, he spoke in South Africa against apartheid. The same year, Jesse Jackson traveled to the Middle East and compared the conditions of the Palestinians to African Americans’ plight in the United States. A picture of him hugging PLO leader Yasser Arafat caused a major controversy and became for many American Jews a lingering source of distrust of Jackson. During that visit the Israeli government refused to see him, but he made several return trips in which he met with both governments and attempted to spread the Civil Rights movement’s concepts of nonviolent resistance and radical love as a political weapon to the Palestinian-Israeli conflict.

In 1984, Jackson organized the Rainbow Coalition, which later merged, in 1996, with Operation PUSH. The newly formed Rainbow PUSH organization brought his role as an important and effective organizer to the mainstream.

Although he has never held public office, Jesse Jackson made two noteworthy bids for the Democratic nomination for president in the 1980s. In 1984, Jackson became the second African American, after Shirley Chisholm, to mount a nationwide campaign for President of the United States, running as a Democrat.

In the primaries, Jackson, who had been written off by pundits as a fringe candidate with little chance at winning the nomination, surprised many when he took third place behind Senator Gary Hart and former Vice President Walter Mondale, who eventually won the nomination. Jackson’s presidential bid got a boost from his negotiation to release Robert O. Goodman Jr., a black lieutenant shot down and captured by Syria. Jackson accused the government of working less assiduously for Goodman’s release than they would have if he were white. The Reagan administration decried his trip as reckless, but Jackson succeeded in obtaining his release.

Jackson garnered 3,282,431 primary votes, or 18.2 percent of the total, in 1984, and won five primaries and caucuses, including Louisiana, the District of Columbia, South Carolina, Virginia, and one of two separate contests in Mississippi. At The Democratic National Convention, Jackson said, "This is not a perfect party. We are not perfect people. Yet we are called to a perfect mission: our mission to feed the hungry; to clothe the naked; to house the homeless; to teach the illiterate; to provide jobs for the jobless; and to choose the human race over the nuclear race."

In 1988 Jesse Jackson made his second attempt at the US presidency. When 800 townspeople in Greenfield, Iowa, forewent the Super Bowl to hear Jackson speak, he made Greenfield his Iowa headquarters and soon was running second only to Richard Gephardt in the 97 percent white state. Jesse Jackson did better than expected on Super Tuesday, ending the day with more of the popular vote than any other Democrat. He followed that performance by claiming 55 percent of the vote in Michigan and briefly looked like the frontrunner. Jackson eventually lost the nomination to Michael Dukakis, but along the way, he finished second with almost 7 million primary votes, about 2 million of them from whites. Jackson was disappointed not to be offered the vice presidential slot. Nevertheless, he threw himself into the Democratic campaign, logging more miles on Dukakis’s behalf during the general election campaign than the candidate did.

Throughout his career as a political and social activist, Jackson has also been a prominent figure in international diplomacy. In May of 1999, Jackson traveled to war-torn Sierra Leone, where he negotiated a cease-fire agreement between Tejan Kabbah, the country's president, and rebel Foday Sankoh. Jackson also negotiated for the release of more than two thousand prisoners of war. One year later, he returned to Sierra Leone to assist once more in the country's peace process.

Jackson has stirred both admiration and criticism. His behavior in the hours immediately following the assassination of Martin Luther King Jr., was a subject of controversy: Jackson claimed that he had held the dying leader, heard his last words, and had his shirt stained by King's blood. Other SCLC officers present at the murder have disputed those claims. However, the same driving ambition to achieve success that is the root of Jackson's weaknesses is also the source of his strength. He is a tireless worker who is fiercely committed to his causes. He is an intelligent, creative, and charismatic leader, and an inspirational speaker.