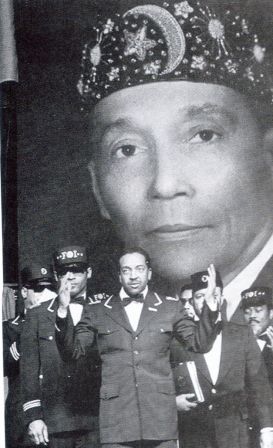 One of 13 children, Elijah Robert Poole was born in Sandersville, Georgia on October 7, 1897. His parents were sharecroppers and former slaves, his father William Poole, was also a Baptist preacher. Poole's formal education ended at the fourth grade. To support the family, he worked with his parents as a sharecropper. When he was sixteen years old, he left home and began working in factories and at other businesses.

Elijah Poole married Clara Evans on March 7, 1917. Part of the Great Migration, Elijah Poole and his wife moved north to Detroit Michigan In 1923. Wanting to leave the Jim Crow South, Poole later said, "I seen enough of the white man's brutality to last me 26,000 years". Elijah Poole struggled to find and keep enough work to provide for his wife and eight children, especially during the Great Depression.

In 1930, Elijah Poole met Fard Muhammad, also known as W. D. Fard, who had founded the Lost-Found Nation of Islam. Poole soon became Fard's top organizer and follower. Master W. Fard Muhammad gave him the name "Karriem" and made him a minister. Later he was promoted to the position of "Supreme Minister" and his name was changed to Muhammad. "The name 'Poole' was never my name," he would later write, "nor was it my father's name. It was the name the white slave-master of my grandfather after the so-called freedom of my fathers." An absolute believer in the Islam religion Elijah Muhammad was arrested for contributing to the delinquency of a minor because he sent his children to the University of Islam instead of to public schools.

Settling in Chicago, away from hostile Muslim factions in Detroit, Muhammad built what quickly became the most important center of the movement. Chicago soon featured not only a Temple of Islam, but a newspaper called Muhammad Speaks, a University of Islam, which was actually a private elementary and high school, and several movement-owned apartment houses, grocery stores, and restaurants. In 1934, Elijah Poole returned to Detroit, and a few months later W. D. Fard mysteriously disappeared, his whereabouts never known. Some political and theological rivals accused Poole of foul play, though no evidence ever surfaced. Elijah Muhammad decided to return to Chicago and run the Nation of Islam from there.

Elijah Muhammad revised the theology of the movement, proclaiming Fard as  the earthly incarnation of Allah, the Muslim name for God, and named himself Allah's divinely appointed prophet. Elijah Muhammad also taught that blacks constituted the original human beings, but that a mad black scientist named Yakub had created a white beast through genetic manipulation and that whites had been given a temporary dispensation to govern the world. It was understood that violent war would be likely before the transition could be completed. In the meantime, Muhammad advocated an independent nation for African Americans.

As the movement grew, Temples were opened in other cities, and farms were purchased so that ritually pure food could be made available to members. The movement was a sharply disciplined one. Members had strict rules to follow regarding eating where various foods, such as pork, were forbidden. Smoking, drinking, drugs, the use of profanity, gambling, listening to music, and dancing were all outlawed. The religion also required conservative, neat clothing and good grooming.

In 1942 Muhammad was one of a group of militant African American leaders arrested on charges of sedition, conspiracy, and violation of the draft laws. He was accused of sympathizing with the Japanese during World War II and of encouraging his members to resist the military draft. He had, indeed, argued that all nonwhites are oppressed by whites, and that it made no sense for African Americans to fight those who were victims of white racism as much as they themselves were. Muhammad was certainly no pacifist, but he argued that the only war in which African Americans should participate would be the coming "Battle of Armageddon," in which blacks would reassert their rightful superiority. For his words and actions Muhammad spent four years, from 1942 to 1946, in federal prison at Milan, Michigan.

Malcolm X began to study the teachings of NOI leader Elijah Muhammad while imprisoned for crimes he committed in Harlem. By the time he was paroled in 1952, Malcolm X was a devoted follower. In the late 1950s Malcolm X emerged as the most important figure after Elijah Muhammad in the Nation of Islam. He went on several speaking tours and helped establish several new mosques. He was eventually assigned to be minister of the mosque in New York's Harlem area.

Elijah Muhammad moderated the Nation's criticism of whites without compromising its message of black integrity. When Muhammad died on February 25, 1975, the Nation was an important religious, political, and economic force among America's blacks, especially in this country's major cities.