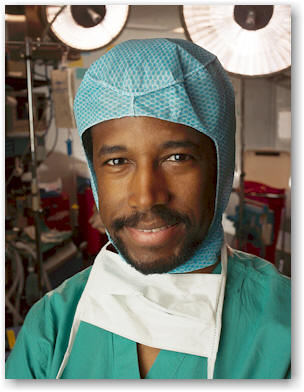 Dr. Benjamin S. Carson is a gifted African American neurosurgeon who changed brain surgery forever by his gifted abilities. Dr. Benjamin S. Carson's expertise is widespread in the area of the brain. He is a foremost expert in performing hemispherectomies which seperates the brain and aids people suffering from severe seizures.Dr. Carson may be best known for leading a surgical team in a successful operation to separate Siamese twins. He is is the director of pediatric neurosurgery at Johns Hopkins University Hospital as well as assistant professor of neurosurgery, oncology, and pediatrics at the School of Medicine.

Born on September 18, 1951, Benjamin Solomon Carson came from a poor family in Detroit. He was the second son of Robert Solomon Carson, a Baptist minister, and Sonya Copeland Carson. His father was twenty-eight when he married, but his mother was only thirteen; she married in order to escape a difficult home situation. When Carson was only eight years old and his brother, Curtis, was ten, their parents >divorced and his mother took them to live with relatives in a Boston tenement, while she rented out their house in Detroit. Working as many as three domestic jobs at a time, she earned enough money to move her family back to Detroit two years later.

Both Ben Carson and his brother had a difficult time in school, and their low grades fanned the racial prejudice against them. Ben was also known to have a nasty temper and had been known to attack other children, and even his mother at the slightest provocation. But their mother took charge of their education, even though she herself had not gone past the third grade. By limiting the television they could watch and insisting they both read two books a week and report on them, she helped them raise their grades considerably. Carson discovered he enjoyed learning, and by the time he reached junior high school he had risen from the bottom to the top of his class.

After graduating with honors from his high school, Benjamin Carson attended Yale University, where he earned a degree in Psychology. From Yale, he attended University of Michigan Medical School, where his interest shifted from psychiatry to neurosurgery. Carson's excellent hand-eye coordination and three-dimensional reasoning skills made him a gifted surgeon. After medical school Dr. Benjamin Carson became a neurosurgery resident at the top-ranked Johns Hopkins Hospital in Baltimore. At age 32, Dr. Carson became the hospital's youngest Director of Pediatric Neurosurgery.

In 1987, Dr. Benjamin Carson made medical history by being the first in the world to successfully separate a pair of Siamese twins joined at the head. The Binder twins were born joined at the back of the head. Operations to separate twins joined in this way had always failed, resulting in the death of one or both of the infants. Carson agreed to undertake the operation. A 70-member surgical team, led by Dr. Carson, worked for 22 hours. At the end, the twins were successfully separated and can now survive independently.

It was a milestone in neurosurgery, but was far from the only noteworthy achievement of Carson's career. He also performed ground-breaking surgery on a twin suffering from an abnormal expansion of the head. Carson was able to relieve the swelling and remove the surplus fluid-all while the unborn twin remained in its mother's uterus. This too was a first, and in other instances Dr. Carson has performed operations which have greatly expanded scientific knowledge of the brain and its functions. His "can-do" spirit, combined with his medical expertise, has made him the surgeon of choice for parents with children suffering rare neurological conditions.

Carson married Candy Rustin, whom he had met while at Yale, in 1969. She holds an M.B.A. degree and is an accomplished musician, and both are members of the Seventh-day Adventist Church, a Christian denomination. They have three sons, Murray, Benjamin Jr., and Rhoeyce.

Carson has written three bestselling books published by Zondervan, an international Christian media and publishing company: Gifted Hands, The Big Picture, and Think Big. The first book is an autobiography, and the other two are about his personal philosophies of success that incorporate hard work and a faith in God.

In 2001, Dr. Carson was named by CNN and TIME Magazine as one of the nation’s 20 foremost physicians and scientists. That same year, he was selected by the Library of Congress as one of 89 "Living Legends" on the occasion of its 200th anniversary. He is also the recipient of the 2006 Spingarn Medal which is the highest honor bestowed by the NAACP. In February, 2008, Dr. Carson was presented with the Ford’s Theatre Lincoln Medal by President Bush at the White House.