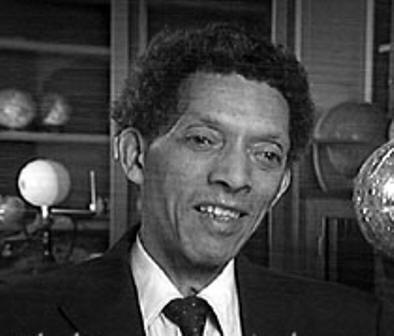 George Carruthers is an African American inventor, physicist, and space scientist. He has gained international recognition for his work which focuses on ultraviolet observations of the earth's upper atmosphere and of astronomical phenomena. George Carruthers first major contribution to science was to lead the team that invented the far ultraviolet camera spectrograph. Dr. Carruthers received a patent for his invention the "Image Converter for Detecting Electromagnetic Radiation specially in Short Wave Lengths" on November 11, 1969. He also developed the first moon based space observatory, an ultraviolet camera that was carried to the moon by Apollo 16 astronauts in 1972.

George Robert Carruthers was born in Cincinnati, Ohio on October 1, 1939. His father was a civil engineer and his mother was a homemaker. The family lived in Milford, Ohio until Carruthers' father died suddenly and his mother moved the family back to her native Chicago. At an early age George developed an interest in physics, which his father encouraged. Also as a child, he enjoyed visiting Chicago museums, libraries and the planetarium that caused him to be an avid science-fiction reader and enjoyed constructing model rockets. Later he became a member of the Chicago Rocket Society and various science clubs. George Carruthers built his own telescope at the age of ten, and went on to win numerous science fair awards.

In 1964, George Carruthers began work for the Naval Research Laboratory in Washington, D.C. where his work focused on far ultraviolet astronomy. In 1969, he received a patent for his invention, the "Image Converter," which detected electromagnetic radiation in short wave lengths, and in 1970, he made the first observation of molecular hydrogen in space.

For George Carruthers, growing up in the earliest stages of the space race, he has always been fascinated with space travel, and would ultimately go on to make some of the greatest contribution to ever benefit the space program. In 1972, George Carruthers invented the first moon-based observatory, the Far Ultraviolet Camera, which was used in the Apollo 16 mission. The camera (shown here) weights 50 pounds, is gold-plated and only works on the moon. The camera used in the Apollo 16 mission produced about 200 photos revealing new features of Earth’s far-outer atmosphere, as well as deep-space objects from the perspective of the lunar surface. "People sort of expected to see what we saw, but even so, just having the first pictures that actually verified that, was very exciting," says Carruthers. It also produced new far ultraviolet images of stars, nebulas, and galaxies, as well as new views of the Earth. As Dr. Carruthers explains, "the far ultraviolet... is of great importance to the astronomer because it allows the detection and measurements of common elements (hydrogen, oxygen, nitrogen, carbon, and many others) in their cool, unexcited state... This allows more accurate measurements of the compositions of interstellar gas, planetary atmospheres, etc. The ultraviolet also conveys important information on solid particles in interstellar space... and provides for much more accurate measurements of the energy output of very hot stars..."

Although the camera itself was left behind, a second version was used aboard the final Skylab flight in 1973 to obtain images of Comet Kohoutek. Carruthers has also been involved in numerous sounding rocket and space shuttle flights utilizing his cameras. In 1986, one of Carruthers' cameras captured an ultraviolet image Halley's Comet, and later in 1991, he invented a camera that was used in the Space Shuttle Mission.

In the 1980s, George Carruthers helped create a program called the Science & Engineers Apprentice Program, which allows high school students to spend a summer working with scientists at the Naval Research Laboratory. He also helped develop a series of videotapes on Earth and Space science for high school students.

George Carruthers continues to blend his love for science and that of teaching, and is currently teaching a two-semester course in Earth and Space Science at Howard University, sponsored by a NASA Aerospace Workforce Development Grant. Lauded for his efforts and achievements, George Carruthers was named Black Engineer of the Year in 1987, awarded the Arthur Fleming Award in 1971, the Exceptional Achievement Scientific Award from NASA in 1972, the Warner Prize in 1973 and was inducted into National Inventors Hall of Fame in 2003. His success is primed to lead to greater achievements by those who follow in his footsteps in the future.