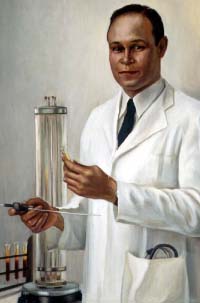 Dr. Charles Drew was an African-American physician, surgeon and medical researcher. The American Red Cross blood program in place todayis a direct result of the work of medical pioneer Dr. Charles Drew. Dr. Drew was instrumental in developing blood plasma processing, storage and transfusion therapy. His groundbreaking work in the large-scale production of human plasma was eventually used by the U.S. Army and the American Red Cross as the basis for blood banks.

Charles Richard Drew was born June 3, 1904 in Washington D.C. to Richard Y. Drew and Nora Burrell. As a child Charles Drew attended Meads Mill Elementary School, working as a paperboy selling copies of the Washington Times-Herald after school. In 1918, he enrolled at Dunbar High School, a racially segregated high school with a reputation for being one of the strongest academic Black public schools in the country. Drew’s sister Elsie, who was ailing with tuberculosis, died of pandemic influenza in 1920. Her death was said to influence his decision to study medicine.

An all round athlete, Charles Drew won a  partial scholarship to Amherst College in Massachusetts, where he was a star athlete, all-American half-back and captain of his Amherst College football team. Drew became a member of Omega Psi Phi Fraternity, Inc.

After graduation, Charles Drew was a coach and a biology and chemistry instructor at Morgan State College, Baltimore, Maryland. But a turning point in his life was at hand. It had become his ambition to enter the field of medicine. He resigned his job at Morgan State and went to Montreal, Canada, where he enrolled in McGill University's Medical School. There he was granted two fellowships and was awarded his doctorate of medicine and master of surgery degrees.

Dr. Drew began postgraduate work and earned his Doctor of Science in Surgery degree at Columbia University. His doctoral thesis, "Banked Blood: A Study in Blood Preservation" was based on an exhaustive study of blood preservation techniques, which began at McGill University. It was while he was engaged in research at Columbia's Presbyterian Hospital that his ultimate destiny in serving mankind was shaped. The military emergency of World War II, demanding a vital need for information and procedures to preserve blood, made Dr. Drew the "man of the hour".

As the European war scene became more violent, and the need for blood plasma intensified, Dr. Drew was selected to become full-time Medical Director of the Blood for Britain Project. In February 1941, he was appointed Director of the first American Red Cross Blood Bank in charge of blood for use by the U.S. Army and Navy. Dr. Drew resigned his position with the American Red Cross Blood Bank after the War Department sent out a directive stating that blood taken from white donors should not be mixed with that of Black donors. This issue caused widespread controversy.

In 1943 Dr. Charles Drew was selected as the first black surgeon to serve as an examiner on the American Board of Surgery. Drew had a lengthy research and teaching career, and became a chief surgeon.

Beginning in 1939, Dr. Drew attended the annual free clinic at the John A. Andrew Memorial Hospital in Tuskegee, Alabama. For the 1950 Tuskegee clinic, Drew and three other black physicians decided to drive rather than fly. Drew was driving around 8 a.m. on April 1. Still fatigued from spending the night before in the operating theater, Drew lost control of the vehicle, after somersaulting three times the car landed in a near by ditch. The three other physicians suffered minor injuries. Drew was trapped with serious wounds; his foot had become wedged beneath the brake pedal.

By the time emergency technicians found him, Drew was in shock and barely alive due to severe leg injuries. He was taken to Alamance General Hospital in Burlington, North Carolina. and pronounced dead a half hour after he first received medical attention. Contrary to urban legend, Drew was well treated by the hospital. Dr. Drew's funeral was held on April 5, 1950, at the Nineteenth Street Baptist Church in Washington, DC.