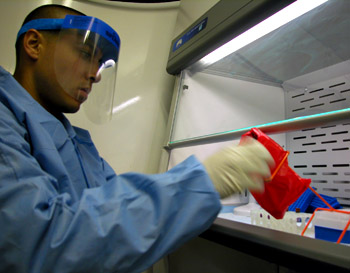 Health physics is a profession devoted to the protection of people and the environment from the harmful effects of radiation, thus providing for the utilization of radiation for the benefit of mankind. The profession, as we know it, began during World War II when the tremendous power available from nuclear energy was first being developed for weapons. The radiation hazards encountered during the early years of atomic energy were solved by the cooperation of physicists, chemists, biologists, engineers, and physicians. From this endeavor emerged the interdisciplinary specialty known as "health physics."

Roscoe L. Koontz was born in St. Louis, Missouri in 1922. Graduating from Vashon High School in St. Louis, Koontz spent three years in the army during World War II. While in the service, he received technical training through a special pre-engineering army training program at West Virginia State College. Upon discharge from the army in 1946, he returned to Tennessee State University and graduated with a Bachelor of Science in Chemistry.

Roscoe Koontz was among the first formally trained health physicists through his participation in the first Atomic Energy Health Physics Fellowship Training Program, sponsored at the University of Rochester in 1948. He designed a pinhole gamma ray camera and collimator and helped to design and fabricate automatic air and water sampling equipment and radiation activity measuring devices

Health Physics became a recognized profession around 1942. Together with their instructors, the early students, like Koontz, originated many of today's practices, instrumentation and techniques to protect people from the hazards of ionizing radiation.

Roscoe Koontz went on to be an engineer with Atomics International. His responsibilities included planning, directing and controlling all contract efforts on the design of the radioactive waste and sodium disposal system of the Clinch River Breeder Reactor in Oak Ridge, Tennessee. The breeder reactor is not yet a fully developed commercial reactor, and its development is important to help stretch the nation's nuclear energy resources from decades to hundreds of years.

Today, the use of radiation in medicine, industry, and research benefits all of us. To assure that radiation and radioactive materials are used safely, nuclear facilities and research laboratories demand personnel who understand the many types of radiation hazards and who know how to prevent and control them.